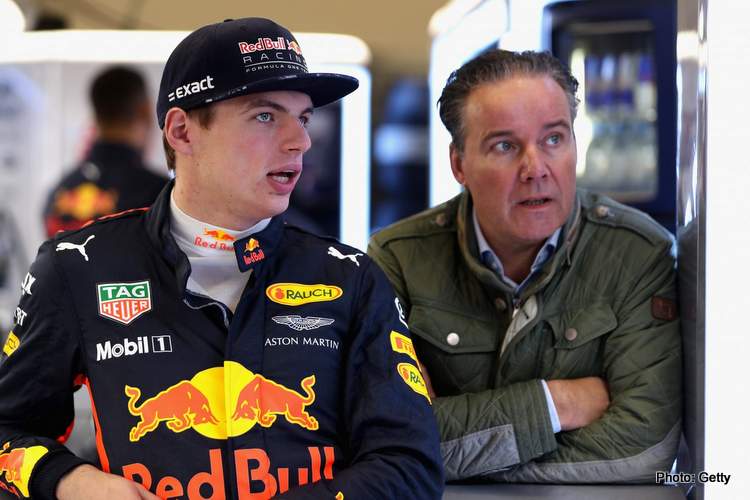 Max Verstappen’s co-manager Raymond Vermeulen revealed that the new multi-million dollar contract with Red Bull, confirmed yesterday, was negotiated with very little fuss and will keep the Dutchman with the team until the end of 2023.

It is widely reported that Verstappen’s salary will be around $16-million per year as he ends speculation of a potential Mercedes switch any time soon.

“Max, Jos and I agreed fairly quickly that this was the best choice,” said Vermeulen, who co-manages Verstappen with the 22-year-old’s father Jos.

“We had the first non-committal conversation over dinner with Helmut (Marko) in Brazil,” he told the Dutch publication Formule1. “Then it was a process. We held several internal discussions with each other about the short, medium and long-term vision.”

Honda was a key part of the deal, as it is believed that the Verstappen camp has engineered an exit clause for if the Japanese manufacturer quits after 2021.

“We have every confidence about Honda’s development,” Vermeulen said. “We think we have unfinished business with Red Bull and Honda.

“Red Bull helped us get into Formula 1 and we also have a fantastic commercial partnership, but the most important thing is to win. Max also feels like a fish in water with the team,” he added.

Meanwhile, former F1 driver Mika Salo has backed Verstappen’s decision to commit to Red Bull for the next four seasons.

Some were surprised that the 22-year-old Dutchman committed so early, as he was strongly linked with a potential move to world champions Mercedes.

But Salo told C More: “Red Bull has been able to guarantee Verstappen good money and a good car. They need Max.

“I think the situation is satisfactory to Max in every way so it was quite expected. Now he can concentrate on the season,” the veteran of over 100 grands prix told the Finnish broadcaster.

“He knows it will be hard work for the next three years. The agreement gives everyone security,” Salo added.

Salo also played down suggestions that Verstappen’s new deal will have a big impact on the next fascinating rumblings in the 2021 driver market, “It really doesn’t change anything

“It was quite expected that Max would stay there. Everything else is still open. Pretty much everyone else’s contract is ending,” added Salo.

Big contracts needing to be renewed for 2021 include the highest paid duo in F1, Lewis Hamilton and Sebastian Vettel. While the Briton is likely to sign an extension that will see him with the World Champions for at least another two seasons.

The future of Vettel is uncertain from extreme predictions he will quit at the end of the season, or return to Red Bull. While the German decides his future beyond this year, Charles Leclerc’s extension with Ferrari until the end of 2024 is a clear signal of intent from the Italian team.

Whatever the ‘Old Guard’ decides will not impact the fact that the sport’s brightest stars are, for now, committed to teams for the foreseeable future and well into the new era that kicks off next year.