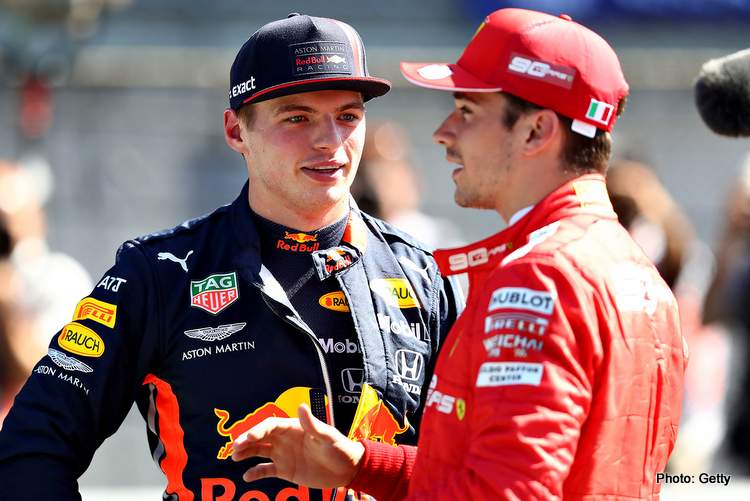 It doesn’t really sound like a revolutionary statement to observe that the decision-makers at Ferrari and Red Bull are pretty damn smart.

Both are among the grandee three teams, both have bursting trophy cabinets and ridiculous budgets, and both have kicked off 2020 by doing an eminently intelligent thing – snapping up the two best drivers in Formula 1.

Now, to observe that Max Verstappen and Charles Leclerc are the best drivers in the field right now might sound controversial, given the fact that Lewis Hamilton is clearly the Senna, Schumacher or Fangio of his respective era.

But I would like to humbly argue that, if a team boss has a brain (and typically they do), he would obviously snap up Max or Charles over Lewis every day of the week and twice on Sunday. And that is exactly what has happened.

Yes, Hamilton is a F1 great – there’s no doubt about that anymore. But the guy just turned 35 – an age exactly halfway between most athletes’ absolute peak and that terrible and inevitable ‘over the hill’ moment when he realises it’s better to call it a day than become greying and desperate.

And if you believe in conspiracy theories, it might be worth noting that Hamilton blew out the many candles on that fire-hazard of a birthday cake on the very day that Red Bull captured Verstappen – his potential successor as the next Senna, Schumacher and Fangio – for the next four full seasons. It almost certainly wasn’t designed like that, but it’s certainly pretty symbolic.

But why exactly are Leclerc and Verstappen’s long-term contracts so significant for Lewis?

Because, despite all the kissy-kissy eyelid-flapping exchanged between Hamilton and Ferrari at the ass-end of 2019, Leclerc’s signing, in particular, is the loud sound of a firmly slammed door to Maranello in Lewis’ face. It’s an obvious ‘Thanks, but nah’ to a guy who just weeks ago was openly flirting with the idea of doing his last hurrah in red overalls.

You may not believe that either Ferrari or Hamilton were ever serious in the slightest about linking up for 2021, and I tend to agree with you. But it definitely ain’t gonna happen now. And the reason is that, 22+ years ago, racing driver Herve Leclerc knocked up a hairdresser called Pascale in the beautiful principality of Monaco.

And the road to greatness of their child, Charles, was not going to be blocked by an ageing Lewis Hamilton’s desire to add a red overall to his future museum, just for kicks.

Lewis has a habit of saying he doesn’t care who his teammate is, but that’s just ridiculous. He will never go to Ferrari when Leclerc is there, and when Leclerc is no longer there, the multiple world champ will be 40.

Yes, he had to take on Fernando Alonso in 2007, but there’s no way on earth Ron Dennis thought the brilliant-but-bastard reigning world champion (at the time) would be challenged by his pet project in Lewis’ rookie year.

How can we be sure? Because the obsessed-with-detail Dennis completely effed it all up, and Fernando and Ron could hardly wait to never see each other again (for a while, as it happened) at the end of that horrible season.

Hamilton, I have no doubt, has absolutely no intention of putting the deservedness of his six world championships on the line by going into battle against a younger, hungrier, more focused, and perhaps (just perhaps) even faster gun like Leclerc with the wind already in his sails after just a single season at Ferrari.

No. Bottas is the perfect teammate-type for Hamilton.

There are 20 drivers on the grid, but all of them can actually be put into a mere few categories. Grosjean, for one, and the now-departed Hulkenberg, are examples of the journeyman driver type. Stroll and Maldonado paid. Bottas and Barrichello are lieutenants.

Riccardo is a nearlyman. Ocon and Russell are untapped vessels of potential. But Hamilton and Leclerc are truly GREAT.

In the opening, hype-filled months of a then 22-year-old Hamilton’s career, I remember writing that Lewis had a long road to greatness ahead of him.

I wasn’t confident that he would one day join Senna, Schumacher and Fangio in that pantheon of F1 heroes we all worship, and given that he threw away a 2007 title that was in the bag and oh-so-nearly fluffed his first championship a year later, who could blame me?

But, as I’ve said already in this piece and will repeat, there is absolutely no doubt that Hamilton is an all-time great who will deserve it if he matches Michael Schumacher’s seven titles in 2020 and wins a record eighth in 2021.

But I don’t think he will. I think the Charles and Max era is clearly dawning.

So while Leclerc is an obvious great-in-the-making, having already booked a spot in the all-time list above the four-time world champion he stole number 1 status from at Ferrari in the opening salvo, Verstappen’s driver-type deserves its own category.

Max is not merely a great driver. The kid is a freaking killer.

It’s not just his fuel-reeking genes, supplied by world-class kart driver Sophie Kumpen and a man who thoroughly deserves his nickname ‘The Boss’. It’s not just that Jos – a former Michael Schumacher teammate – regularly beats people up (including, allegedly, Max’s now-deceased grandfather).

It’s not just Max’s stories about being punched in the chest by his dad, given the silent treatment for seven days, or dumped at the side of the road in a foreign country on the way back from a kart race.

It’s fact that with it all added together and everything we know already about this incredible talent and personality, we’re not actually sure what will emerge on a given Sunday, either victory at the chequered flag, a remarkable fightback or a deliberate punt into the gravel. All or nothing Senna-style.

And so, hat’s off to Ferrari and Red Bull, for throwing large suitcases of cash at this pair of youngsters, who are currently – Hamilton included – the only superstars of the 2021 season.

It means Lewis has nowhere else to go and he may even have to take a cut to what is currently F1’s highest pay-packet, which is a clear sign that, as ever, there is no stopping the steady marching forwards of the future.

And as we speak, the future is so obviously Charles and Max.