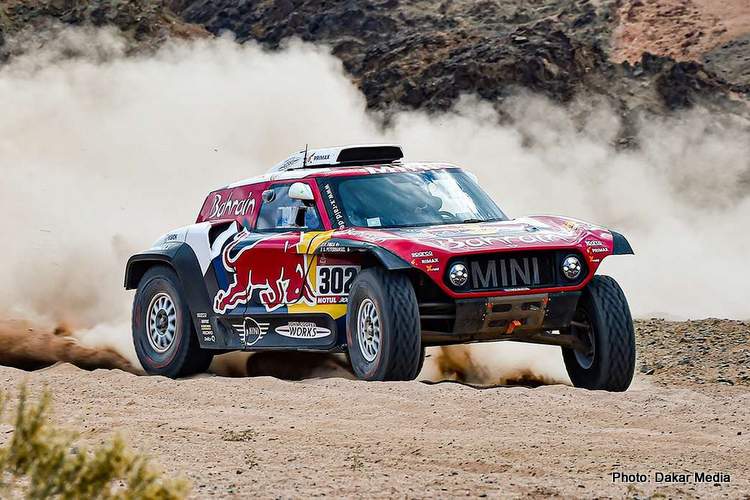 Day 4 of the Dakar Rally, Wednesday’s 453km stage from Neom to Al-Ula, in Saudi Arabia, was a busy one for the cars and packed with heroics on a drama-filled day for bikes, while double Formula 1 world champion Fernando Alonso has climbed back into the top twenty.

On day two, Dakar rookie Alonso had long delays when he broke a wheel and as a result, dropped down to 53rd due to the incident but has since then made steady progress, ending the stage 13th, and now lies 20th in the standings two hours and 50 minutes behind the overall leader who is fellow Spaniard and friend Carlos Sainz Snr. in the Mini.

Alonso Tweeted at the end of the day:

Frenchman Stephane Peterhansel, known as Mr.Dakar for his 13 wins over the years, overcame the challenges of taking English instructions from Portuguese notes man Paulo Fiuza and a tough couple of days in the office, to move his Mini buggy into the lead midway through the day’s stage.

The rally legend emerged unscathed from the dangerous fourth stage, conceding a mere seven minutes to stage winner Peterhansel despite having to open the special. The Spaniard still leads the general classification by three minutes over Al-Attiyah.

Peterhansel reflected afterwards, “It feels good after all that trouble in the first few days, even though we had a flat tyre and got lost once. It wasn’t a flawless special, but it feels great to take the win. Leading the charge was hard and Carlos lost some time, but he did an amazing job because it didn’t take him long to get back on track. He might be the MVP today. There were more stones than expected and the final…”

Local Saudi hero Yazeed Al Rajhi (Hilux) ended fourth on the day ahead of Frenchman Mattieu Serradori, who had run in the top ten for most of the day en route to fifth in his SA-built Century-Corvette buggy and Giniel de Villiers, who bounced back to sixth ahead of Dutch Gazoo Racing Toyota teammate Bernhard Ten Brinke.

Sainz said of his day, “The last 100 kilometres were the toughest sector I’ve ever faced in the Dakar. It was insane. There were rocks all over the place and I could not see the tracks, it was devilish. At times like these, making it to the finish without running into trouble already feels like a win.”

Most people never knew who Ross Branch was before Monday afternoon, but that all changed when Botswana’s multiple South African cross country champion rode his KTM to a shock Dakar Saudi Arabia second day victory. Branch’s glory was short lived as the Kalahari Ferrari took a tumble, separating his shoulder, severing the tip of a finger and damaging his KTM enough to destroy its navigation tower, among the damage.

Undeterred, Ross got up with the help of rival Pablo Quintanilla who stopped to help, dusted himself off and rode his buckled machine the 350km home to the finish. Most would have written Branch off by then, but he’s a tough cookie and lined up 46th on Wednesday morning, claiming that he would ‘ease into it’.

Branch was however 26th by the first waypoint, 21st at the second, 14th and then seventh at the final timing point, before storming into the finish in an incredible third in what can only be described as a superhuman effort.

Sunderland, Price, Brabec and Benavides all took chances to lead the way. Overall, Brabec leads Benavides and Florimo in a Honda bike 1-2-3 ahead of KTM men Price and Sunderland and Chilean Quintanilla (Husqvarna), while Branch moved up a few places to 18th.

Dakar moves into its fifth day sees crews taking in the sandy hills from Al’Ula to Ha’il on Thursday 9 January.

Your daily Dakar Report is brought to you by Motorsport Media courtesy of TreasuryOne Motorsport and Red-Lined Motoring Adventures.