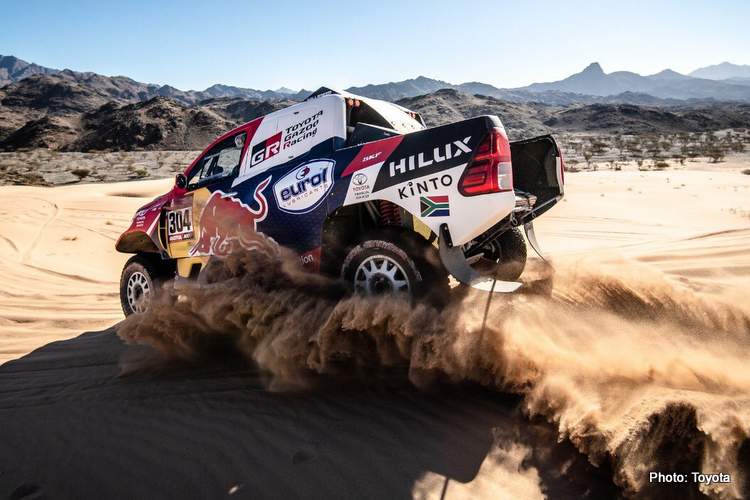 After a solid opening day, Fernando Alonso had a frustrating second day losing well over two hours when he broke a wheel on his Gazoo Racing Toyota during the second stage of the Dakar Rally in Saudi Arabia.

The incident dropped the Spaniard down the order, from 11th at flag-off and 53rd by the time he arrived at the end of the stage.

The double Formula 1 World Champion was forced to wait for his assistance team after breaking a wheel, losing two and a half hours in the process, dealing a major blow to his hopes of a top ten finish in his debut.

“Yeah that’ll do the trick”

At the sharp end, Toyota Gazoo Racing’s Giniel De Villiers enjoyed a steady day after his tough four-puncture first stage to move up from his fourteenth starting spot to fifth by the first waypoint and then second behind Saudi home hero Yazeed al Rajhi’s similar SA-built Toyota by the end of the fourth sector.

Drama in the Cars

It was another dramatic day as the rest of the car top ten ebbed and flowed behind the consistent de Villiers and flying Al Rajhi, who had taken complete advantage of his home knowledge to lead the way and open up a significant stage lead through day 2, while his rivals preserved their tyres as they learned the way. Al Qassimi led the early chase before he hit trouble to allow reigning champion Nasser Al Attiyah to take up the chase, but he too ran into problems to see de Villiers into second ahead of Russian Vladimir Vassiliev’s Mini, which also later suffered problems.

Behind them Mini men, overnight leader Vaidotas Zala, Mr Dakar Stéphane Peterhansel and double winner Carlos Sainz, Al-Attiyah and Toyota teammate Bernhard Ten Brinke all suffered significant delays to punctures, navigation and other drama, while Dakar debutant, double world F1 champion Alonso (as reported above) was delayed for two hours in the desert with suspension damage on his Toyota.

In quad action, former winners Ignacio Casale and Rafael Sonik fought it out for the win with Sonik taking the day in the end, while Bulgarian Vladimir Viazovic (MAZ) took the truck win from Kamaz trio Dimitri Sotnikov, Andrey Karginov, and Anton Shibalov.

2018 Dakar Rookie of the Year – Botswana motorcycle hero and multiple South African Cross Country champion – Ross Branch put in a mesmerising performance to run second behind Honda rider Joan Barreda, before moving his KTM into the lead of the motorcycle race at the day’s third waypoint.

Quite astoundingly, winner Branch was the only privateer among a factory rider-dominated top 15 motorcycles as KTM’s Sam Sunderland disposed of Husqvarna rider Pablo Quintanilla for third ahead of Argentine brothers Kevin (Honda) and Luciano Benavides (KTM) and Joan Barreda (Honda). Sunderland now leads the bikes from Quintanilla and Kevin Benavides with Branch sixth. (Additional Reporting by GP247)