Rossi: In 2006 I very nearly switched from MotoGP to F1 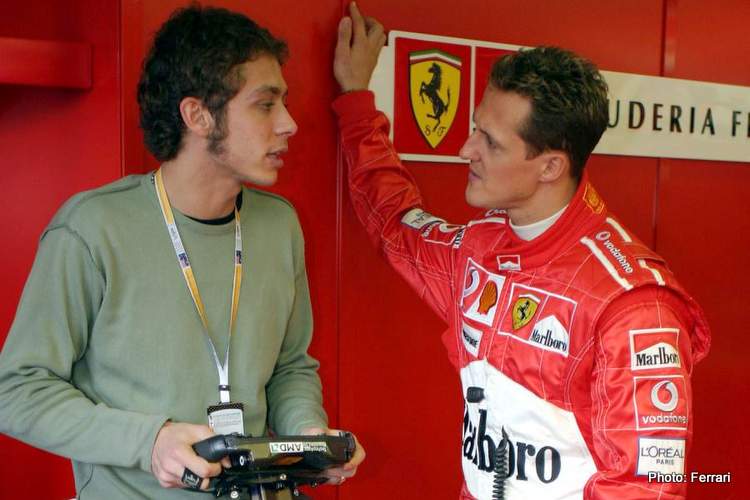 In the wake of his recent Formula 1 test with Mercedes, Valentino Rossi has revealed how close he came to becoming a Ferrari driver when he flirted with a swap from two-wheels to four-wheels at the peak of his powers in MotoGP.

That was in 2006, fast forward nearly 15 years and Rossi again had a taste of F1 when he drove the 2017 F1 title-winning Mercedes W08 at Valencia in December.

Of his experience in Lewis hamilton’s title-winning Merc, the 40-year-old said, “I also feel that today’s cars are better than F1 cars of the period around 2006. I had more fun also because, physically, I had fewer neck problems. Mercedes has an impressive engine, the turbo is crazy. And the monstrous grip, with those huge rubber tyres.”

The seven-time MotoGP Champion also explained that the day with Mercedes was a proper test and not just a publicity stunt, “When the idea came up I said to myself ‘beautiful, how cool’. But in these cases you always risk an incident, so you do 20 laps and then four hours of photos or something.

Rossi went on to reveal how serious his romance with F1 was when he tested for Ferrari, “In 2006 I was very close to making a switch to Formula 1.

“I had completed a number of tests for Ferrari and afterwards we sat down with the team management who had devised a very comprehensive plan to prepare me for a career in Formula 1. However, that plan stated that I first had to drive a less fast car first to prepare and initially I was supposed to be a test driver, which is why I decided to decline the offer.”

Rossi went on to win two more MotoGP titles and cement himself as one of the greatest riders of all time, not only statistically but also off track for the charisma and passion he brought to the sport.

Luigi Mazzola, a Ferrari engineer at the time recalled, “I don’t remember exactly how many tests we did with Valentino, at least seven of them.

“In the first test, he spun out about a dozen times but over time, that day, he drove really amazing lap times. I remember it well when I looked at the data with Michael Schumacher in the pits. Schumi had an astonished expression on his face, almost incredulous,” added Mazzola.