Alonso: Why am I here? Good question! 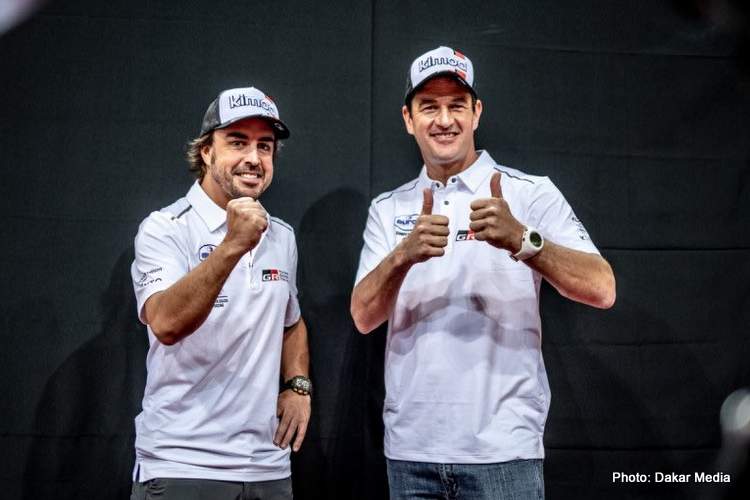 The Dakar Rally is known as the toughest event in motorsport, thus no surprise double Formula 1 World Champion Fernando Alonso admits he is a little mad to be tackling the legendary event in the Saudi desert.

After all he – with some testing and a couple of competitive off-road races on his CV – is taking on the best off-road drivers on the planet including fellow Spanish legend Carlos Sainz (of the senior variety) who predicts that the ‘rookie’ could surprise.

In the Toyota Gazoo Racing camp, Alonso is with one of the best off-road outfits in the business, packed with experience and expertise, including defending champion and local legend Nasser Al-Attiyah.

Ahead of today’s start of the Dakar Rally, being held in Saudi Arabia for the first time, reporters asked Alonso why he made the decision to tackle the mighty event which is so far from his comfort zone of track racing.

“Why am I here? Good question!” he replied. “I’m a bit crazy to think of going from the asphalt to the toughest rally there is. But I love challenges and the Dakar is perfect for me. I am in a very strong team, between Nasser Al Attiyah, Giniel De Villiers and Yazeed Al Rajhi, my role, especially at the beginning, will be to learn.

“I am more than aware that I am missing experience and probably also speed, but I want to surprise. It’s a little madness and I really want to live it but I am a realist, everyone has limits. However, I will tackle everything with the utmost seriousness and concentration because there is no room for error.”

Alonso’s presence at the Dakar will attract larger than normal global media interest as he remains a true superstar of the sport despite quitting the top flight a couple of years ago, to focus on alternative disciplines while targeting the Triple Crown of Motorsport. Victory at the Indy 500 still eludes him.

However after a few tests, over the past year, with Toyota Gazoo Racing the Alonso-Dakar project became a dream that has now turned into reality and by the Spaniard’s own admission  “the biggest challenge of my career” is now underway.

The publicity that has followed is sure to capture the interest of legions of fans who still believe the Spaniard is the best F1 driver of this generation, while F1 fans – most of which hold Alonso with high respect – are likely to be intrigued by his progress amid the huge hype.

The 38-year-old added, “My life has always been like this, whatever I do I have the eyes of the world on me, be it F1 or karting, or rally. But, people will understand that in this discipline there are great drivers and despite all that I have done it is impossible to reach their level in six months.”

While the ‘marketing value’ of having Alonso in Saudi on the start line of the first race of this new era for the Dakar, for him it is much more than that.

The former Renault, McLaren and Ferrari driver explained, “I say that I have very big balls. I would certainly be more confident and have more fun in other disciplines where I would know what to expect. This instead is a totally new thing, it is not a marketing show where you go on a circuit and change between motorbikes and cars.

“Here we are competing against the best in the world. It is already difficult to imagine a circuit driver who goes to the Dakar as a first experience and even more difficult is to make it a reality.”

Alonso tackles his first Dakar with seasoned veteran Marc Coma who is coaching the two time F1 Wolrd Champion who says of his illustrious co-driver, “I am the one who calms him down, he is ultra-competitive, every time we are at the start of a special stage, you see the adrenaline going up and you understand why he is a legend. I am super happy to drive with him.”

For a man used to winning at just about every level he has raced in, his expectations ahead of the mightiest off-road raid are remarkably modest, “I’m here to have fun. If anything else comes along then we’ll talk about it.”

Two-time Dakar winner and rally legend, Sainz, was asked what advice he had for Alonso. He ventured, “Above all to have respect for this race and to try and go as far as possible. If he does that all right, he can think of a top-five or six finish.”