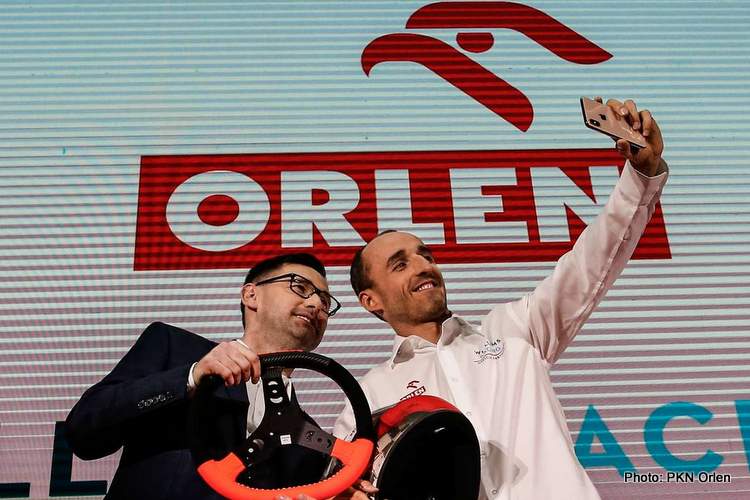 Robert Kubica will remain on the fringes of Formula 1 thanks to a deal which sees his backers PKN Orlen become title sponsor of the Alfa Romeo in 2020, the Swiss team confirmed today.

RMF24 repored first that Kubica will be the Swiss team’s reserve driver with veteran Kimi Raikkonen and Italian youngster Antonio Giovinazzi in the driving seats. PKN Orlen branding will be prominently displayed on the car as well as team wear and overalls, with their eagle logo on the rear and front wings, halo rims, mirrors and on the side sections of the car.

The partnership will be known as Alfa Romeo Racing Orlen team, with Kubica a test and development driver. The confirmation marks a return to Hinwil for the Pole who was once part of the BMW-Sauber operation a decade ago for whom he won his one and only Grand Prix.

As part of the cooperation between the company and the team, both entities will promote youth development, as part of the Orlen Karting Academy, run by Sauber Motorsport. Three young drivers from Poland will be selected for the programme.

In this way, Orlen – which is a strategic sponsor of Polish karting series – intends to identify and groom successors to Kubica. About 200 drivers will compete in the upcoming season, including 30 young drivers nominated for the Orlen Team Academy.

Kubica, who endured a disappointing comeback season with Williams last year, has designs on DTM in 2020 and tested for BMW in December. News regarding this is expected soon.

After the heartache and disappointment of the Williams debacle, Kubica is well placed to return to the grid should Raikkonen or Giovinazzi be unable to do so as the veteran, should he want to, could quit any time during the course of the season.

While Giovinazzi needs to up his game, of not a slew of bad results could count against him and provide Kubica the opportunity to step up. In other words, of all the reserves, the third guy at Alfa Romeo probably has the best chance of a substitute drive this coming season.

Hinwil, 1st January 2020 – Alfa Romeo Racing is pleased to announce that PKN Orlen will join the team as Official Co-Title Sponsor starting from the 2020 season thanks to a multi-year major partnership.

The Polish petroleum giant, a company with an extensive presence in its home country, Germany, Czech Republic, Slovakia, Lithuania and Canada, will assume co-title sponsor rights at Alfa Romeo Racing, which will now compete as Alfa Romeo Racing Orlen. PKN Orlen branding will feature on the team’s C39 car and on all team trackside assets, with an exciting programme of fan engagement – to be announced ahead of the 2020 season – as a key element of this partnership.

The partnership will also see Robert Kubica return to the team that gave him his Formula One debut and first win as he joins Alfa Romeo Racing Orlen in a reserve driver role for the 2020 season.

With the continued support of Alfa Romeo, which since 2018 has been instrumental to the team’s rise, the new partnership will empower Alfa Romeo Racing Orlen to make the next crucial step forward on the Formula One grid in the 2020 season and beyond.

Robert Kubica, reserve driver Alfa Romeo Racing Orlen: “I am really happy to be starting this new chapter in my career as I join Alfa Romeo Racing Orlen. This team holds a special place in my heart and I am pleased to see some faces still here from my years in Hinwil. Time and circumstances are obviously different, but I am convinced that I will find the same determination and hunger to succeed. I am looking forward to helping Alfa Romeo Racing Orlen make the next step forward.”

Frédéric Vasseur, Team Principal Alfa Romeo Racing and CEO Sauber Motorsport AG: “The exciting new partnership with PKN Orlen is a statement of intent for both parties. It is proof of the ambition of our common project and of our desire to compete at the very top of Formula One. PKN Orlen support for excellence finds a perfect partner in our team.

“We are also delighted to welcome Robert back home and we cannot wait to start working with him. He is a driver that needs no introduction: one of the most brilliant in his generation and one who displayed the true meaning of human determination in his fight to return to racing after his rallying accident. His feedback will be invaluable as we continue to push our team towards the front of the grid.

“The partnership between PKN Orlen and Alfa Romeo Racing, together with the remarkable and never-ending support of Alfa Romeo, means we can create a valuable platform not only for the global promotion of our brands but also for Formula One and all automotive fans. We are looking forward to years of success together.”

Daniel Obajtek, CEO and President of the PKN Orlen Management Board: “In sport as in business, consistency is crucial. When last year we supported the return of Robert Kubica to Formula 1, we knew that we were creating the history of sport, but we were also opening a new chapter in the history of Orlen brand. Last season has exceeded our expectations in the context of the benefits obtained through the presence in the most prestigious races in the world. The sheer value of our logo after 16 races exceeded 110 million PLN.

“We also significantly increased the profits of the retail network. Building global brand recognition has also allowed us to start the co-branding process, under which all European stations of our network will ultimately operate under one brand. Today we are taking another important step on this path by associating ourselves with a team that has enormous tradition and history. Robert Kubica, one of the fastest drivers in the world, remains our ambassador.”