Verstappen: There’s no limit, Honda will do everything for you 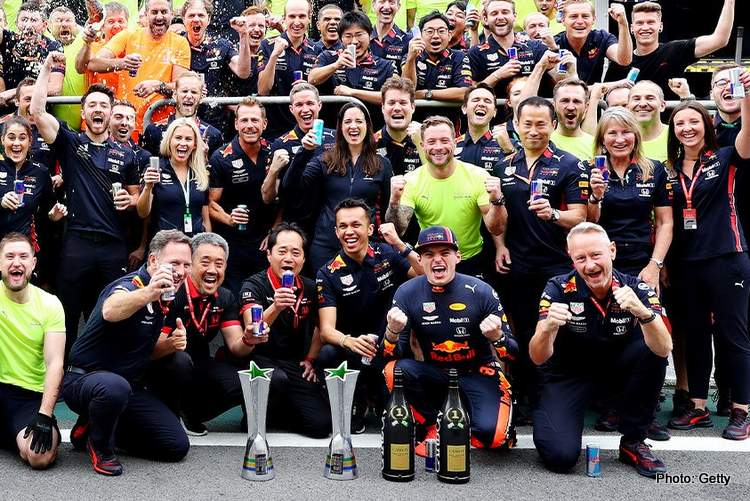 Max Verstappen confirmed his status as one of the top three drivers in Formula 1 with third place in the 2019 World Championship, leading the new Red Bull and Honda partnership to victory on three occasions in his best season to date at the pinnacle of the sport.

Typically Red Bull started the season sluggishly, the Dutchman on the podium only twice in the first eight races, but thereafter he scored a further seven visits which included three on the top step.

However, now that the dust has settled, it would be fair to say that Verstappen lacked firepower to be a title contender this past season despite huge strides made by Honda since their ill-fated McLaren misadventure.

Looking back on the season past, in an interview on his team’s website, Verstappen reflected, “It’s been good, but it could’ve been better.

“The start of the year was a bit tricky for us because we couldn’t fight at the top, but we always maximised the results and then we started to really kick on. We had some crazy fun and good races. This saw a rise in confidence across the entire team and was a massive boost for everyone.”

Red Bull’s preseason testing programme was severely impacted when ‘new boy’ Pierre Galy pranged the team’s test car, thus they arrived in Melbourne on the back foot, and not for the first time for the Blues.

Verstappen continued, “The new wing took a bit of time to work out, but then over the course of the season we got used to it. Throughout the season we have improved both the car and engine and I’m very pleased with that, because at the end of the day if you want to fight for a world championship, you can’t retire.

“We took five engine changes, but they were for upgrades, not for an engine being worn out, which is a good thing,” explained the 22-year-old.

In what could be a Hollywood script, Verstappen delivered Honda’s first victory in the top flight since 2006, but more importantly, Red Bull’s gamble to partner the Japanese auto giant paid off with a major shot in the arm for the programme which victory on home soil certainly was.

After all, Red Bull Ring is a labour of love for billionaire owner Dietrich Mateschitz, thus many boxes were ticked that afternoon in the Styrian hills.

No surprise it was also one of the driver’s highlight, “Of course, it was the wins in Austria and Germany – which was just a crazy and hectic race – but Austria, was perfect, it couldn’t have gone better.

“It’s not an easy place to overtake, but it was great to win at Red Bull’s home track, it was the first win for Honda in the V6 era, and there were a lot of Dutch fans there, it was perfect! It was a massive boost for everyone.

“As a person, you always grow, you become a better driver throughout the years and learn a lot. Not only in driving but in life, so I can say this has been my best season,” he added.

Last season, early in the year Verstappen went through a wayward patch but found his form and has gotten stronger with just about every outing, “There weren’t lows, there were just unlucky moments. Overall, it’s been positive and everyone is very excited about next year.

“After the summer break we had some unlucky runs, but we started to pick it up again. We always kept believing and pushing hard as a team. We always seem to make the right decisions when we’re under pressure, which is a big bonus.”

Of course, all eyes at the start of the season were on their new engine partnership, and Verstappen makes no bones about what he sought at the time, “What was important to me was that we had a reliable engine – something we’ve struggled with in the past – and we didn’t retire once because of a Honda issue.

“That’s something we need if we want to fight for the World Championship. I am really impressed with how Honda work. There is no limit, they will do everything for you. There’s a lot of potential there.

“Throughout this year every goal they set, or everything they promised, they delivered and more. That’s what you want to see, so I’m very happy we’re continuing the partnership and I hope we can go even further next year.”

“This season was very positive, the consistency was overall good and we ended the season strong. We maximised the results at the start of the season even when we weren’t winning, but our strategy was good and if we keep that up next year it will be an exciting season.

“Mercedes is the dominant team and we are still behind because there are a few things missing from the car. I think we can also find more performance in the engine, but everybody wants to improve, and I’m the same. We don’t want to be on the same level as them, we want to be ahead of them.”

While Verstappen and his minders have let all and sundry know of his availability when his contract runs out with the Bulls at the end of next year, if his team can deliver a title-challenging package he might have no reason to seek alternative employment

“We all want to win,” he insisted of Red Bull and Honda. “We have the winners’ mentality in this team and we want to get back to those days of [2010 to 2013] dominance. We want to win more races, which hopefully means we’ll be fighting for the title!”

As for the off-season, being Verstappen it is more racing!

“I’ll be doing a lot of sim racing and try to compete in some championships next year as well,” revealed the Red Bull driver. “I race under my own name, so some people I compete against are harder on me and others are nicer. It’s great.

“I was on the sim after Brazil and some people wrote me messages in the chat, saying well done and that it was cool to be racing with me online – it’s nice, I find it very relaxing, you have your headphones on and are chatting to friends online, not always about racing!”