Binotto: Leclerc has been outstanding in his leadership 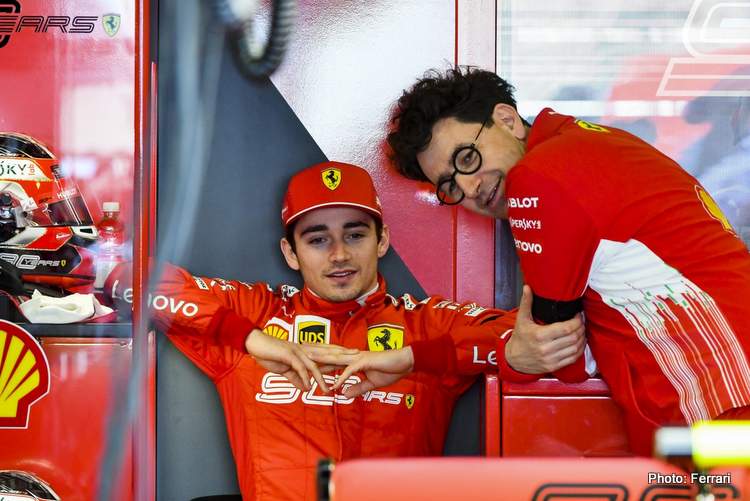 Ferrari team boss Mattia Binotto was refreshingly candid when talking about the team he has led for the first time this season, a campaign that promised much before it got started was blown out the water by Mercedes who humbled if not humiliated the Italian team in 2019.

Binotto spoke at length during the traditional end-of-season media lunch and has been quoted at length since that day at Maranello, with F1 website releasing team principal’s post-mortem on a season that left the tifosi legions yet again disappointed.

After arriving in Melbourne with tails high, after an impressive preseason of testing, and then getting trounced by Mercedes was a blow for the Scuderia, Binotto recalled, “It was a cold shower in Australia, there were good reasons for not having great performance, we made a bad choice in terms of cooling and on power unit management.’

It got worse as Mercedes stuck in the knife winning eight races in a row, with Lewis Hamilton making himself champion elect by winning eight of the first twelve races before the summer break. Thereafter Ferrari found an eye-raising sweetspot after the summer break which triggered allegations of cheating, led by accusers in chief Red Bull and motormouth Max Verstappen.

Binotto took up the matter, “We have never changed our way of operating the engine for the last part of the season showing that somehow our power unit has full legality, otherwise had that not been the case, if there would have been any non-legality, it would have come out at the very first check.”

Ferrari’s biggest problem is the fact that under Toto Wolff and spearheaded by Hamilton while ably backed by Bottas, Mercedes are as close to perfection as a team has ever been, the twelve titles in six years proof of that.

In contrast, a slew of mistakes by the Ferrari drivers compounded the problems and pressure while their arch-rivals delivered impeccably on all fronts. In contrast, the Reds were all over the place this season, even when they had the better package, with strategy gaffes and pitstop fumbles adding to the casino.

Binotto acknowledged, “Pit stops were also not good enough. On many occasions, ours were over six seconds, which is not acceptable for a Ferrari team. And when you have to be perfect to win, you need to be perfect as well from a team point of view and mechanics and pit stops.

“It’s not a matter of skills. It’s not a matter of individuals. After all, the way we are approaching the problems is through practice. It’s through a lot of training. A lot of analysis, a lot of tools. It’s a lot of methodologies showing that we need to improve ourselves 360 degrees. And that’s the challenge we are facing for the next year.”

The other challenge will be managing his feuding drivers, Sebastian Vettel and Charles Leclerc. Binotto has been keen to play down the rivalry between the pair which hit a nadir when they collided in Brazil, but there is no way to hide the reality that the Young Gun rattled the Old Guard.

Their boss gave his take on “under a lot of pressure” Vettel’s well-documented woes this past season, “He has been uncomfortable with the car at the start of the season, certainly with the braking instability. The challenge for him has been a good benchmark as well because having such a fast teammate gave him some headache. He reacted very well in the second half.

There is no doubt that the Leclerc story is a feel-good one for the Reds. Finally, they have a homegrown (through the FDA programme) talent who is not only fast, he is also young and with the heart of a Ferrari stallion.

He is their future, or at least that is what the tifosi are hoping for from the likeable 22-year-old Monegasque, Binotto said of the young charge’s first year in Red, “His season has been outstanding for what he achieved in the first year. We should not only look at the speed on track but the way he’s interacting with the engineers, his leadership of the team.”

Thus the Ferrari chief has laid bare the challenges he faced last year heading the world’s most famous team in a refreshing manner, seldom if ever seen from a Scuderia team principal, which sheds light on what has to be done at Maranello to overthrow the might of Mercedes in years to come.