Hamilton: 2019 is the best year I’ve ever had in my career 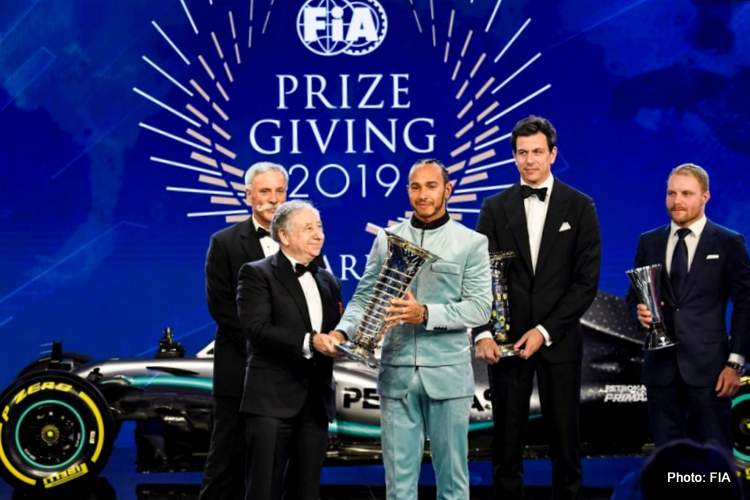 The winners of this season’s FIA-sanctioned motorsport competitions have been crowned at the glittering 2019 FIA Prize Giving ceremony at the Carrousel du Louvre in Paris.

The undoubted highlight of the evening was the presentation for Lewis Hamilton, who took the iconic trophy for his sixth Formula 1 World Championship title.

This puts him just one crown shy of Michael Schumacher’s record of seven F1 World Championships.

The 2019 season was a display of supremacy by the British driver, who equalled his 2018 achievement of 11 grand prix victories. Furthermore, Hamilton accumulated a record tally of 413 points in a season, something that has never been achieved before.

The six-time champion said, “It’s been the best year I’ve ever had in my career. I’m really proud of what we’ve achieved as a team. To come into a sixth year, to have fought for a world title at the front and sustained the performance we have collectively I think has been amazing.

“And on the driver front, I’m definitely very happy with my performance this year. There’s been lots of great races, the last few years have been intense with Ferrari, but having another team up there in the loop has made it more challenging for all us.”

Hamilton’s contribution allowed the Mercedes team to secure its sixth consecutive Manufacturer’s Title, another feat that has never before been achieved.

Also on the night, the Rookie of the Year prize, voted for by members of the FIA Drivers’ Commission, was awarded tp F1 driver Alexander Albon, who started the season with Scuderia Toro Rosso before impressing on his promotion to Red Bull Racing. The Thai finished eighth in the drivers’ standings in his debut season, following an impressive performance at almost every race.

The Personality of the Year award, voted for by permanently accredited media from the FIA’s major championship, was awarded posthumously to Niki Lauda, the three-time F1 world champion and executive director of the Mercedes F1 team.

The Action of the Year prize, voted for by fans of motorsport via the FIA’s online channels, was presented to F1 start Max Verstappen, who was honoured for his spectacular battle with Charles Leclerc during the British Grand Prix at Silverstone. The pair raced wheel to wheel, with Leclerc edging Verstappen wide before the Dutch racer came back at him and overtook on the following corner.