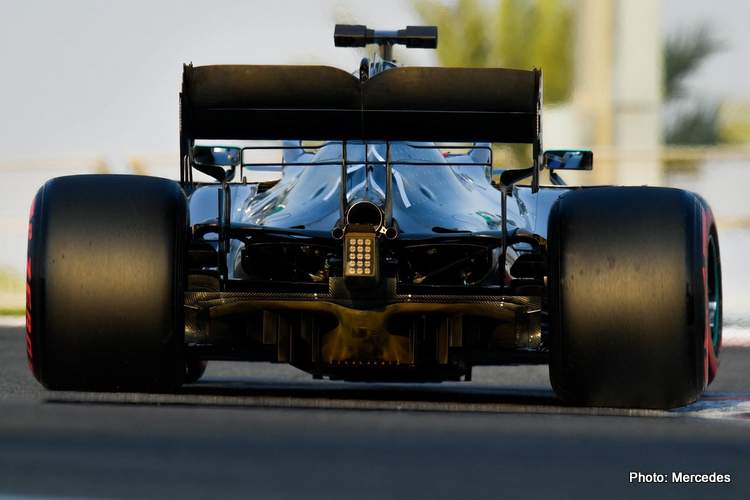 Valtteri Bottas topped the time screens at the end of the first day of Pirelli tyre testing at Yas Marina Circuit, in Abu Dhabi, on a day in which Esteban Ocon returned from his year sabbatical to clock laps for his new team, Renault.

Teams were sampling the 2020 rubber that Pirelli have concocted which were not much appreciated when they broke cover during practice for the United States Grand Prix at COTA.

Bottas, who powered from the back-of-the-grid to fourth place at Sunday’s Abu Dhabi Grand Prix, clocked the fastest time of the day with his effort of 1:37.124 on lap 129, using the C4 tyres during his 138 lap stint on Tuesday.

Ferrari driver Sebastian Vettel was second fastest using the C5-spec tyre on a day in which relative times meant very little as programmes differed up and down the pitlane.

The German, who has had a torrid season was involved in another incident, this time the Ferrari driver turned into the path of Sergio Perez in Turn 11, the Racing Point’s front wheel rubbed against that of the Ferrari’s rear, sending the red car into a spin.

Both drivers continued, damage insignificant, with Vettel spending much of the morning top of the timing screens until Bottas’ late run toppled him off the top. Perez was fourth fastest.

Sean Gelael and Daniil Kvyat shared duties for Toro Rosso, the Formula 2 driver ending 11th during his morning stint. The Russian was third fastest during his 72 laps he completed in the afternoon. The pair combined to amass 139 laps.

Drivers who did over 100-laps during the course of the day were Haas driver Romain Grosjean in fifth followed by McLaren’s Lando Norris sixth and Red Bull’s Max Verstappen seventh fastest.

Next up, in the Renault, was Esteban Ocon making his long-awaited return to action after a year on the sidelines. The Frenchman was dialling himself into his new surroundings and unfamiliar car. he only managed 77 laps on day one but will be back in action on day two.

George Russell had a final run in the Williams as he completed 87 laps during the morning stanza in which he was ninth quickest, before handing over to Israeli little known Roy Nissany who reportedly paid for the privilege of testing for the once might team reduced to perennial backmarkers.

The 25-year-old newcomer was 4.3 seconds slower than the Williams rookie was a few hours earlier in the same car; granted they were on different tyre compounds.

Nissany will have another stint on day two while Russell will be in duty for Mercedes on Wednesday. 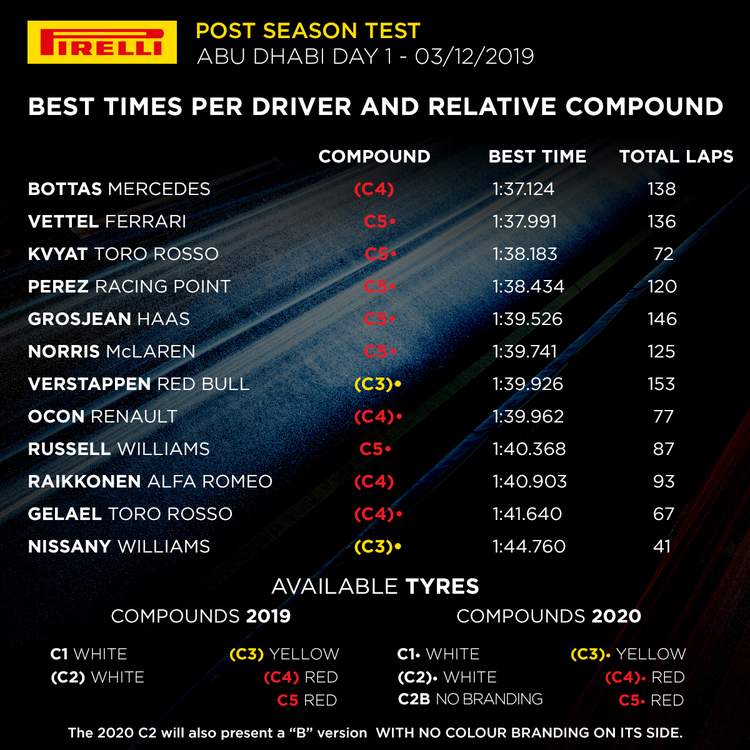