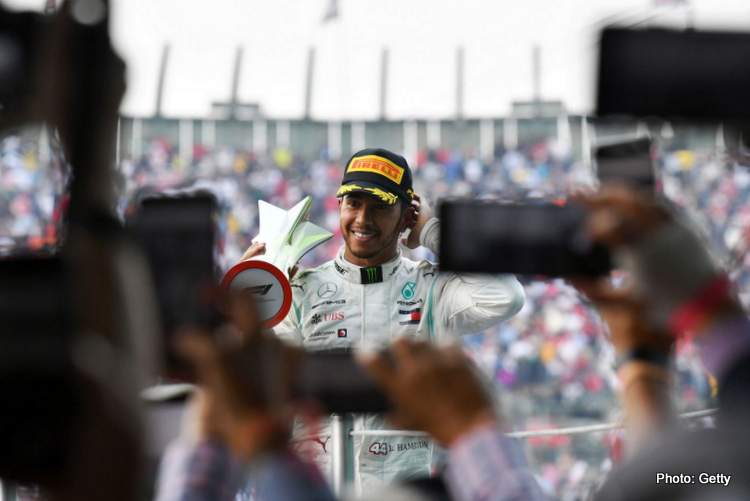 Question: Who is the most important person in Formula 1?

What? Aren’t drivers just overly-priced plug-and-play boys being told what to do with their 58 steering wheel buttons by geeks on a pitwall? Well, they are that too, but it’s important to remember that Formula 1 – while increasingly reliant on the technology – is at its core just the product of human beings who are able to excel in ways their peers cannot.

In that sense, Mr Hamilton is an extremely powerful human being in Formula 1. He’s also a formidable commodity.

Carey, the aforementioned F1 CEO, said in Abu Dhabi that he hopes the new six-time world champion races “forever”, and that’s pretty much more understandable than any other understandable concept ever uttered in the history of everything. No driver, perhaps in the entire glittering history of this sport we all know and love, has created a brand quite as powerful as Hamilton’s.

Did he do it deliberately? Certainly, if you were to walk into a sports bar in the United Kingdom and scream at the top of your lungs “I love Lewis Hamilton!”, you would at the very least create one hell of an interesting conversation.

Try it with Lance Stroll or Antonio Giovinazzi, or even genuinely exciting drivers with actual star power like Charles Leclerc or Max Verstappen. You’ll create conversations, for sure, but it’s hard to imagine any of them ending in fisticuffs. But Hamilton? I’m not so sure!

And for mainstream bums on grandstand seats and millions of worldwide eyes on screens, whether they love him or they can’t stand his gold chains, veganism and cringeworthy showmanship, what you need is those hoarse voices in pubs.

If Hamilton did create that brand deliberately, he’s done a brilliant job and definitely won’t need to consider the prospect of eating cat food in his 80s.

So it’s in that context that the Hamilton-to-Ferrari rumour – which not only sparked up in Abu Dhabi but went off like a petrol-soaked firecracker – is so god damn fascinating.

Real rumours tend to make people shuffle uncomfortably in their seats. I’m a big fan of analysing body language, and the body language from everyone involved in the Hamilton-to-Ferrari media fest so far has been … weird.

How did the rumour start? Without getting too forensic, my take is that it was actually started by … kinda everybody. And why the hell would that be?

Until now, whenever the F-word is brought to his attention by the media, Lewis’ answer has been impeccable. Something along the lines of: “I’ve been a Mercedes driver for 800 years, I love this team, who knows what the future might bring, blardy-blardy-blah, I’m more interested in winning and earning a squillion dollars a second and posing for GQ magazine with ‘ma tats and ma doggies’ than I am in driving a car just because it’s coloured red.”

As I said: impeccable.

Mattia Binotto said out of the blue that he is “happy” that Hamilton is available for 2021. Hmm. Then Hamilton said he enjoyed the rare compliment. Double hmm. Then Toto said something to the basic effect of “Pffft. We can live without Lewis”.

O….k. Then Italian journalists were reporting that Hamilton actually met – twice! – with Ferrari chairman John Elkann. WTF. Then rumours that Wolff might not be replacing Carey but actually switching to Ferrari in the future emerged. This is getting weird!

Now, after almost two decades of immersing myself in Formula 1 news and rumours, I’ve seen plenty of them before. But, so far, this one just needs a big red bow around it to make it even more like a movie script than it already is. It doesn’t smell fishy so much as it sounds a little too … Netflix.

A couple of days ago, Christian Horner – the boss of a top team but someone who is less likely than many others to be involved in grand, complex sub-plots at the Ferrari/Mercedes/Liberty level – wondered why on earth the top teams would be looking to shuffle up their drivers for 2021.

I mean, we have Verstappen in Car A, Leclerc in Car B, and Hamilton in Car C. From a purely sporting perspective, that sounds perfect to him, and it sounds pretty frickin’ perfect to me too.

So what on earth is going on with this Hamilton-to-Ferrari palaver?

The Briton, who would be 36 by the time he gets to Maranello, conceivably might fancy beating Michael Schumacher’s last remaining records in the same-coloured car. And Toto might be playing a sneaky little game of pre-negotiations along the lines of: “We’ve made you richer than Midas, sonny Jim, so don’t you dare try asking us for more!”

Or have Carey and his digital media team started salivating at the amount of global adrenaline (and F1 TV subscriptions) they could whip up with those first images of Hamilton in a bright red suit?

I honestly don’t know. I’m just telling you my scattered thoughts. But as I said, I’ve seen thousands of rumours in my time, and this one looks a liiiiiittle bit Hollywood to me.

Penny for your own thoughts.