#TheXtraLap: Signing off the season with a €50000 fine 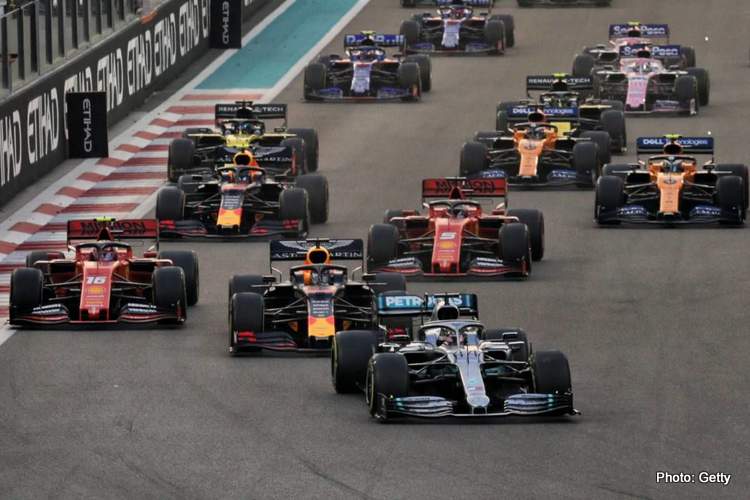 Everyone thought it was going to be a boring Abu Dhabi Grand Prix, as was so often proven in the past, after all there was not much at stake anyway but we were all pleasantly surprised, partly because during the first 18 laps, the DRS didn’t work because a server error caused the timing transponders to malfunction.

This also meant that overtaking had to be done the old-fashioned way and not artificially. Because of this there might have been less overtaking actions, but the ones that were there were also pure driver actions and nice to see.

When the race was over, Max Verstappen had strengthened himself in third place in the championship, but due to a great action by Carlos Sainz in the last lap (which for the umpteenth time was not on TV), the Spaniard finished in tenth place and gained a point that made him finish sixth in the drivers championship.

All in all a nice race to watch, but as so often this season, it would get a tailspin. More about that later. Here are the results first.

Confirmation of Lewis Hamilton’s victory, ahead of Max Verstappen and Charles Leclerc

Valtteri Bottas finished in P4 after starting from the back of the grid#AbuDhabi2019 #F1 pic.twitter.com/Ifg7yAiL2R

Was Mercedes with Lewis Hamilton a worthy winner?

From 2014, Mercedes has always won the race, so everyone expected that to happen again this weekend. Although Lewis Hamilton was simply the fastest, Max Verstappen kept him honest. Valtteri Bottas was also very fast, but because he had gotten new engines, he had to start from the back.

In the end, Lewis Hamilton won with ease and it has to be said, with Valtteri Bottas ultimately on P4, I think they did indeed win as a team in a worthy way.

Even after both championships had already been decided in favour of Mercedes, they continued to work towards improvements and gave nothing away. Now on to 2020 in which the rules remain roughly the same and it will make me wonder if Mercedes can maintain their dominance.

Signing off on a special 2019 @F1 season with victory for Lewis around Yas Marina #AbuDhabiGP https://t.co/t09dKhlwy5

I don’t want to say flawless. They were also a bit lucky. Already during qualifying it didn’t go perfect when Charles Leclerc didn’t have enough time to set up a second fast lap, but also during the race it didn’t go smoothly. Sebastian Vettel started the race on the soft tyres while the rest around him started on the medium tyre.

It was expected that Sebastian Vettel would have more grip in the beginning and would come forward quickly. This didn’t happen at all. It was Charles Leclerc himself, who fell back a bit after the start but who was faster than his team mate and even overtook Max Verstappen for second position in the race.

Ferrari twice had a double pit stop, but at the first it went wrong for Sebastian Vettel when the mechanics had trouble with both the front left and the rear left. Sebastian Vettel was unable to catch up during the rest of the race.

Charles Leclerc couldn’t get higher than the third position after two pit stops and found himself behind Max Verstappen, even a third pit stop for a set of soft tyres didn’t help, as Charles Leclerc just couldn’t produce the fastest lap and so that extra point didn’t go to him either, but to Lewis Hamilton. But was that all?

s so often this season, the results remained provisional and only later in the evening the word came out. There was a difference of no less than 4.88 kilograms more that was actually in the car and what Ferrari mentioned. A decision was made and Charles Leclerc was allowed to keep his third place, but Ferrari was fined 50000 euros.

For the team from Maranello this isn’t much, but it does fit in with the list of investigations that have been carried out against Ferrari this season. We’ll see how they’ll start in 2020 and whether they’ll be able to parry the supremacy of Mercedes.

Did Red Bull take out what was in it?

Max Verstappen qualified second, but after the start it went backwards for a while. Still he kept on doing good lap times, but after his pit stop it turned out that there were some problems with the engine mapping.

He got problems with “lag” and Max Verstappen also had the feeling that the handbrake was often on. After changing some settings on the steering wheel and driving a bit different from what he actually wanted, he not only finished the race, but he also managed to overtake Charles Leclerc on track and finish second.

This position also brought him third place in the drivers championship so he can prepare for the FIA gala in Monaco later this year. Alexander Albon started fifth after Valtteri Bottas was put back by his engine penalty, but he couldn’t hold on to his fifth place and ended up sixth. For what was able to do in Abu Dhabi, I think Red Bull got out of it what was in it.

For 2020 the goal is to be more consistant. If Red Bull and Honda manage to get more out of the engine, they could be a serious title contender.

Who was best of the rest?

That choice was pretty easy. I go for Carlos Sainz. As so often this year, the director “forgot” him and we didn’t see much of him on TV, but up until the end, Carlos Sainz fought for a point. In the last lap, the last chance he had, he grabbed the moment with both hands and defeated Daniel Ricciardo and took P10, which earned him a point and thus the sixth position in the drivers’ championship.

McLaren has done very well this year and to finish fourth in the constructors’ championship and sixth in the drivers’ championship is a good job. By 2020, I hope they will be able to continue this and have a better chance of a podium finish than they have had so far.

“Thank you to our fabulous fans, who make it all worthwhile.” #AbuDhabiGP

Were there any lows?

There were no real lows. Lance Stroll couldn’t make it happen, George Russell and Robert Kubica didn’t have the speed, both Kevin Magnussen and Romain Grosjean went more backwards than forwards, but who had the most bad luck were Daniel Ricciardo and Nico Hulkenberg from Renault. They started the race in the top 10, but ended in P11 and P12.

“It was a worthy final race for me with the team. I crossed the line with good feelings.”
Nico Hülkenberg – #AbuDhabiGP, Sunday
Full report https://t.co/MMolIFn4WD#RSspirit pic.twitter.com/GGdlxLlIfv

The moment Max Verstappen asks his engineer if Ferrari is on a 2 stop strategy because he heard the wheel guns of the Ferrari team in the background. I was very impressed because to drive well over 300km per hour, then have to operate all kinds of buttons on the steering wheel and STILL be able to pay attention to such details, chapeau.
Of course we also thought about the fact that this was the last race of both Nico Hulkenberg and Robert Kubica. Nico Hulkenberg will be replaced by Esteban Ocon while Robert Kubica will hand over the wheel to Canadian Nicholas Latifi. Fun fact, when the 2020 season starts, it will be the first time since China 2005 that there won’t be a Nico on the grid.

#F1 #AbuDhabiGP Verstappen to JP: “Ferrari on a 2-stop ? I can hear them behind you. hahaha”. The things a driver picks up on. #MsportXtra

How busy was it on social media?

The last race of the season. The championships were already pretty much decided. This also meant that the attention for the last race was a bit less. Considering the history of the race, most of them already knew that the chance of Mercedes winning would be very high.

Furthermore, there were no real battles anymore for positions of importance in the final standings and so it was very quiet on social media.

Of course, there was a lot of activity after the race when it became known that Ferrari might have been very naughty and there was a chance that the results could change. In the end, it was not too bad for Ferrari and they could sign off the season with a 50000 euro fine.

P3 retained for @Charles_Leclerc in Abu Dhabi after investigation

Furthermore, there will be WEC and WTCR in mid-December and that information will, of course, be shared at that time on my MsportXtra website.

Care for an epilogue?

I would like to take this opportunity to thank everyone for their words of praise, their criticism and their tips. This was my first year that I wrote about Formula 1 for a website and that I was able to share my opinions with other fans.

That’s why I would like to personally thank Paul Velasco, who saw more in me than just the crazy Dutchman who shares all the news. I enjoyed writing #TheXtraLap for a total of 31 times and hope to be able to do it again next year.