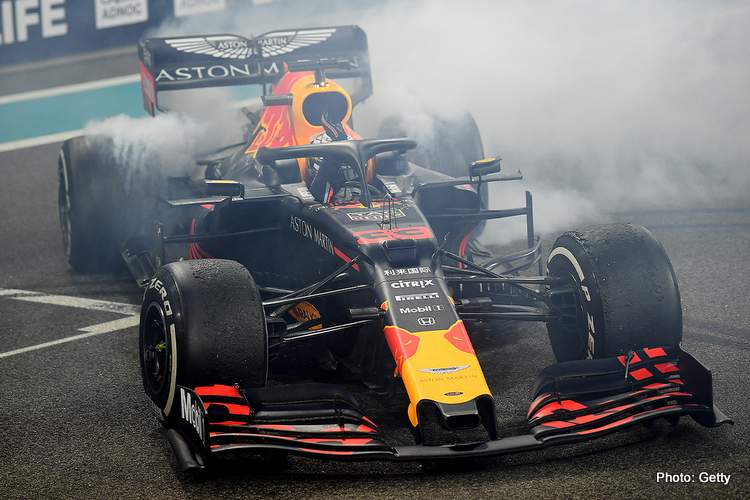 Red Bull report from the Abu Dhabi Grand Prix, Round 21 of the 2019 Formula 1 World Championship, at Yas Marina Circuit in the United Arab Emirates – the final race of the season.

Max Verstappen, P2: “Of course I’m very happy to finish the season with a podium and to be third in the championship ahead of both Ferraris is also a good achievement. On this track today Mercedes and Lewis were just a bit too quick but as a Team, we had a good strategy, good pit stops and the car was working really well so second place is a good result on this track.

“The pace was good and overall we were quite a bit faster than the other guys which is a nice feeling. Looking back my highlight of the season was Austria. To take the first victory for Honda in the V6 era was very emotional and as a Team to win at our home track again in front of so many Dutch fans was a great feeling.

“It’s been a good season and the Team never stopped pushing. Honda also made some great improvements so we can be very happy with our first season together. As a Team we want to move forward next year and fight for the title. We need to push flat out to close the gap but looking at the last few races we have made a positive step. It’s a great ending and now we just want to focus ahead and be even more competitive in 2020.”

Alex Albon, P6: “The race didn’t turn out quite how we wanted but we will have a look at it. We pitted early to try and undercut Seb but it didn’t work and then we got stuck behind a train of traffic without DRS. That made for a long second stint and the tyres just didn’t last until the end and Seb cleared a lot of cars quicker than we probably expected.

“It’s one of those things but looking back over the season I can be happy. I know there’s some work to do and areas I have to improve but it’s my rookie year so that’s always going to be the case. I feel like the racing has been good, the pace still needs work, but that will come with experience.

“We’re testing next week so we’ll continue the hard work and come back stronger next year. It’s nice to spend the winter knowing where I’ll be racing next year so I can focus on the job in hand. I’m really enjoying working with the Team so I can’t wait for 2020.”

Christian Horner, Team Principal: “It was a very strong race for Max to finish second and cement third in the Drivers’ Championship. It was his ninth podium of the year and our 170th in total. We lost a position on the first lap to Leclerc but with good strategy and pace, Max got back past and it was a very comfortable second place to the end of the race.

“Alex was in the thick of it and his pace with Sebastian was right there today. We tried to take advantage of Ferrari’s pit stop mishap by covering them off and it was very close but we just missed out. When Seb made his second stop we elected to do the opposite and we knew it would come down to the last couple of laps. P6 for Alex today is still a very positive result, he’s learned so much in the nine races he’s done with us with eight of them finishing in the top six. I’m sure we’re going to see much more from him next year.

“It’s always good to finish the year with donuts down the main straight, which our drivers are very good at, and I think it’s been a great second half of the year for Formula One. For us, it’s very much been a transitionary year with Honda but as a Team we can be proud of our achievements and we go into the winter with good confidence.”

One last blast for the RB15! 🔊 Signing off in style at the #AbuDhabiGP 🇦🇪🍩 #F1 pic.twitter.com/osjiG2ysgB