Hamilton: This beautiful car is a piece of art 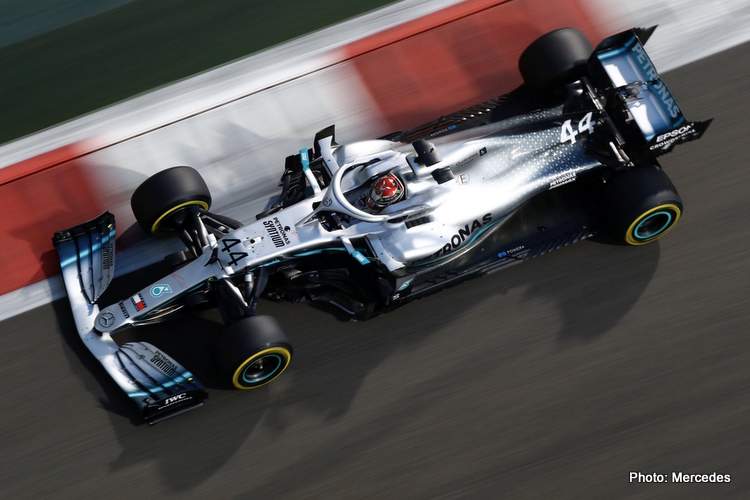 Six-times Formula 1 World Champion Lewis Hamilton hailed his Mercedes W10 as a work of art after he wrapped up the season in style by cruising unchallenged to a dominant victory in Abu Dhabi on the occasion of his 250th grand prix start.

The 34-year-old Mercedes driver led every lap from pole position to chequered flag, banging in a fastest lap of the race for good measure to emphasise his supremacy under the Yas Marina floodlights.

Red Bull’s Dutch driver Max Verstappen was runner-up, 16.7 seconds behind the Briton, to cement third place in the championship.

Ferrari’s Charles Leclerc was third but in danger of disqualification for a fuel irregularity.

Valtteri Bottas finished fourth for Mercedes after starting last on the grid due to engine penalties, with Ferrari’s Sebastian Vettel fifth.

“That was an absolute master class,” said Hamilton’s engineer over the radio, congratulating the Briton — who won his sixth title in Texas last month — on the cool-down lap. “You look like you didn’t break into a sweat.”

“I can assure you, I am definitely sweating!” Hamilton responded.

His 84th career victory, record fifth in Abu Dhabi and 11th of the season meant the Briton equalled his own Formula One record of 33 consecutive finishes in the points.

The 11 wins in a season matched his personal best for a campaign, achieved in 2014 and 2018, with a record points haul of 413. He is now only seven wins short of Michael Schumacher’s all-time record of 91.

Mercedes had already won both championships for an unprecedented sixth season in a row.

“Even though we had the championship won, I just really wanted to keep my head down and see if we could learn and extract more from this beautiful car that’s a piece of art. I feel so happy with today, man,” said Hamilton

The Wold Champion gazed across to the two 22-year-olds completing the podium and looked forward to more battles.

“I really feel privileged to be in the period of time when they are here,” he said. “I hope it gets closer for us next year.”

While Hamilton was out ahead, Verstappen and Leclerc engaged in a battle for second place.

The Red Bull driver started alongside Hamilton on the front row of the grid but could not stop Leclerc from sailing past on the first lap.

Having pitted much later than his rival, Verstappen was able to catch and pass the Ferrari on his fresher tyres forcing the Maranello team to switch to ‘Plan C’, meaning a two-stop strategy.

“Our pace was quite decent but Mercedes and Lewis were too quick,” said Verstappen who suffered from engine-braking issues during the race. “Overall it’s been a positive season and to be P3 in the championship is encouraging.”

Leclerc’s race had a cloud hanging over it after regulators found a ‘significant’ discrepancy between the amount of fuel Ferrari had declared and what was actually in the car.

The team were summoned to the stewards after the race.

Ferrari tried everything, including a botched double-stack pitstop, to squeeze something positive from the final race of an ultimately disappointing season.

Leclerc, who has won two races this season and taken the most poles, still saw the positives.

“I’m extremely happy about this year,” said the Monegasque who has beaten four-times F1 world champion Sebastian Vettel in his first season with the team.

🙌 Pole-to-win number 50 of his career