Haas: We got a bit bruised this year but we’re not broken 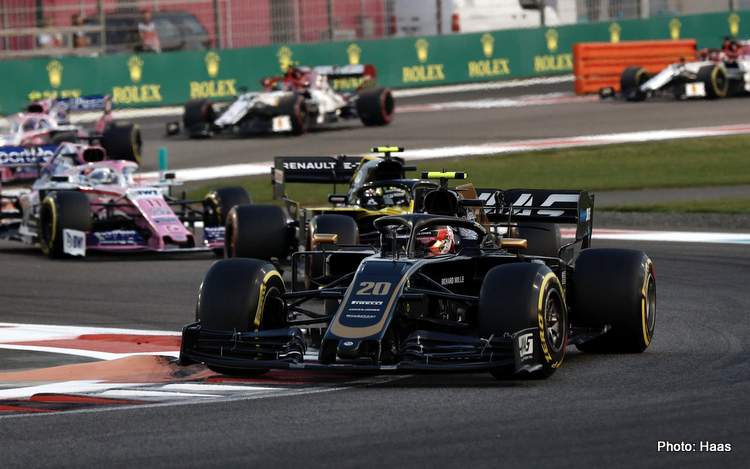 Both Haas F1 drivers started on fresh sets of Pirelli P Zero Yellow medium tires and had mixed results from their grid positions of 14th for Magnussen and 15th for Grosjean at the start. Magnussen picked up five positions on the opening lap while Grosjean dropped a pair of positions to 17th, and both held those relative positions through the early going.

Grosjean was up to 12th before pitting for a set of White hard tires on lap 18, dropping him to 19th with several competitors ahead of him yet to pit. Magnussen was up to eighth before his stop for hard rubber on lap 21, and he resumed in 14th.

The Haas F1 duo held steady the rest of the way with Magnussen up to 14th by the checkered flag and Grosjean up to 15th.

Polesitter and season champion Lewis Hamilton drove his Mercedes to his 11th victory of 2019, the 84th of his career, and his fifth at Yas Marina. He finished 16.772 seconds ahead of runner-up Max Verstappen of Red Bull Racing while Scuderia Ferrari driver Charles Leclerc crossed the finish line third.

Romain Grosjean, P15: “It was a tough race. I think Friday afternoon’s crash with Bottas compromised a lot for today’s race, we just had the one floor of that package and that’s what we practiced with. We had to change the specification and revert to another one, which we knew, but it was always going to be tough from there, we only had FP2 as a representative session.

“I think from my side, I need to work on my starts in the races. It’s been a big weakness of mine this year. If we qualify well next year I want to make sure I have good starts. We worked as well as we could in the race, and the guys on the team did a good job again – we just didn’t have the pace. Hopefully next year is a much better story.”

Kevin Magnussen, P14: “I made a really good start again, my first lap was good. Unfortunately, from there we didn’t really have the pace that everyone else had, and I lost those places eventually. We fought as hard as we could. I’m happy with how the team’s been performing, in races like this it’s very tough, mentally, to stay on it, and keep extracting things from it when things have been bad.

“Everyone’s on it though, everyone’s looking for that last bit just in case something crazy happens like a safety car at the right time or something like that. We always give ourselves the best chance for that. That’s been the trend all year – the team’s really kept on it even though it’s been very tough. I think we’re all happy to get out of this year and completely shift our focus to 2020. Hopefully it’s a much better year.”

Guenther Steiner, Team Principal: “The season ended as we expected. We got the most out of the car today. We’re glad the season is over and now we can focus on next year. We got a little bit bruised this year, but we’re not broken – we will come back. The aim is to forget 2019 and start next season as we left off 2018. The focus is on next year and we’re really looking forward to that work.”