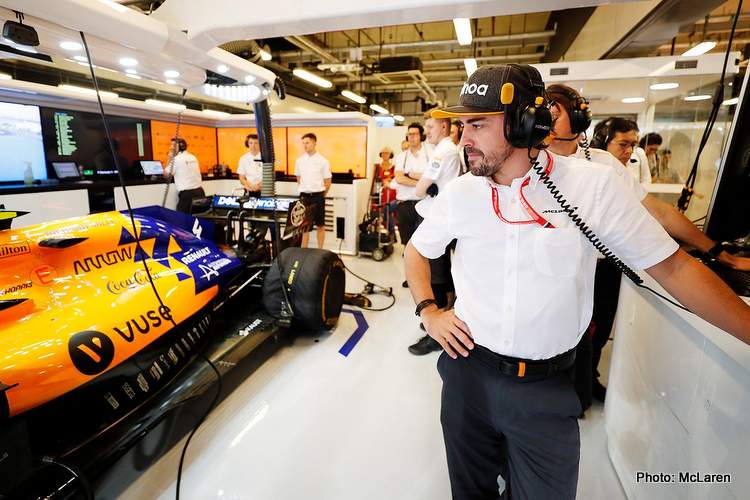 Double Formula 1 World Champion Fernando Alonso might be to be stepping up his bid to return to Formula 1 by making himself available for the 2021 season should a winning team come calling.

The Spaniard, who quit McLaren and F1 at the end of last year, was back doing the rounds in the paddock at Yas Marina Circuit.

One observer even saw the 38-year-old, who will tackle the Dakar rally and the Indy 500 next year, in conversation with Liberty Media officials.

Alonso then told reporters that he is keeping the door to F1 open for 2021, “I’m doing Dakar in January which is a big challenge and next year hopefully Indy is in the plan again. I’ll try and do a little bit better than this year!

“We will keep it open in the future, maybe Formula 1 in 2021, maybe hypercar in the WEC. I think in 2021 that is the reason why I keep open the possibilities. Maybe things mix up with the new rules so let’s see if an opportunity comes,” added Alonso.

Meanwhile, 34-year-old Lewis Hamilton joked when he told reporters in Abu Dhabi, “I’d welcome an older dude, he can come along.”

The Mercedes driver added, “Fernando’s obviously a well-accomplished driver and it’s interesting when drivers want to come back like Michael [Schumacher]. It’s something you’ve done your whole life.

“I haven’t spoken to Fernando so I don’t know how he’s been feeling or how much he’s missed it, but I don’t think it would be bad for the sport,” the Mercedes driver added.

However, Hamilton cautioned that Alonso’s comeback would mean a seat is taken up that could otherwise give a young driver his break in Formula 1, “There’s a lot of young kids on their way up and there are only 20 seats, so he has also had his period of time here.”

“But if there’s no other good youngsters coming through then there is definitely space here that probably could be replaced. So I would welcome it,” insisted the six-time World Champion who was Alonso’s teammate at McLaren in 2007.

Red Bull’s Max Verstappen agreed, “It would be good to see him if he could come back in a competitive car. Otherwise, I think it’s just a waste of time for him, but I think he knows that himself.”

After his woeful spell with McLaren, Alonso departed the top-flight promising he would only return with a big three team, or at least an outfit capable of winning races and the title.

Meanwhile, the 2021 Silly Season has already kicked in with reports that Ferrari are romancing Lewis Hamilton for a shock move to the Scuderia at the end of next season.

Red Bull have Max Verstappen seeking a winning cockpit and of course Ferrari where the driver feud is likely to end badly for Sebastian Vettel.

Big Question: What chance Fernando returns to the F1 grid to race?