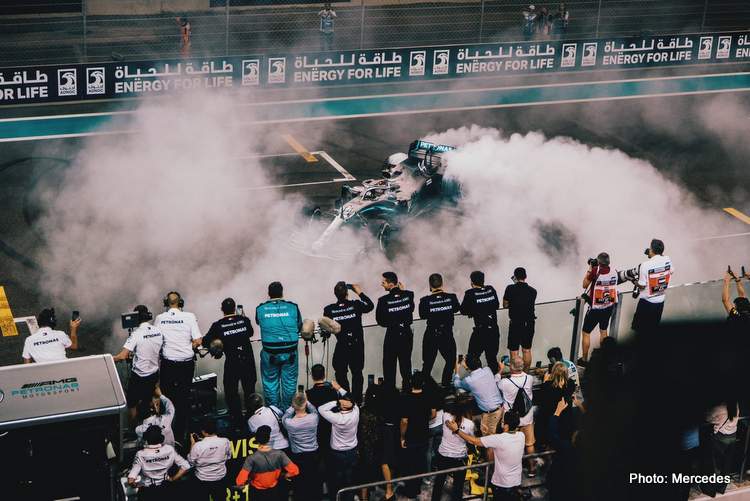 Lewis Hamilton dominated the 2019 Formula 1 season finale Abu Dhabi Grand Prix with a dominant victory under the lights of the luxury Yas Marina Circuit to crown his sixth title-winning year in fine style.

The Mercedes driver dominated from pole-position and even retained his lead when he stopped for fresh rubber to claim his 84th Grand Prix victory on the 250th F1 start, his 11th of this year and his fifth at the desert venue.

The win on the night simply underlined and was a reminder of the dominance the Briton and the German team during the first half of the season when they did the business long before the final evening in Abu Dhabi.

Hamilton, who also set the fastest lap for good measure, said afterwards, “I’m proud definitely but just super grateful for this incredible team. To all at Mercedes who have continued to push this year. Who would have thought at the end of the year we would have this strength in the race?

“Even though we had the championship won we just wanted to keep our head down and to see if we can learn and extract more from this beautiful car. It’s a piece of art,” gushed the World Champion.

Valtteri Bottas drove a solid race and made maximum use of the superior W10 to scythe through the field from back of the grid to claim fourth place after helping his team lock out the top two spots on the timing screens after qualifying a day earlier. Without the engine penalty, it would have most likely have been a one-two for the Silver cars in the race.

The Finn summed up, “Coming from the back we had a really strong race today it was difficult nearly 20 laps without DRS [which] made it more difficult to make progress through the field.

“I need more consistency over the season, Lewis is always there,” he gestures a level with his hand, “and I need to find the balance and the ways to be at my best more often. As a driver, there’s many things to learn and improve from this year that we will be working a lot on over the winter.

“It is really learning from the mistakes from this year – looking at in detail what caused it and how to avoid it and I’m sure I can figure it out, I have good confidence from this season,” added Bottas.

On the night, Mercedes also sent out an ominous message to their rivals with a display that had shades of the mighty outfit that has been almost unbeatable in the past six years. They go into the winter firmly entrenched on the higher ground.

After a start that saw both Red Bull drivers struggle with grip, Max Verstappen spent a large chunk of the race complaining but at the same time he managed to get by Ferrari’s Charles Leclerc for second place but the Dutchman had no answer for the winner. Teammate Alex Albon was sixth.

In the wake of an embarrassing qualifying, on Saturday for the Reds, Leclerc salvaged third with Sebastian Vettel taking fifth which he snatched after a late-race chase of Albon.

Ferrari botched a double-stack pitstop in an effort to muster something of a challenge in the finale as consolation for a disappointing error-strewn season. But, it would be safe to say, they won’t go into the winter very happy.

After the race, Leclerc’s fate remained to be seen as officials will be addressing a qualifying fuel issue with regards to the Ferrari,  that emerged overnight after Saturday’s qualifying. Watch this space.

Sergio Perez triumphed in a riveting battle for Best of the Rest, grabbing seventh place after a race ling tactical duel with McLaren duo Lando Norris and Carlos Sainz, Renault’s Nico Hulkenberg and Daniel Ricciardo as well as Daniil Kvyat in the Toro Rosso.

In the end, Perez, a master under pressure and in races of high attrition, grabbed seventh place with a last lap attack on Norris which paid off. Kvyat was ninth, while Sainz – who made a late pitstop for fresh rubber – claimed the final point to deny the Renault duo.

Hulkenberg, in his 178th and final F1 race, was voted Driver of the Day for his efforts in Abu Dhabi on Sunday.

There was a message in there somewhere, at the very end of the race, when the most successful (and best) driver of this era did donuts on the start/finish straight with his apparent heirs Leclerc and Verstappen following the example of the six-time F1 World Champion.

Hamilton made a good start from P1 to lead into the first corner. Behind him, Verstappen also got away well but quickly came under pressure from Ferrari’s fast-starting Leclerc. Verstappen defended but at the end of the long second straight, the Ferrari man swept past the red Bull to take P2.

Behind him Vettel in the second Ferrari settled into fourth ahead of the second Red Bull of Albon. The Thai driver came under pressure in the early laps from the McLarens of sixth-placed Norris and Sainz who had passed Renault’s Ricciardo off the line to steal P7 but he was able to fend off the challenge and the field settled into the first stint.

Norris opened the pit stop window for the leading soft tyre starters by shedding his starting tyres for hard compound Pirellis on lap eight and Ferrari pitted both its drivers at the end of lap 12. Leclerc’s stop for hard tyres went smoothly, there was a problem with Vettel’s front left wheel and the German lost time while the problem was rectified.

Leclerc resumed in P4 behind Hamilton, Max and Alex, but Vettel slipped to seventh. Red Bull Racing then pitted Albon and the Thai driver rejoined just two seconds behind Vettel.

At the front, Hamilton and Verstappen continued to circulate their starting medium tyres and while others further back pitted, Valtteri Bottas, who had started from due to engine penalties, rose to fourth place behind Leclerc, with Vettel fifth and Albon sixth.

Verstappen eventually made his sole stop of the evening on lap 25, taking on hard tyres. He emerged in third place, though just four seconds behind Leclerc and on newer tyres. Mercedes then brought Hamilton in at the end of the next lap and with a sizeable gap back to Leclerc the Briton rejoined in the lead.

After his pit stop Verstappen began to report throttle problems in his car but despite the difficulty he quickly closed down Leclerc and on lap 32 muscled past the Ferrari down the inside into Turn 8. Leclerc fought back by trying to retake P2 around the outside into Turn 11 but Max held a strong line and Leclerc was forced to give up the fight.

Further back, Bottas was closing hard on the leaders and on lap 39 he reeled in Albon and charged past the Red Bull man. With the Finn on a charge, Ferrari opted to pit both its drivers on lap 38 and when they emerged, Leclerc found himself 29 seconds behind Verstappen, while Vettel was 18.6s behind of Albon.

Armed with new medium tyres, Vettel then closed on Albon and the penultimate lap the German powered past the Red Bull to settle for sixth place.

At the front, Hamilton marched on serenely and after 55 laps he crossed the line to take his 11thvictory ahead of Verstappen, for whom P2 ahead of the Ferrari of Charles Leclerc was enough to seal third place in the Drivers’ Championship. Fourth place went to Mercedes’ Bottas, with Vettel fifth ahead of Alex.

There was plenty of drama in the lower half of the top 10 on the final lap as Pérez passed Norris for seventh place, while behind ninth-placed Kvyat, Sainz stole P10 from Ricciardo.

A fitting goodbye to the @MercedesAMGF1 W10, from @LewisHamilton 🙌#AbuDhabiGP 🇦🇪 #F1 pic.twitter.com/0Wy4Xn1hP8 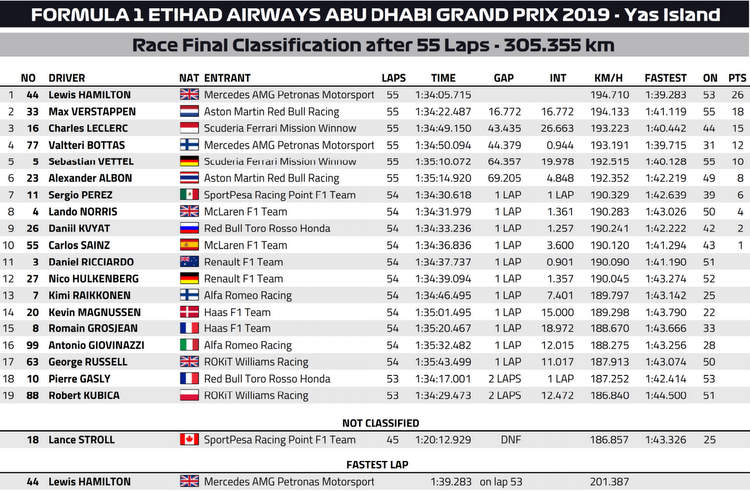 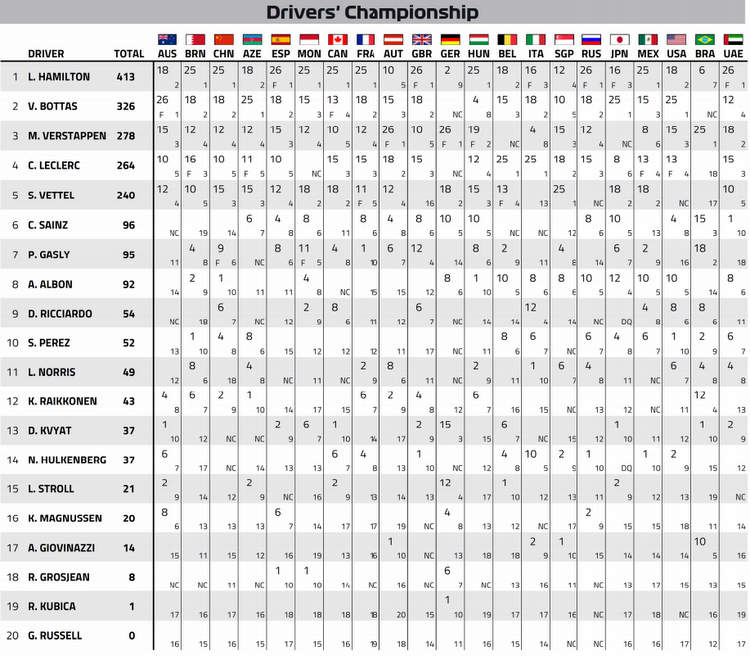 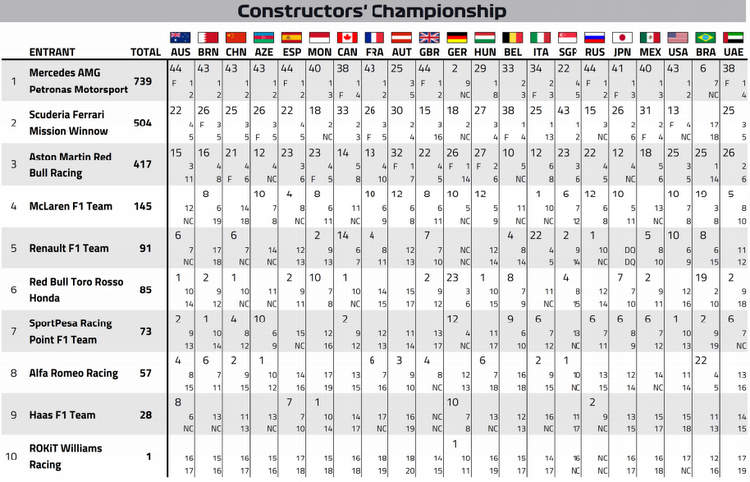 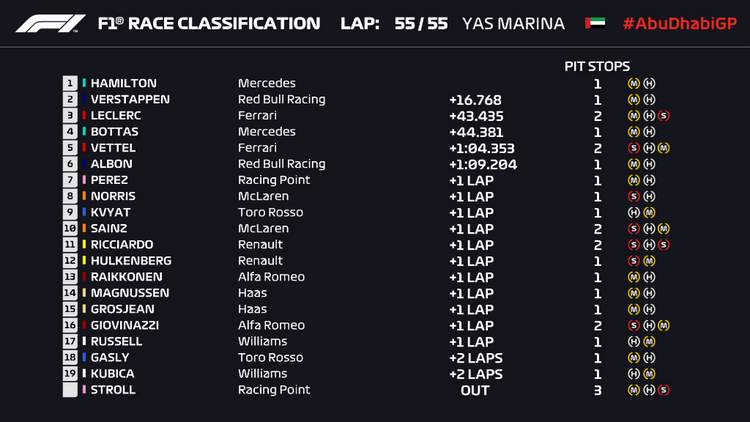 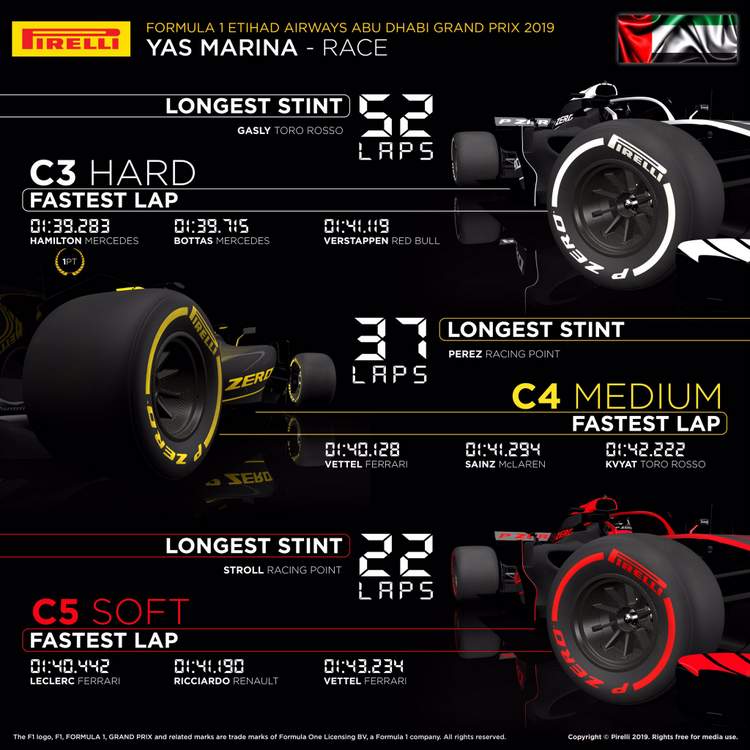 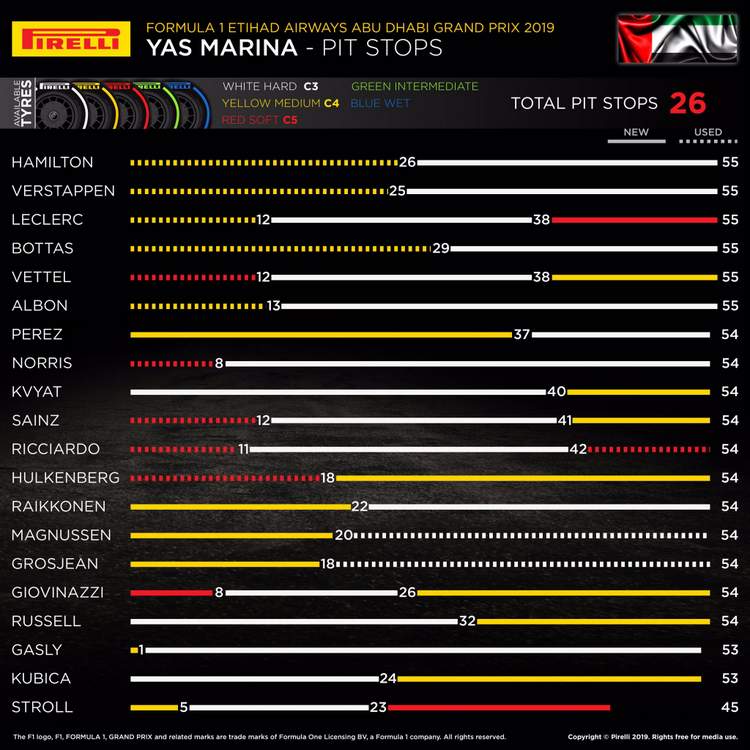