Toro Rosso: Slightly under delivered on the potential 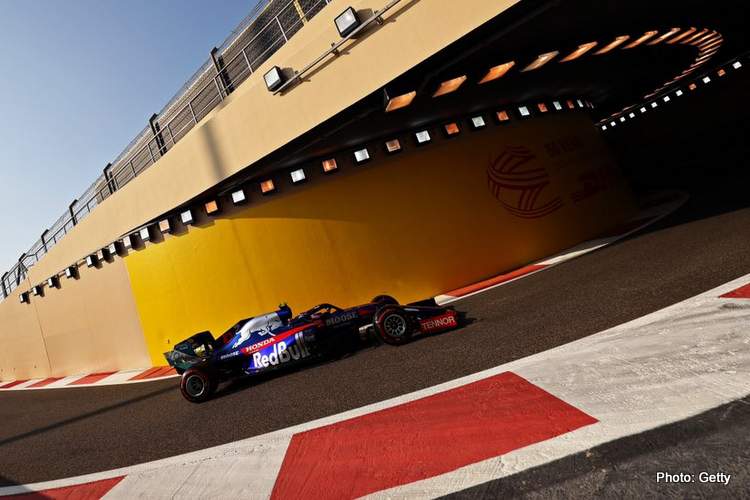 Toro Rosso report from qualifying for the Abu Dhabi Grand Prix, Round 21 of the 2019 Formula 1 World Championship, at Yas Marina Circuit in the United Arab Emirates – the final race of the season.

Pierre Gasly, 12th: “It was a bit of trickier session for us in Qualifying compared to the rest of the weekend. We were sliding a lot and we weren’t as competitive as this morning. We’ll try to understand the reason for this tonight, but all in all it’s not bad because we start from 11th position tomorrow and have a free choice of tyres. We knew we had more degradation with the Soft compound, so hopefully this will play in our favour during the race as our long runs looked strong yesterday.”

Daniil Kvyat: 14th: “The car didn’t really feel great today and I was sliding around in Qualifying. I never really found good grip on the tyres and the car didn’t click. The only decent lap I got in was the first lap of Q2, the rest I just had a bad feeling in the car. We hope things will be better tomorrow, the race is different to Qualifying, you can play with the strategy and, if everything works well, there’s always a chance to move up the grid.”

Jody Egginton, Technical Director: “Following on from a productive Friday, FP3 was again positive with both sides of the garage fairly happy with the setup going into Qualifying. Qualifying itself was ‘ok’ but nothing more, as we were having to chase the balance more than ideal in Q2, which means we have potentially slightly under delivered on the potential tonight.

“However, the differences in tyre life across the compounds here means that lining up outside of the top 10 with a free tyre choice potentially provides some extra chances to battle the cars ahead. As such, we are very focused on making best use of our two cars to take whatever opportunity presents itself in what we expect it could be another exciting battle in the midfield tomorrow.”