Renault: Everything went perfectly to plan 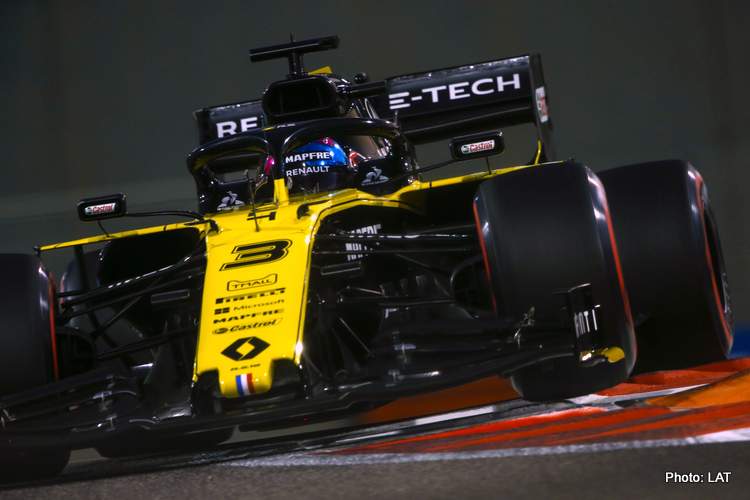 Renault F1 Team will start tomorrow’s Etihad Airways Abu Dhabi Grand Prix from seventh and ninth place on the grid as Daniel Ricciardo and Nico Hülkenberg enjoyed a superb qualifying under the lights of the Yas Marina Circuit.

Daniel and Nico made two runs in the initial segment of qualifying, swiftly moving through to Q2 for a further shot at the top ten. In an incredibly tight field, both Renault R.S.19 cars progressed through to Q3 for the first time since the Russian Grand Prix, with Daniel finishing eighth on track with a lap of 1min 36.456secs, just two hundredths of a second behind seventh-placed Lando Norris, and Nico tenth with a 1min 36.710secs.

Both drivers gained a place with the application of post-qualifying penalties.

Nico Hülkenberg, P10: “We’ll take tenth today. I was pleased with the laps I produced throughout all three sessions. It was a bit tricky at the start, I was chasing the feeling in the car and I did the best I could. We were on the back foot a little bit after yesterday, but we recovered well and found some performance overnight and today. It’s positive for the team, with both cars in Q3. I think it’s going to be exciting and tight tomorrow. We’re in a race for fifth and it’s all to play for.”

Daniel Ricciardo, P8: “I’m really happy with today’s qualifying. It’s cool for both cars to be in Q3. We’ve made a good turnaround from Friday and that’s what I’m most proud about. The jump we made is really strong and encouraging and credit to the team for working hard overnight. It was close out there again today but we’re in the mix inside the top ten. There’s a bit of pressure in the fight for fifth and there’s a job to do. We delivered today and now we have to deliver tomorrow.”

Alan Permane, Sporting Director: “It was a slick qualifying and everything went perfectly to plan; traffic management, timings, garage turnarounds and driver performance. We did our homework and got both the balance and tyre temperatures under control for FP3 and qualifying. With solid sessions from both drivers and also the race crew in the garage, we can be pleased with that outcome. It’s given us a good basis for the race tomorrow.”