Ferrari: Unfortunately we encountered some traffic 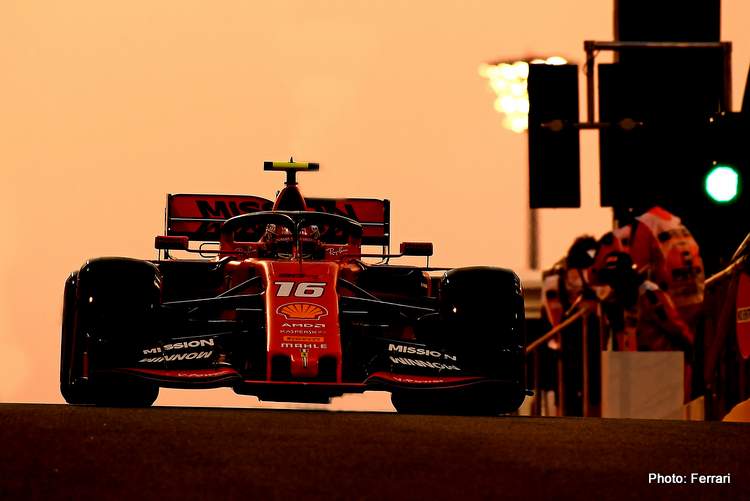 The Scuderia Ferrari Mission Winnow drivers will start tomorrow’s Abu Dhabi Grand Prix from the second row of the grid, with Charles Leclerc on the third spot, using Medium tyres, while Sebastian Vettel will be alongside him running the Softs.

Q2. In this session, both Ferraris started on Soft tyres with first laps good enough to make the cut: 1’35”697 for Leclerc and 1’35”786 for Vettel. Given that the track was evolving rapidly, the team decided to send Charles out again on the Mediums and opt for a different tyre strategy to Sebastian’s. The Monegasque managed to improve with a 1’35”543, on the same tyre as Lewis Hamilton, Max Verstappen and Valtteri Bottas.

Q3. Having made it through to the final session, the plan was to go for two timed runs. Charles first did a 1’35”219, good enough for fourth and a tenth quicker than Sebastian’s fifth-placed time of 1’35”339. They then both pitted for a new set of Softs.

Second run. The team waited until the final seconds of the session before sending the two SF90s back out, with the intention of benefiting from the best possible track conditions. However, on the warm-up lap, the train of cars that was running ahead of Sebastian, slowed down, as all the drivers were trying to get the best possible run at a clean lap. As a consequence, Sebastian did not get his tyres up to temperature, made a mistake at the first corner and failed to improve his time. Charles didn’t even get to cross the line to start his lap before the chequered flag was waved. So Leclerc and Vettel had to settle for fourth and fifth, but with Bottas going to the back of the grid with a penalty, the Ferraris will start alongside one another on the second row, behind Lewis Hamilton and Max Verstappen.

Charles Leclerc, P3: “Qualifying was tough today. The lap I did on the first run for fourth place was good, but you can always do better. It’s a shame that we didn’t manage to get back out in time to do another lap. Though pole seems to have been out of reach today, I do believe that we had an opportunity to have a better result, but that’s just how it goes sometimes.

“Ahead of the race, we will mainly have to work on making improvements in the last sector. That’s where we lacked the most in terms of our performance.

“It is the last race of the year, the last chance to get third place back in the championship, which will not be easy. I will have to take some risks at the start to fight for it and will give it my all. Let’s see what we can do.”

Sebastian Vettel, P4:  “I will start from P4 tomorrow but today’s Q3 was not ideal. We are struggling a lot in the final sector where there are some corners in which we are simply not quick enough. It’s probably not the best track for us, but we’ll see what we can do tomorrow.

“In the last part of the session it was a pity because everybody was so slow. As a result, my tyres were too cold when I started my lap and I lost the car immediately in the first corner. And Charles wasn’t even able to start his lap. The reason why we are slow in the last corner is maybe that we are sliding more than the others, because we are struggling to get the tyres working correctly.

“Tomorrow we will do our best, but it won’t be an easy race. But we are looking for opportunities. That’s why we have chosen a different tyre compound and will see if we are right to start on Softs.” quote

Mattia Binotto, Team Principal: We went into qualifying today knowing that, all weekend we were not fast enough in the third sector, so we had to come up with something.

“In the first run in Q3 we were still a long way off pole so we decided to really go for it at the end, when the track was improving, by going out at the very last minute, aiming to have the track in the best conditions.

“We knew it would be tight and we were well aware of the risk we were taking, but we had to take it. Unfortunately, we encountered some traffic and that meant it didn’t work out for us.

“The call concerning which tyre to start the race on was very tight and here again we went for different strategies in order to make sure we’ll have the most opportunities tomorrow.