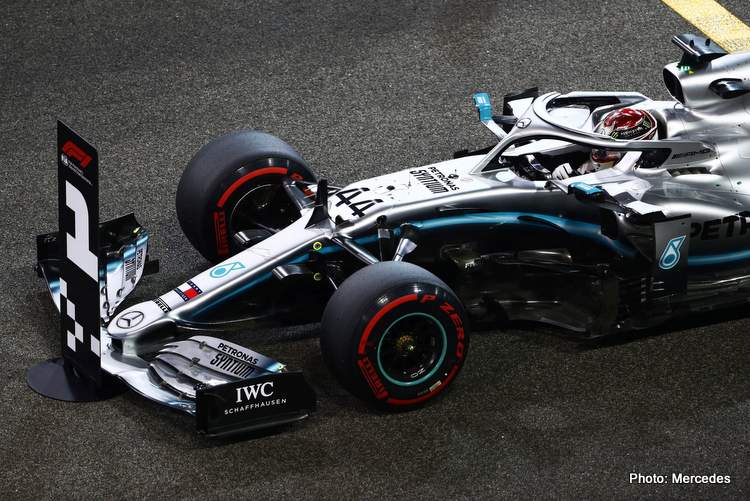 Lewis Hamilton was in supreme form as he claimed pole for the Abu Dhabi Grand Prix, on Sunday as Ferrari drivers were the joke of the session as their drivers again played games with one another.

Hamilton headed his teammate Valtteri Bottas making it six Silver one-twos in qualifying at Yas Marina Circuit in the past half dozen years. But the Finn will start the race from the back of the grid due to engine penalties.

It was pure Hammer-time from the six-time Formula 1 World Champion in his final two efforts during Q3, his first effort was the first to dip into the 34s and his final effort of 1:34.779 was a tad quicker and a couple of tenths up on Bottas.

After doing the business to take his 88th F1 pole, Hamilton reported, “It was such a long slog trying to get this pole position in and we just kept our heads down and the guys have done a great job. Yesterday was quite wobbly so I had to re-compose myself and had to come back today and re-focus. I managed to dial in the car with the hard work of the engineers.

“Every time I come Abu Dhabi the crowd are great and there’s a lot of love here. We never give up, there’s always room to improve. There’s been a lot of growth in the team and just over these last couple of races. Valtteri 2.0 has been rapid, especially this weekend. To end the qualifying season with a pole and to say goodbye to this car with a pole, is extra special,” he said.

Bottas said, “As a team, it has been a really strong day, we’ve had good pace, it didn’t feel as good today as yesterday but I think Lewis made some good improvements. In any case, I’m going to start last and we will find the fighting spirit tomorrow. I believe anything is possible, we have a very good car. Sunday is normally stronger for us and we’ll give it all we have.”

Max Verstappen was next best, the Red Bull driver 0.36 of a second down on the top time, but half a second up on teammate Alex Albon down in sixth.

Verstappen told reporters, “Today was the best we could do. Mercedes is quite dominant here. Overall, pretty happy. It is good to start on the front row. Still a lot of chances for the race and we will see what happens.”

Ferrari never looked comfortable during the session, exacerbated by Sebastian Vettel spinning on the pit straight as he started his first flyer in Q1.

Then, the German slowed too much as they queued up for their final runs in Q3 and as a result, Leclerc was unable to do a final flyer as the chequered waved before he crossed the line. Vettel blamed traffic ahead of him.

In the wake of the Brazil shenanigans, a pathetic performance by the Reds and whose team boss Mattia Binotto was adamant before the weekend that all was well with his drivers.

Leclerc said, from the cockpit, when the penny dropped, “We’re not going to make it, Seb is slowing down.”

Afterwards the Monegasque added, “It is life sometimes it happens, I don’t know if the situation was unlucky or we could’ve done something better. I need to finish in front of Max for the championship.”

Vettel gave his version, “This is probably a bad track for us. I think Albon had a McLaren in front of him, so I don’t think it was anyone’s fault. It was just a pity. My tyres were cold and I lost it in the first corner. Let’s try and see for what happens tomorrow.”

With Bottas demoted to the back of the grid, the Red pair start tomorrow’s race from row three…

Lando Norris was the star of Formula 1.5, turning the tales on his teammate Carlos Sainz who had the edge until Q3 when traffic interfered with his lap. On the other hand, his McLaren rookie teammate delivered an impressive lap to claim seventh place.

The Renault of Daniel Ricciardo split the two orange cars on the timing screens, with Nico Hulkenberg in tenth. The French manufacturer getting four cars into Q3 was a good achievement after a below-par start to the weekend for the quartet.

Hamilton set the pace in Q1 with the Mercedes driver claiming top spot thanks to a time of 1:35.851 that put him 0.3s ahead of Bottas in the final minutes of the session. Verstappen was in P3 having posted a lap of 1:36.390 on his first flying lap.

Ahead of the final runs, Albon in the second Red Bull was in sixth place and 1.4s off the pace after a cautious opening run and in the final stages of the session he opted to make another attempt. The Thai driver improved significantly and his time of 1:36.102 was good enough to propel him to P2 ahead of Bottas.

The first run of the session was also a tricky one for Vettel. The German was winding up for his first attempt but as he accelerated out of the final corner to begin his lap he lost control and spun on the pit straight. He recovered and eventually took P6 in the segment behind fourth-placed teammate Leclerc and Pérez who rose into the top 10 in the final moments of Q1.

At the other end of the order Grosjean was eliminated in 16thplace ahead of Alfa Romeo’s Giovinazzi and Räikkönen and the Williams cars of Russell and Kubica.

In Q2 Hamilton again set the early pace with a lap of 1:35.634 set on medium tyres. His choice of compound was mirrored by his team-mate and by Max and Alex. However, in the opening runs both Ferrari drivers ran with soft tyres.

In the final runs both Mercedes drivers and both Red Bull pilots backed out of soft tyre runs to guarantee a start on medium tyres. Ferrari, however, split their drivers, with Vettel progressing on soft tyres, while Leclerc vaulted to the top of the table with a impressive medium-tyre lap of 1:35.543 that put him almost a tenth clear of Hamilton with Bottas third and Vettel fourth ahead of Verstappen and soft tyre-shod Carlos Sainz.

Eliminated at the end of the session were 11th-placed Pérez, followed by Gasly, the second Racing Point of Stroll, the second Toro Rosso of Daniil Kvyat and the Haas of Magnussen.

Leclerc’s heroics wouldn’t cross over into Q3 however and Hamilton soon reasserted his dominance with a final run time of 1:35.779 that put him beyond reach of his rivals.

Bottas got closest, taking P2 just under two tenths of a second behind his team-mate, while Verstappen ended the session in third place, 0.164s behind the Finn. Behind the top three in the session Leclerc and Vettel qualified fourth and fifth for Ferrari, despite Leclerc missing out on a final lap as he failed to cross the line before the chequered flag.

That left sixth place to Albon. Norris qualified in seventh place for McLaren, with Ricciardo eighth ahead of the second McLaren of Sainz. The final top 10 place went to Hulkenberg. 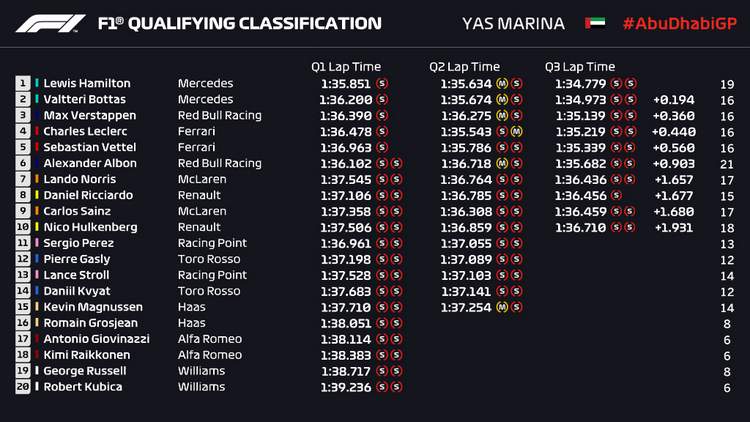