Williams: We enjoyed a productive Friday 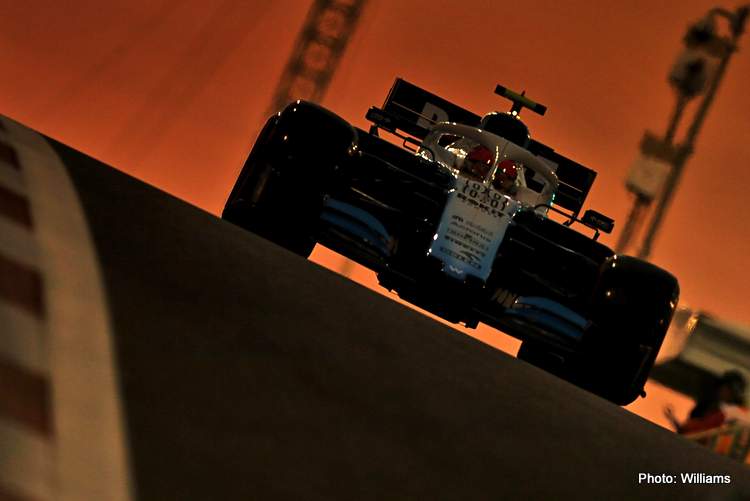 Williams report from day one of the Abu Dhabi Grand Prix weekend, Round 21 of the 2019 Formula 1 World Championship, at Yas Marina Circuit in the United Arab Emirates – the final race of the season.

Dave Robson, Senior Race Engineer: “We enjoyed a productive Friday as we conducted testing in the hot conditions of FP1 before turning our attention to qualifying and race preparation in FP2. The red flags in both sessions disrupted the flow a little, but, nonetheless, we adapted well and completed everything that we had planned.

“The cooler conditions in FP2, and the relatively soft compounds available at this event, helped improve the handling of the car, and this was particularly to George’s liking. Unfortunately, Robert was less happy in FP2 than he had been in FP1, and this is something that we will be looking at overnight.

“Tomorrow will be another day of two halves, with the track hot in FP3 before again cooling down before, and during qualifying. We will not pay too much attention to FP3 and instead will try to build on our FP2 findings as we seek the best balance for qualifying.

“Although we are rapidly approaching the end of a long and tricky season, it is inspiring to see that the team continues to work hard, professionally, and effectively. Their tireless efforts are very much appreciated, and their dedication to the cause will prove to be excellent preparation for next season.

George Russell: “The car was feeling nice to drive, probably one of the best of the year, but the pace was quite slow. It was tricky around the circuit, because it changes a lot from FP1 to FP2 as the conditions get cooler and it turns from day tonight. I was enjoying it and it was good fun to drive.

“I felt that I learnt something from FP2 in the long runs, especially after the red flag as our pace was stronger in relative terms. I have not been feeling great, but the session was good for me and I feel fine to drive, which is the most important thing.

Robert Kubica: “Today was quite a mixture. The first session was surprisingly good for the conditions we had on the track. I was pretty happy with the balance and with the things we were trying, which were more for next year.

“Normally FP2 is a better session in the cooler conditions and with lower track temperatures, but for us it was the opposite. We need to try and get back to having the behaviour and feeling of the car I had in FP1, so, as always, we will try our best, and hopefully it will work better tomorrow than it did this afternoon.