Bottas: Apologies but there was nowhere for me to disappear 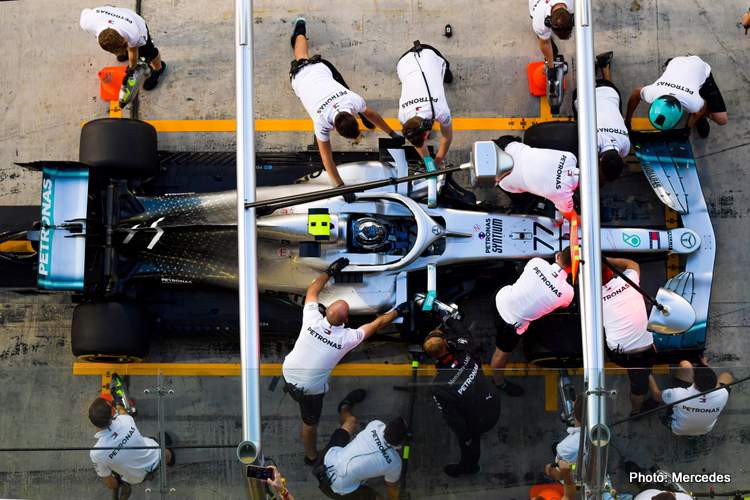 Valtteri Bottas was handed a reprimand for causing a collision on during practice on Friday as he topped the times ahead of teammate Lewis Hamilton in a Mercedes one-two on the first day of the Abu Dhabi Grand Prix weekend.

The 30-year-old Finn completed a ‘double top’ by going fastest in both sessions, making full use of a new power unit after suffering an engine failure in Brazil two weeks ago. The switch is costly however as he will take penalties that send him to the back of the grid.

Bottas tried to pass Romain Grosjean on the inside at Turn 12, but the Haas driver turned in and the pair collided. They were not hurt.

“I think he didn’t really see me coming up the inside,” explained Bottas. “My apologies, but there was nowhere for me to disappear. I went for the over-take and that was it.

“Honestly, I thought he would see me coming. He wasn’t covering the line so I thought he was aware I was there, but maybe he didn’t look in the mirror before turning in.”

Both drivers were called to the stewards who later issued a statement that said Bottas had “acknowledged that it was a failed attempt at an overtake which resulted in the collision.”

It was his first reprimand of the year.

Bottas started the weekend at Yas Marina on the back foot, an engine failure during the Brazilian Grand Prix forced his Mercedes team to replace PU-elements on the W10 which means he will start from the back of the grid in Abu Dhabi.

The team reported that “Bottas suffered Mercedes’ first mechanical failure since Austria 2018 at the Brazilian Grand Prix last time out, his Mercedes experiencing a sudden rise in oil consumption before he was forced to pull off the track.

“Following on from that, ahead of the final race of the year at Yas Marina, the call was made to replace internal combustion engine, turbocharger and MGU-H.