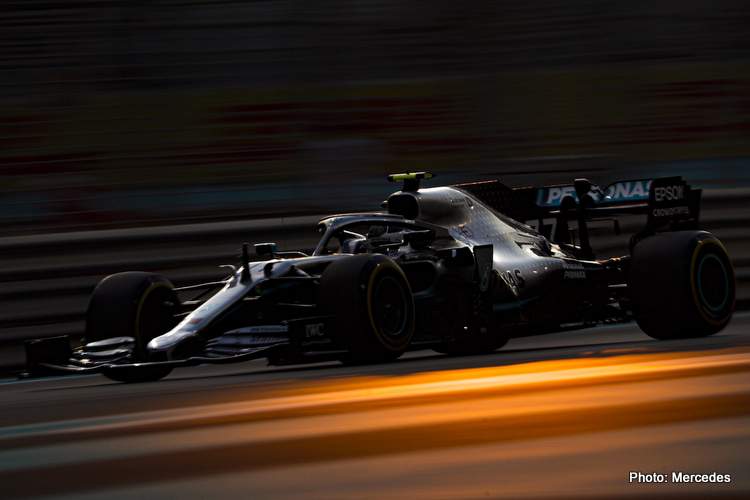 Valtteri Bottas topped the timing screens at the end of the second free practice session of the Abu Dhabi Grand Prix weekend, Round 21 of the 2019 Formula 1 World Championship, at Yas Marina Circuit in the United Arab Emirates – the final race of the season.

The Finn survived a collision with Haas driver Romain Grosjean during the 90-minute dusk session.

Bottas, who retired from the Brazilian Grand Prix last time out, was three tenths faster than his teammate Lewis Hamilton who was good for second place, on a day in which the Silver Arrows showed a tad more than their rivals.

Of which Ferrari’s Charles Leclerc was next best, in third and four-tenths shy of the top time, followed by Sebastian Vettel in the sister car, the German pranged his car when he lost control in the dying moments of FP1 earlier in the day. The pair were separated by a mere half-a-tenth on the timing screens

Interlagos winner Max Verstappen was fifth fastest, a little over half a second down on Bottas and four-tenths up on Alex Albon in the other Red Bull who was good for sixth.

Not long after the hour mark, in Turn 11, with Bottas on the inside and Grosjean turning left the silver car punted the black one.

Nevertheless, prior to the collision, Grosjean was Best of the Rest in seventh with Sergio Perez eighth in the Racing Point followed by Toro Rosso duo Daniil Kvyat and Pierre Gasly, ninth and tenth respectively.

Grosjean collides with Bottas as the Finn overtakes on the inside into Turn 11#AbuDhabiGP 🇦🇪 #F1 pic.twitter.com/IuqJLCTj00 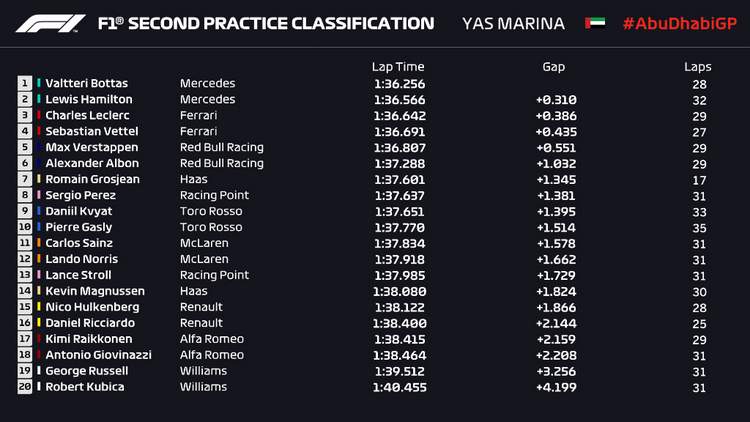