Binotto: Vettel and Leclerc are not in constant conflict 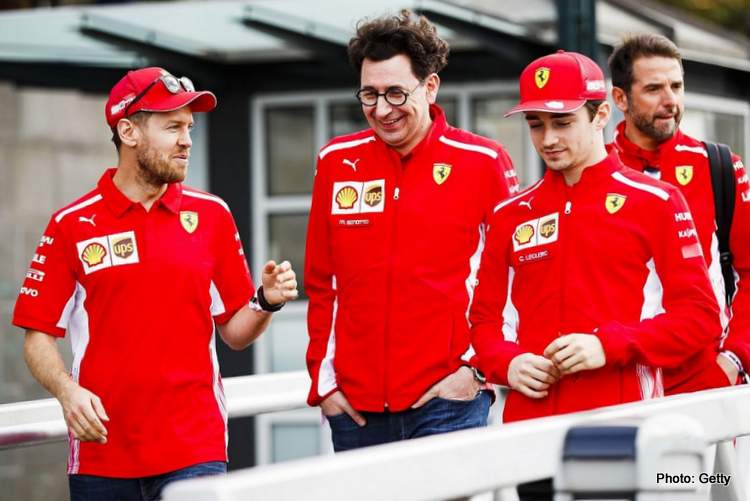 In the wake of the embarrassing collision during the Brazilian Grand Prix between his drivers, Ferrari F1 boss Mattia Binotto is going to great lengths to play down hints of a civil war at Maranello.

Although Binotto, as well as Ferrari’s chairman John Elkann, were openly angry after Sebastian Vettel and Charles Leclerc crashed into one another during the race at Interlagos, resulting in DNFs for both Red cars.

It was just the culmination of a season that has been reported by the media as a battle for number one status between veteran Vettel and young gun Leclerc at the sport’s most famous team.

But, ahead of the season finale in Abu Dhabi, Binotto insists that behind closed doors the pair are working in harmony despite their on-track altercations suggesting the opposite.

Binotto told Speed Week, “The truth is that the two of them get on well together. It’s not like you read or you hear. People might think they are in constant conflict, but it’s not true.”

A flare-up at the start of the Russian Grand Prix, whereafter Leclerc accused Vettel of reneging on a pre-race agreement.

On the day, Leclerc provided a slipstream to help Vettel break free from the rest of the pack and, in turn, expected the #5 car to cede Turn 1, but that did not happen.

Instead, the German snatched the lead from his unsuspecting teammate as they dragged towards Turn 1 in the well-documented incident.

Binotto recalled, “I remember after the controversy in Russia, we were all together in a restaurant in Japan and we had a great time. They were in a good mood, picking up each other’s phones to see what the other had in their photos. They like to be together.”

And went on to add, “They’re good team players and team spirit is very important in order to get the best out of everyone. If anything, Ferrari’s feeling of solidarity has become even more pronounced this year, and that will pay off in 2020.”

A Ferrari spokesperson said this week that the “air is fully cleared” between the drivers after the Brazil crash.

Binotto confirms: “We got together after Brazil and talked, first right after the race and then again in Maranello. I think they understood that what happened in Interlagos is unacceptable. But we also have to look ahead.”

Big Question: How long will ‘harmony’ last between Seb and Charlie?