…is this German for: Love you Fernando but go play in the sand? 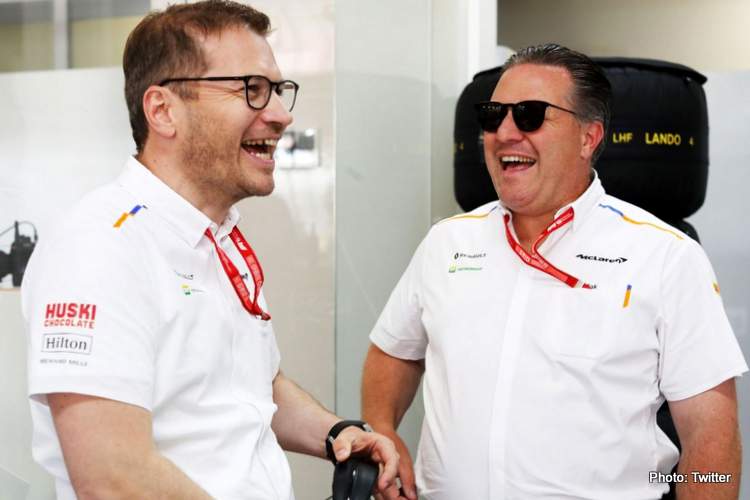 Despite Fernando Alonso’s departure, this year McLaren have emerged to become ‘Best of the Rest’ behind the sport’s top three outfits, with an all-new, very young driver line-up, who have been the revelation of the season and allowed to work out of the shadow of the great Spaniard.

Team boss Andreas Seidl told AS that McLaren are delighted to have scooped up Sainz’s services despite the 25-year-old being released by both Red Bull and Renault, “It’s difficult to judge from the outside the decisions a team makes, but the important thing for us is that he is part of our team.

“I am looking forward to many more years with him and I hope we can give him the car and the team with which he can fight for top positions.”

Seidl said it is “absolutely” his intention to stick with both Sainz and Lando Norris for the future, even beyond the end of their 2020 contracts, “With how Carlos and Lando are performing this season, we have no reason to look elsewhere. The goal is that they grow and mature with us to be drivers of the highest level.”

Perhaps Seidl’s biggest achievement was dealing with ‘the elephant in the room’ or make that the ‘elephant at the MTC’ namely Fernando Alonso who had developed a strong relationship with team boss Zak Brown and, by insider accounts, called many of the shots during his tenure at Woking.

Since Seidl’s arrival, the ‘Alonso-factor’ has been noticeably low-key allowing the team to go about their business without the media frenzy and hype that surround the Spaniard when he sets foot in the F1 paddock.

It would have been an interesting time to be a fly-on-the-wall when Seidl gathered Brown and Alonso for that discussion if indeed it did happen that way. Whatever the case, the double F1 World Champion did not test this year’s car as was being suggested late last year and his visits to races infrequent – great fodder for a Netflix episode.

Seidl said of Alonso, “He has been a member of the team for a long time and there are many people who have a very close relationship with him, especially Zak.”

“I know Fernando from the past, when we had conversations about him driving for Porsche at Le Mans I think in 2014 or 2015. I have a lot of respect for what he has done in the past and what he continues to do.

“I like to see him competing in different championships and showing how good a driver he is,” added Seidl which might be German for: we love you Fernando but go play in the sand…