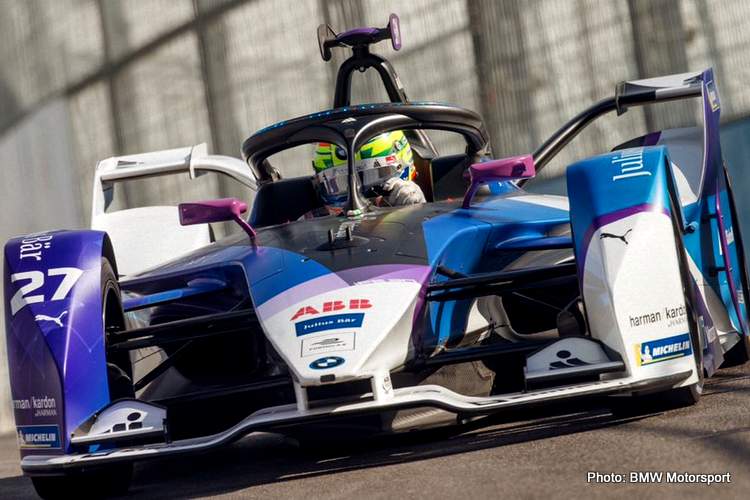 Alexander Sims took the first Formula E victory of his career on Saturday after leading a BMW Andretti one-two in the second of two races in Saudi Arabia.

The victory also made it a British double at the Diriyah ePrix, with Envision Virgin Racing’s Sam Bird winning Friday’s season-opener.

Bird was unable to carry the momentum, crashing out with 27 minutes remaining after a tangle with Jaguar’s Mitch Evans, and slipped to third in the overall standings and a point behind Mercedes driver Stoffel Vandoorne.

Max Guenther finished second in Saturday’s race with Lucas di Grassi third for the Audi Sport ABT team, according to provisional results.

Guenther was under investigation for overtaking during a safety car period, however, and could be stripped of the podium placing. If so, Vandoorne would take third place to make it two podiums in two races for debutants Mercedes.

DS Techeetah’s reigning champion Jean-Eric Vergne failed to score for the second race in a row, ending up 11th after dropping to the back of the grid with a 20-place penalty for a battery change. He had retired on Friday.

“That was pretty much a dream race,” said Sims, who started the race from pole position — his third in a row. “We seemed to execute everything really well, made the right decisions at the right times. It just all went smoothly today.

“Crossing that line was an amazing feeling. All of last season and yesterday, I feel there’s so many lessons that we’ve learned. They’ve stuck with me through the tough times last year and now to deliver a win is pretty cool,” added the bespectacled 31-year-old.

Bird was squeezed into the wall by New Zealander Evans, with a nudge from Mahindra’s Pascal Wehrlein, while running in fifth place. Evans collected a drive-through penalty for causing a collision.

The safety car was also deployed when Virgin Racing’s Robin Frijns hit the wall, with the race restarting while marshals were still removing the car and leading to full course yellow flags being waved.

Porsche’s Andre Lotterer, second on Friday, was demoted from sixth to 16th post-race for overtaking during the second safety car period.