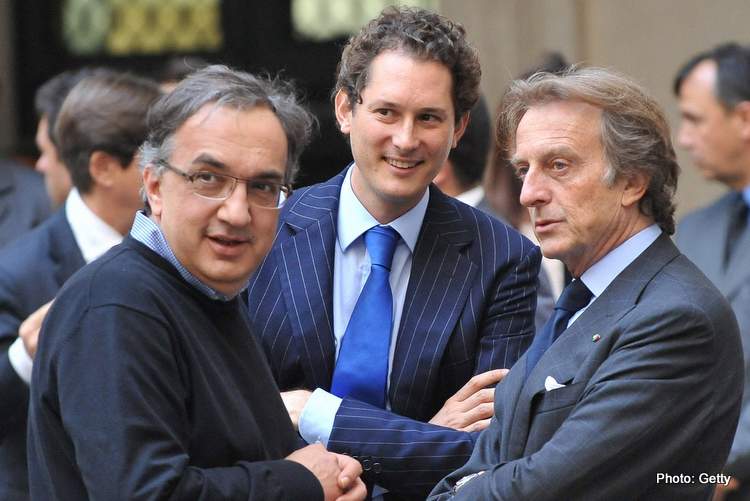 Nepotism is a funny thing. When someone makes it big, somewhere along the line someone will need to take the reins — such is life, no matter how good, how rich or how clever you are, we are still all going to die.

And the show will go on.

Trouble is, us humans are sometimes not all that clever — we look after our own and that is not always a good thing. Show me a scion who has really made good? There must be four or five I know of who took something big and made it even bigger. Now hold that thought.

As reported on GP247 earlier, John Elkann is Ferrari’s chairman, among several other hats he wears including chairman of Fiat and half of Italy’s media.

Now John is ‘very angry’ with his drivers after the Brazilian Grand Prix. You too, mate?

“What happened makes us understand how important Ferrari is,” Elkann told ANSA. “The drivers, no matter how good they are, must not forget they are Ferrari drivers.” Can’t argue with that.

“Teamwork is important as the only thing that matters is that Ferrari wins.” John goes on to explain that. “It has been an extraordinary season for pole positions, but they have not been converted into victories.”

None of that is news. We all knew that Sunday night already. And quite honestly mate, the buck stops with you — should we not be asking you why that conversion rate is so disappointing?

Anyway, getting back to our scion, New York-born Italo-American John Elkann is former Fiat boss Gianni Agnelli’s grandson and he has quite a pedigree beyond that too.

The son of a journalist, John went to school in England and France before graduating in management engineering in Turin and his international upbringing sees him fluent in four languages, good enough to see him chosen by grandfather Gianni to take over and he was appointed to the Fiat board at 21 in 2000.

Today Elkann is also Chairman of Ferrari, Vice Chairman of Gruppo Editoriale and board member of The Economist Group and is married to aristocrat Donna Lavinia Borromeo. They have three children.

As scion and philanthropist, Elkann has done pretty well, but he does wear a few hats. And while he is clearly a fan of Formula 1, his diversity keeps him busy on all fronts. Elkann appointed Ferrari CEO Louis Camilleri and Scuderia Ferrari team boss Mattea Binnotto shortly after Sergio Marchionne’s untimely death last year.

While some say Marchionne’s death shook the establishment to the detriment of Ferrari’s on-track performance, others quite correctly argue that by now, the team should be over all that.

And like all tifosi, I too want to know why what went down in Brazil, did.

I mention Luca Cordero di Montezemolo a few lines up. Lawyer Luca was pretty much Enzo Ferrari’s chosen son and rose from being the Scuderia’s Lauda era team manager to running the Fiat empire until ousted in Marchionne’s palace revolt.

Montezemolo also created the Schumacher Superteam led Ferrari to fourteen Formula 1 world championships. There have been none since his ousting. So he has pretty solid insight into affairs Ferrari.

“I struggle to imagine the dismay of millions of Ferrari fans around the world,” Montezemolo told Italian journalist Leo Turrini this week. “It is also my dismay. “I feared it would happen, but this is nothing new — difficulties between Ferrari pilots have often happened before. “It happened with me and we dealt with it in the Ferrari way.

“Those of us who have led the Red Army have always been aware that it is a great honour to do so — it was always our duty to remind our drivers where they are and what they represent.

“When I was young, poor Regazzoni came to Drake (Enzo Ferrari) to complain about Lauda. “Later on in my time, Irvine and Barrichello challenged Schumi’s supremacy.

“The Scuderia’s interest always comes first — I told my drivers to challenge on the track, but we did not allow them to damage the company like this — never. And my drivers always listened.”

“Of course, if it were up to me, I’d say the same to Vettel and Leclerc and while I will not judge from the outside, it seems that Sebastian and Carletto do not have this awareness, this respect for the team.”

Montezemolo then makes another, most pertinent observation: “I could perhaps understand, but I would never justify an episode like what went down on Sunday, if there was victory at stake. “But for a minor place at the risk of all those points, the championship positions…? ”

Discussing a solution to the Ferrari casino, Montezemolo concluded: “I hired Mattea Binotto at Ferrari and I trust his work, so perhaps a figure like the great Lauda did for Toto Wolff in Mercedes would help him, but that’s another story.”

Of course, Luca Cordero di Montezemolo came out of Formula 1 and went on to great things at Fiat. John Elkann, on the other hand, is a Fiat man and through and through a damn good one for a scion. But is he not wearing a couple of hats too many to give Scuderia Ferrari the attention it deserves?

Is it not time for him to scratch through those many hats, find the Scuderia Ferrari one and place it on the bare head of someone who has only the concern of the team and the millions of us Tifosi of heart?

And save us all from waiting another 21 years between titles, whatever ever it takes. It’s in your hands, sir…

Big Question: Is John Elkann the man to return Ferrari to F1 glory?