Hamilton: I never got into it for money 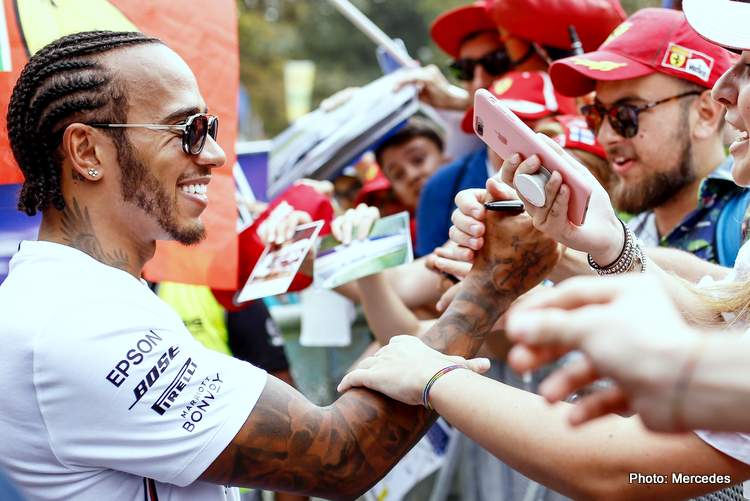 Six-time Formula 1 World Champion Lewis Hamilton has opened up in a massive and definitive season-ending interview with BBC’s Andrew Benson.

The 34-year old Briton is rapidly becoming the most successful driver in the history of the sport – Michael Schumacher’s extraordinary records are finally tangible.

Hamilton, also the highest earner in the history of the sport and reportedly on $40-million-plus a year from Mercedes, started by insisting, “I never got into it for money. Of course, it is great that it piles up – no problem. That is a bonus. As long as those things don’t become the lead factor of what I do.

“The core of what I do is that I love racing. I love the challenge. I love arriving knowing I have got these incredibly talented youngsters who are trying to beat me and outperform me, outsmart me, and I love that battle that I get into every single year.

“And I am working with these guys [Mercedes] who are so much smarter than me and they make me feel smarter. When I am challenging them and proving them wrong so many times, it is unreal.”

On the dark side, death visited the F1 circus at Spa-Francorchamps when Anthoine Hubert was killed in a horrific crash during the Formula 2 support race in September.

Hamilton recalled, “It wasn’t the first time I’ve seen that happen in my career.

“I remember quite vividly when I was young [8] I won this race in Kimbolton and Daniel Spence died and that was a tragic time for me as a kid, the first time I had known someone to die. And I was just with him that day.

“That was a tough one. This one, I was doing an interview and I saw it happen out of the corner of my eye and I just knew it was [bad]. And lots of things flashed through my mind. I remember watching Ayrton when he watched Ratzenberger crash and seeing his face. There was a lot of deja vu in that experience.

“A lot of thoughts went through my mind in the evening. I worried about the kid. I know what it’s like to be in F2 and having the dream of being somewhere. I thought to myself: The cars are still unsafe. Particularly lower down the ranks, it’s probably even less safe than it is for us.

“I’m sure when it comes to your last day – I like to think you’re at the pearly gates – you’re looking back on your life, you’re never asking: I wish I had more money. You always wish you had more time. And you probably have a ton of regrets: If only I’d made that decision on that day, I could have spent more time with my loved one. Or whatever it is.

“All those things were going through my mind but there was never a second I thought I wasn’t going to keep racing. The fear factor never crept in. That was an important factor for me.

“I remember when that kid died, when I was eight, one of my best friends at the time quit racing. Fear crept into him and he just quit. For me, I was like, if that ever creeps into me, I know that’s the last legs of my career.”

In the 12 years since he broke onto the F1 scene, Hamilton has been no stranger to controversy, which he tends to court – intentionally or not – on social media. Over the years the Briton has developed his presence online through Instagram and to a lesser extent Twitter and Facebook.

But it appears to be a love-hate relationship as he has, more than once, found himself in hot water for politically incorrect posts while heartfelt declarations about saving the world, inspiration memes and insights into his life are common.

Most recently the World Champion caused consternation when he declared that his “life had no meaning” which again caused a buzz online.

“Most of the time, I wear my heart on my sleeve,” explained Hamilton. “It was an emotional post, which is not always good to do. It just felt like I was banging my head against the wall and not gaining ground.

“There is a lot of push-back on a lot of things I do, and a lot of questioning of everything I do and say. You live your life under a magnifying glass. And the pressure for anyone that’s in the limelight… we’re only human, so at some stage you’re going to buckle a little bit.

“But I always say it’s not how you fall, it’s how you get back up. And I really turned that negativity into a positive and came back and won that next race. And you’ll probably see if you look back in the history of the times I’ve often had those difficult phases, I’ve often won the next races. That’s where my strength lies.”

His other strength is no doubt his ability to juggle his busy social life, as well as his personal projects, with delivering at the highest level on-track on given Sundays.

But the importance of life-balance does not escape the vegan, “I would say just the energy load, there is a lot; I have to take a lot of weight. I don’t go to the races and just go home, all week just training, which would be so much easier.

“I have so many commitments. And I would say that in many areas that’s a strength but if I’m not careful that can easily tip over and be a weakness. I am constantly monitoring that. I run a tight ship with [close freind] Marc [Hynes] and my guys. I don’t plan to be the easiest person to work with. I tell you how it is.

“And if I ever feel that I need to back away, I’ve got people around me who [are supportive]. Like [last] Monday, for example, I was, like: Bono, I can’t be there Monday but let’s catch up on Tuesday because I’m overloaded. I need to sleep. It’s about understanding your body and making sure you stay centred.”

While Schumacher’s majestic records are now realistic targets, it remains a fact that Hamilton is closer to the sunset of his career than the sunrise in 2007.

Nevertheless, talk of him quitting is well premature as he explained, “I don’t fear it. Naturally for athletes, it has to be the saddest day, to hang up and stop doing something you’ve loved your whole life and as long as you can remember.

“But that is why I have all these other things in place that I can fall back on. The fashion side, for example. I’ve found another business that I can do for a long time if successful. Currently that is going really, really well but I don’t know how long it will go.

“But at least I have another interest. There are a lot of different things I can be interested in. I know my life is not going to be over when I retire. And that gives me a lot of comfort.

“But right now I feel physically good enough to continue so I’m going to try to eke that out as long as I can,” concluded Hamilton who will be hunting his 84th Grand Prix victory when he lines up on the grid for the 2019 season finale in Abu Dhabi on 1 December.