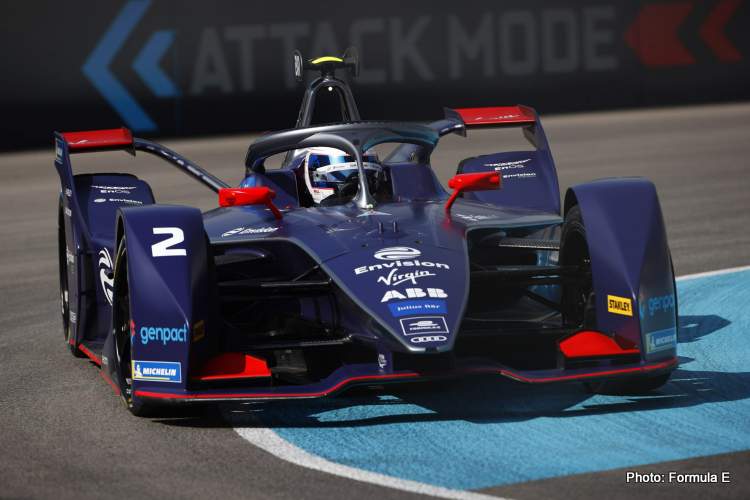 Sam Bird won the opening race of the Formula E season in Saudi Arabia for Envision Virgin Racing on Friday, with series debutants Porsche and Mercedes making immediate appearances on the podium.

The 32-year-old fought through from fifth at the start to continue his record of winning in every season of the all-electric championship dating back to the first in 2014/15.

The win was also Bird’s ninth in Formula E, the third most of any driver.

Andre Lotterer finished second for the Porsche team with Stoffel Vandoorne taking third place driving fpr Mercedes. On the day, both manufacturers making their debut in the electric series.

The Diriyah circuit hosts a second round on Saturday. 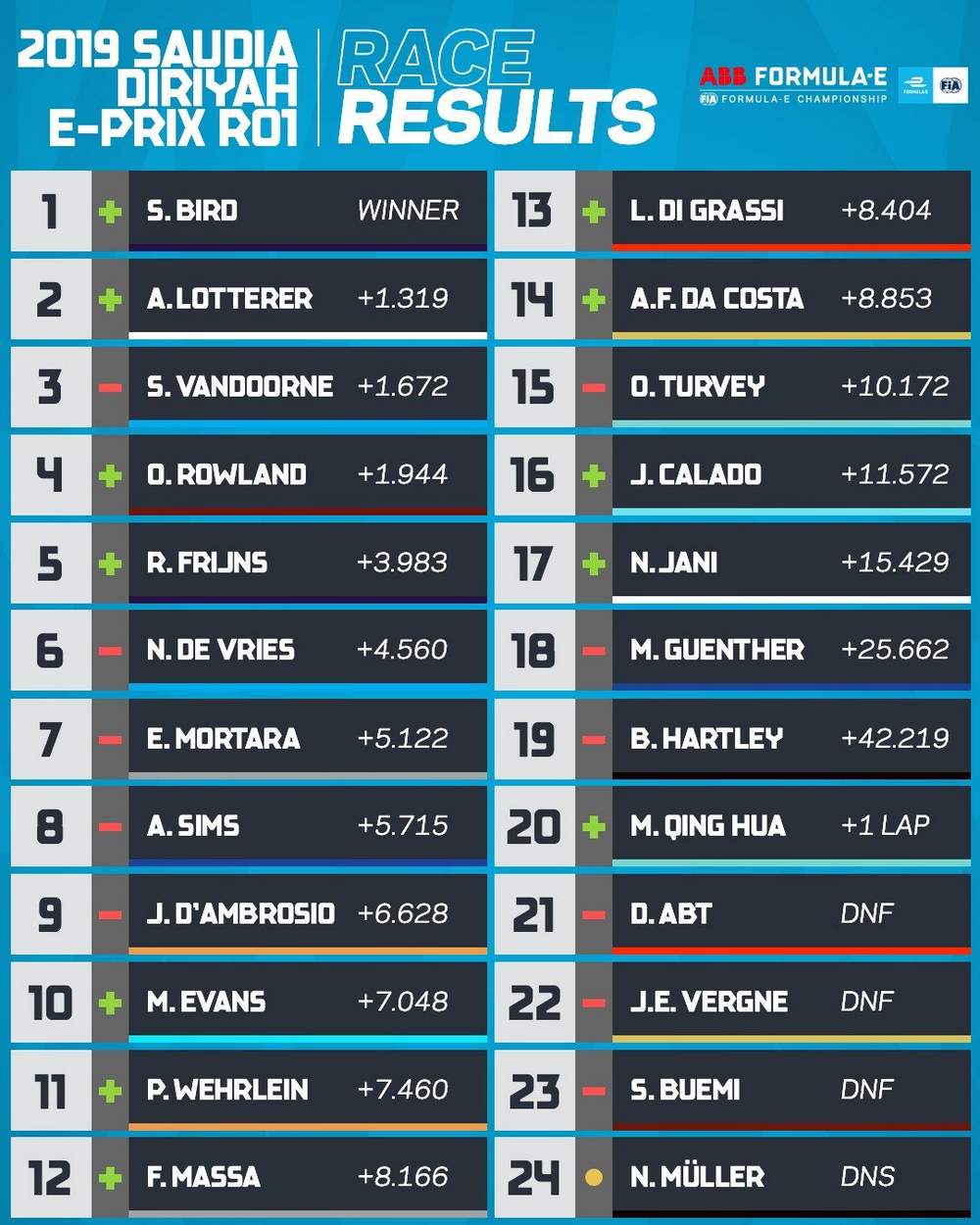 Official Formula E from Round 1 in Diriyah:

Starting on Pole, BMW i Andretti Motorsport’s Alex Sims pulled away as the lights went out on the season opener in Saudi Arabia, leaving both Mercedes-Benz EQ drivers Stoffel Vandoorne and Nyck de Vries in second and third.

Just five minutes into the race, problems struck for Nissan e.dams’ Sebastien Buemi who stopped on track while the grid passed by. Unable to restart his car, the Swiss driver retired from the race.

After a number of attempts from Envision Virgin Racing’s Sam Bird to pass Rokit Venturi Racing’s Edoardo Mortara and move towards a podium finish, the Brit passed the Swiss driver with 30 minutes left on the clock.

Moving up from 16, Audi Sport Abt Schaeffler’s Daniel Abt passed NIO 333’s Oliver Turvey in a bid to improve the German manufacturers start to the season. Moments later, Mahindra Racing’s Pascal Wehrlein (in 12th) clocked the fastest lap.

Still locked into 11th, reigning champion and DS Techeetah driver Jean-Eric Vergne showed no sign of making his way into the points. With two titles to his name, the pressure is on for the Frenchman as he looks to clinch a third at the end of the 2019/20 season.

Leading the way, Alex Sims kept the two Mercedes drivers at bay in his BWM as the German powerhouses battled for the win. Close behind was Sam Bird in his Audi-powered Envision Virgin Racing challenger, followed by TAG Heuer Porsche’s Andre Lotterer in fourth.

With 17 minutes left of the race, reigning champ Vergne retired, returning to the pits with damage to the front wheel of his car.

Coming off the start/finish straight, a patient Vandoorne made his move on race leader Sims, taking the lead through Turn 18 and 19. At the same time, Bird attacked, passing Sims to move into second. Dropping back further still, Lotterer moved into third, knocking Sims off a potential podium finish.

Not content with a second place finish, Bird attacked Vandoorne with ten minutes remaining. Taking the lead in his Audi-powered car, the Brit handed it to new entrants Mercedes and Porsche as Lotterer remained in third.

After working his way up the grid, Nissan e.dams’ Oliver Rowland advanced on Sims in fourth, passing the BMW driver with six minutes to spare. Coming into Turn 5, Audi’s Daniel Abt failed to stop his car after a collision with Antonio Felix da Costa (BMW) and was left stranded after colliding with the wall.

With only three minutes left, the BMW i8 Safety Car was deployed while the German’s car was collected until the race restarted with just over a minute to go.

Bird, maintaining his lead, held out to collect the first win of the season after a spectacular race from the Envision Virgin Racing driver. Trailing the Brit in his Audi was Porsche’s Andre Lotterer in second, followed by Mercedes’ Stoffel Vandoorne in third.