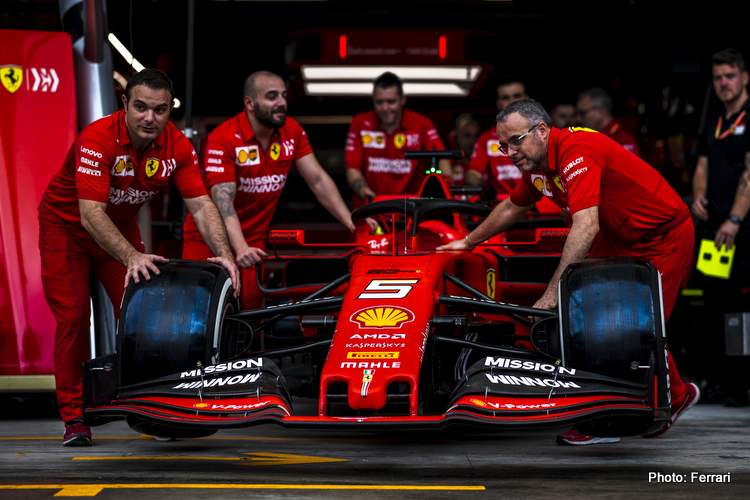 Amid rumours of technical trickery or even cheating, in the wake of the Brazilian Grand Prix, the FIA has seized the fuel-system on the Ferrari SF90 to determine if it conforms to Formula 1’s technical rules.

Also taken in for inspection was the fuel-system of customer team Haas and a third from Red Bull Racing.

This follows two technical directives issued in recent days that raised eyebrows about the power produced by Ferrari’s power unit, Speedweek reports that the FIA is going to study the layout of the fuel-system over the next days.

The report adds that “if FIA ​​engineers find something questionable then Ferrari has a lot of explaining to do” and will explain how the Italian team has had an edge with their PU package for most of this season.

While Red Bull made the noises, Mercedes supposedly provided the data to nail Ferrari but Toto Wolff deflected suggestions his team may have been the whistle-blowers.

He explained, “We don’t ask ourselves whether the Ferrari engine is legal or not. That’s not how we think. We don’t point our finger at other manufacturers.

“On the contrary, we ask ourselves: how can we do something better ourselves? Have we overlooked something? Do we get everything out of the engine? If our rivals are getting more power out of their PU, then we have to be able to do the same,” added Wolff.

Of course, the “cheating” allegations did not escape the ears of Ferrari team boss Mattia Binotto who told reporters, “I’ve heard some comments from opponents here about a technical directive and the alleged impact on our car. I am very disappointed by some comments.”

Binotto also took a swipe at Max Verstappen who had a lot to say when Ferrari pace went AWOL at the United States Grand Prix, “Such statements are wrong and not good for sports. Maybe some people should use their words a little more cautiously. ”

Meanwhile, the onus is on the FIA to once and for all clear the air over a matter that has been bubbling for several months and coming to head when Red Bull, apparently urged on by Mercedes, questioning the legality of the Ferrari.

The seizure and inspection – comparing the works system to the customer system – will go a long way to clarify an issue that could tarnish the Italian team’s impressive resurgence, in which for the first time since the turbo-hybrid era dawned, they have provided the most potent PU package and arguably the best car for their drivers in 2019.

Former F1 driver turned pundit Marc Surer told Bild, “Examining the Ferrari is the best thing the FIA can do. I think it’s really good, as these rumours must be stopped. We must not let the topic go into the winter break. If they find something, Ferrari has a problem.”