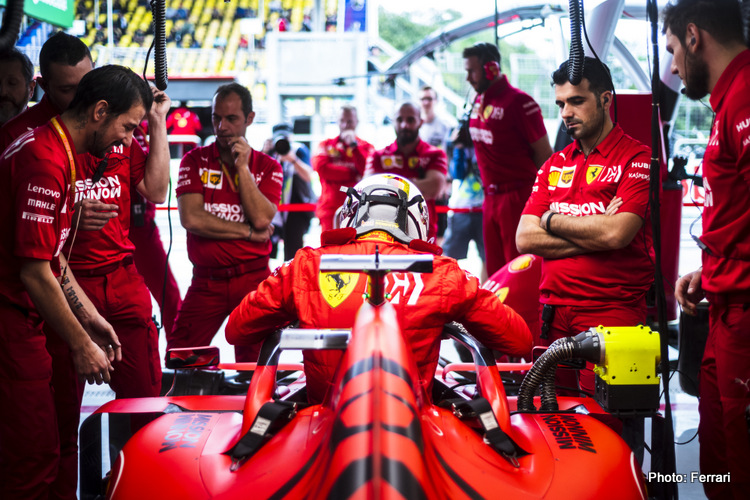 The constructor’s championship may be decided, but for its two leading protagonists, the past seven days have seen them offer plenty to talk about.

Ferrari Civil War Heats Up Again: Either a waking nightmare or the gift that keeps on giving, depending on where you’re sitting, Ferrari’s season of misery continued in Brazil as Sebastian Vettel and Charles Leclerc reignited their rivalry in the worst possible way, with an entirely avoidable collision that took them both out of the race.

Literally a day after the Scuderia celebrated their 90th anniversary, it’s hard to think of a worse possible way they could mark the milestone, but it also served as a timely reminder that allowing their drivers to battle simply isn’t the Ferrari way.

I mean sure, it’s great from a neutral’s perspective to see Vettel and Leclerc duke it out, and Mattia Binotto is at least publicly in support of the fight continuing, but when you consider the ethos this team has operated on throughout its history – from Fernando Alonso and Michael Schumacher, all the way back to Alberto Ascari – it would seem odd to let it continue into 2020.

Of course, that then raises the tough question of which driver should Mattia Binotto and co favour, especially considering neither is likely to take it well if they lose out.

As GP247 EIC Paul Velasco pointed out to me when we discussed this earlier in the week, back in the “old days” of F1, it was possible for drivers to come to “one year for me, one year for you” agreement over such a thing. In 1978, Ronnie Peterson and Mario Andretti had such an understanding at Lotus, with Ronnie knowing he was faster than Mario, but supporting his successful push for the driver’s championship under the condition the latter would return the favour in ’79. Unfortunately Ronnie was killed at the ’78 Italian GP before the plan could be completed, but with two drivers as capable as Vettel and Leclerc, it does offer something of a blueprint.

Then again, they might not go for it. There’s obviously no guarantee a car will be good enough two years running (the ’79 Lotus wasn’t), and with personal brands and legacies on the line, it would be a particularly tough sell in this day and age. Still, you could be sure the Ferrari of old would clamp stop this continuing regardless – I wonder if Binotto’s Scuderia is capable of doing the same.

… and so does the Engine Issue: A story that continues to simmer, as likely to erupt into full mania as it is to peter-out quietly, the legality of Ferrari’s power unit continues to be in question, with the latest chapter coming just a few hours ago.

Whereas after the quotes from Helmut Marko on the weekend seemed to indicate we would be waiting for Mercedes to lodge an official protest (which they haven’t), now Auto Motor und Sport is reporting the FIA has taken matters into their own hands and “confiscated” multiple Ferrari fuel systems for further examination.

Like everything else so far in this story, this could mean everything, or nothing. Certainly it would be bizarre if Ferrari have continued to ignore the FIA directives issued over the past couple of races regarding this matter – but if so, they it would seem they’re about to be caught out – or, it could just be a case of the governing body wanting to get a little more clarification. Either way though, it’s a distraction the Scuderia simply doesn’t need right now, and you have to wonder how it will impact their preparations for the 2020 seaosn.

Mercedes Quit Threat: Maybe it’s me just being in a state of denial, but I can’t believe that in the midst of the most dominant run this sport has ever seen, Mercedes are considering giving up their F1 team. Nevertheless, we were treated to a pretty crazy rumour over the weekend, with Roger Penske and Dmitry Mazepin reportedly lining up bids for the team.

Maybe if it was just Bernie Ecclestone talking his usual junk, I’d be less-inclined to take it seriously, but this was news which spread pretty fast through F1 circles, and I think that at the very least, the Silver Arrows are considering it. On the positive side, it was only last week Mercedes was trumpeting their relationship with F1, but this wouldn’t exactly be the first time a billion-dollar company put their profits ahead of sentiment.