#TheXtraLap: Verstappen doing what he does best 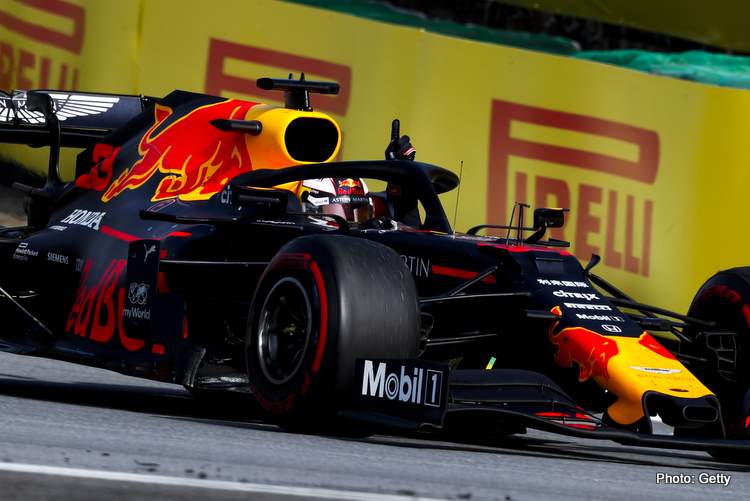 The penultimate race of the season and the expectations were that it could be between three teams, from Friday onwards Mercedes, Ferrari and Red Bull were very close together so that promised to be something.

On Saturday they all fought for a place on the grid and Max Verstappen took his second pole position, just before Sebastian Vettel and Lewis Hamilton. Charles Leclerc couldn’t get any further than fourth place while Valtteri Bottas couldn’t match his teammate and had to settle for fifth place.

Alexander Albon had already had a crash during free practice and this was his first time at Interlagos so his sixth place was just fine.

The surprises were behind it as Pierre Gasly put his Toro Rosso in 7th place with Romain Grosjean in 8th place, Kimi Raikkonen in 9th place and Kevin Magnussen in 10th place.
Because Charles Leclerc had a new engine, he was put back ten places so at the start Lando Norris came from tenths position.

The race turned out to be a beautiful one with very unexpected moments, including a Mercedes that dropped out and both Ferrari drivers who drove each other off the track into a retirement.

And who would have thought that a Toro Rosso and a McLaren would also finish on the podium? To explain the race, it will be a long story so check out the highlights here.

Does Mercedes no longer have their advantage?

Actually, since the summer break, Mercedes is no longer the dominant team. Ferrari has found a lot of speed somewhere, but also Red Bull has made big steps. I have the impression that, after 5 years of dominance, their total package is at the maximum of what is possible and that any improvements, doesn’t bring the desired big steps, but more the small differences. Honestly, even in the first season half, Mercedes was not always the dominant party, but by mistakes of others, they won anyway. With one more race to go, I don’t think there’s going to be much change.

A disappointing result for the Team in a turbulent #BrazilGP https://t.co/1SIiDEaKL9

Was it a missed opportunity for Ferrari?

Both Ferrari drivers were back in the game, even though they had less top speed than expected. During the race, it was clear that they would go for the places three, four or five after Valtteri Bottas dropped out with engine problems. Towards the end of the race, Sebastian Vettel and Charles Leclerc were behind Alexander Albon and it seemed as if Vettel was dropping a bit to get some more air for a new attack on Albon. Leclerc had other plans and passed Vettel. I don’t think Vettel was happy with that, so he tried to take his place back by overtaking Leclerc on the outside. This worked out quite well until both drivers got too close to each other and contact was “unavoidable”. Vettel’s left rear wheel hit Leclerc’s right front wheel and both tyres exploded, causing both drivers to drop out. It could have been a nice day for Ferrari and the drivers’ championship standings, but it wasn’t to be. After the race, both drivers had to join the stewards, but they decided not to hand out penalties because both drivers were equally responsible for the accident.

Since a few races, Red Bull is on top of it and is equal to both Ferrari and Mercedes. The Honda engine performs very well and is extremely reliable, but also Red Bull itself has made good steps. After the introduction of the new front wing, the car seems more stable and especially Max Verstappen can do more with the car than before. Alexander Albon often makes mistakes and crashes during free practice, but during the races, he is also in good shape. During the Brazilian Grand Prix, Verstappen showed why many people praise him highly because it was a real race as we fans like to see it. Fighting on the track and not during pit stops. With the same strategy as Mercedes had with Lewis Hamilton, Verstappen had an answer each time and he even passed Hamilton, not once, but twice on the track which indicated that Verstappen had this race in his pocket. Albon also stood his ground as he was aggressive in his attacking and defensive actions. Unfortunately Hamilton knocked him off the track, but otherwise, he could have made it to the podium as well.

There was no stopping @Max33Verstappen in Brazil this time!

Who was best of the rest?

After the loss of Valtteri Bottas, Sebastian Vettel, Charles Leclerc and the loss of Alexander Albon thanks to lewis Hamilton (who would get a time penalty), it was difficult to determine who was best of the rest. Sure, Pierre Gasly finishing second is unbelievable. But Carlos Sainz in third place was also totally unexpected. And what about a fourth place for Kimi Raikkonen and a fifth place for Antonio Giovinazzi? Each and everyone worth mentioning. So this time I’m not going to go for who was best, but I want to mention them all because they all deserved it.

WOOOOW, 2nd!!!!!!
I’m just lost for words… simply incredible day!! Just wanna THANKS each single person that helped and supported me since day 1 to live this moment and emotions, best day of my life. Thinking about you Anthoine, that one is for you my friend. pic.twitter.com/ML8e8Ht0pR

From P20 to P3!!
I have never expected my first @F1 podium to be like this. I am extremely happy! Thank you to the whole @McLarenF1 team & everyone involved!!@EG00 #carlossainz #Smoothoperator pic.twitter.com/WOvF82VLHM

Kimi “It’s great to finally be able to celebrate our best result of the season as a team. It was a positive day and finally we were able to get the result we worked so hard for.”

Was it busy on social media?
Busy? It was unbelievable. The start, the contact between Daniel Ricciardo and Kevin Magnussen, the 1.9 second pit stop of Red Bull, the coming together of Robert Kubica and Max Verstappen in the pit lane, the contact between Lewis Hamilton and Alexander Albon, the DNF of Valtteri Bottas, that both Ferrari drivers drove each other out of the race, the fight between Lewis Hamilton and Max Verstappen, of course the podiums for Pierre Gasly and Carlos Sainz, but also the long period of time that the stewards needed for all penalties. It was a madhouse on social media, but oh so awesome to follow.

What’s next?
There is no F1 this weekend and because many racing classes have already ended, it is a weekend of beginning and end. FormulaE will start its season while the Australian Supercars will have their last two races. All timetables and more are of course already available on the website of MsportXtra.

#RACEWEEK !! A weekend with two faces. It’s the beginning of the @FIAFormulaE season but also the end of the @supercars season. All timetables and more are on https://t.co/PTXuV86Ylx !! #MsportXtra