Ferrari: Shame we threw away so many points 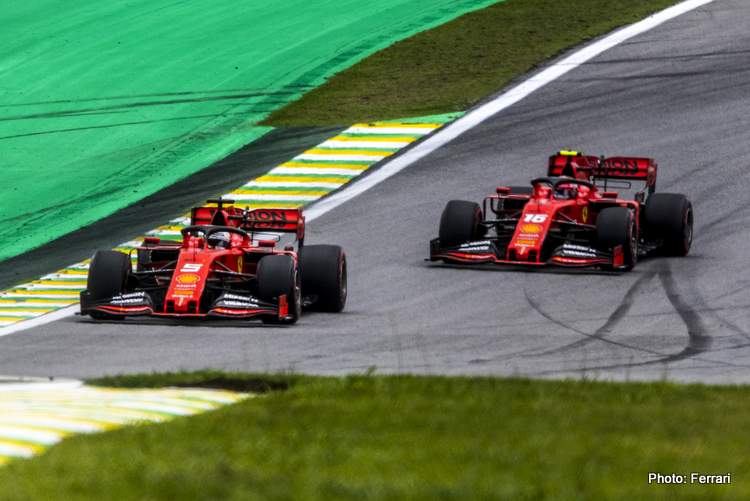 Scuderia Ferrari leaves Brazil with the worst possible result: no points following a collision between Sebastian Vettel and Charles Leclerc, which led to both of them having to retire from the race, after they had both been front runners right up the final laps.

Start. Sebastian was on the dirty side of the track and got wheelspin when the lights went out, so that he was passed at turn 1 by Lewis Hamilton. Starting 14th, Charles got away well, immediately passing Nico Hulkenberg and over the opening seven laps he pulled off a series of incredible overtaking moves to pass Daniel Ricciardo, Lando Norris, Antonio Giovinazzi, Kevin Magnussen, Romain Grosjean and Kimi Raikkonen, before setting off in pursuit of Alex Albon in the second Red Bull.

First stop. When Max Verstappen and Hamilton made their first stops to fit soft tyres, Sebastian stayed out until lap 25, when he took on medium tyres. Charles kept going until lap 29, pitting for a set of Hards. At that point the order was Verstappen, Hamilton, Sebastian, Bottas, Albon and Charles.

Safety Car. Bottas made a second stop on lap 41 going from Hards to Mediums, which promoted Leclerc to fifth. The Finn closed on him rapidly, trying several times to get past, but Charles defended well. But then Bottas’ car, on lap 51, had a problem and he had to park it trackside, which brought out the Safety Car. Sebastian, who had pitted on lap 49 for Softs, stayed out, given that he had no more sets of new tyres, while Charles stopped for new Softs.

Lap 66. At the restart, Hamilton led from Verstappen, Vettel, Albon and Charles: at turn 1, Albon managed to pass Sebastian who tucked in behind the Thai. At the same time, Charles closed right up to his team-mate and passed Seb for fourth place at turn 1 on lap 66. Vettel got a better exit in the second part of the Senna Esses and chased after Charles, trying to take the place back. However, it resulted in the two men colliding on the straight and it spelt the end of the race for both of them. The race was won by Verstappen. The next round, the last of the season, is the Abu Dhabi Grand Prix which takes place on Sunday 1 December.

DNF. Sebastian Vettel: “The summary of the day is that we did not finish a race in which we could have got a good result. It’s a shame about the collision between us, especially for the team as a whole, given that both cars were in the points and considering how much work everyone puts in, both at the track and back in Maranello.

“From my point of view, the race was going well, even if I think that Max (Verstappen) was uncatchable today. Now we must just focus on the final race of the season where will try and bring home the best possible result.”

DNF. Charles Leclerc: “It’s a real pity to end the weekend like this. I am sorry for the whole team, especially because today we were fast and we were looking good to bring home some decent points.
It had actually been an exciting race for me. Starting from the midfield, I enjoyed fighting my way forward and was satisfied with the way things were progressing.
We will move on from this in any case and continue to work together in the best way. Now it’s time for us to focus on Abu Dhabi to end our season in the best possible way.” quote

Mattia Binotto, Team Principal: “The overriding feeling today is that everyone, first and foremost our drivers are very disappointed and sorry from a team perspective. It was a small collision that had a big consequence. In truth, this sort of thing should never happen. Our drivers were free to race today and they knew that. We have already clinched second place in the Constructors’ Championship and they were battling for their own positions in the Drivers’ classification.
Of course we now need to sit down and decide together where the limits are to make sure we all push for the benefit of the team and make sure these things don’t happen anymore.

“Our race today was certainly not bad, and similar to Mexico in terms of performance. We are still lacking a bit of pace in the race. Sebastian was in a comfortable fourth, Charles from 14th could have been on the podium. It’s such a shame that we ended up throwing away so many points.