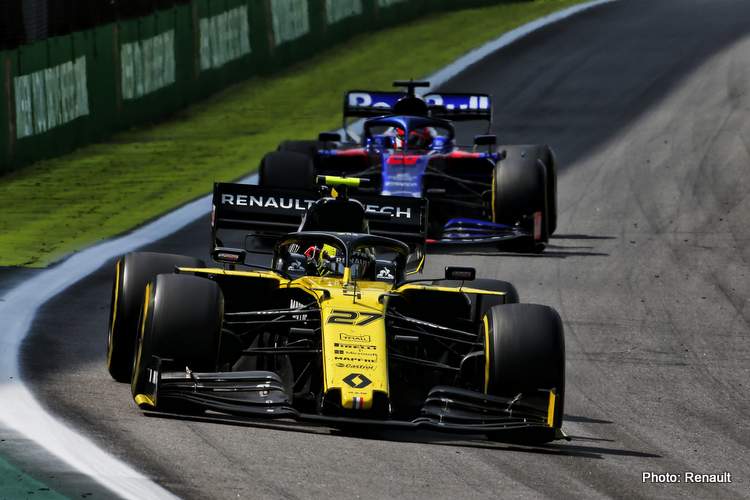 Renault F1 Team’s Daniel Ricciardo made a strong recovery in a frenetic Brazilian Grand Prix to finish in seventh place at Interlagos.

Daniel had to overcome both a front wing change and a five-second stop and go penalty during a chaotic race, where he fell to the back of the pack after an early collision with Haas’ Kevin Magnussen.

Nico Hülkenberg received a separate five-second penalty for an infringement under the safety car, which meant he was demoted to fifteenth place after finishing twelfth at the flag.

Daniel suffered front wing damage after attempting an overtake on Magnussen at Turn 4 early on in the race. A slick 10-second pit-stop, including the wing change, meant Daniel languished in twentieth place and seemingly with little hope of breaking into the points.

He was given a five-second penalty for his involvement in the incident, which was added to his second pit-stop on lap 40.

However, two safety cars during the final 16 laps saw Daniel progress his way up the order: climbing to tenth after the first restart and then – with both Ferrari’s retirements – to seventh after the second restart.

Daniel was promoted to sixth after post-race penalties were applied.

The team remains fifth in the Constructors’ Championship on 91 points.

P16. Nico Hülkenberg: “I don’t really know what happened today and I just couldn’t seem to make progress in the race. There was some excitement at the end with the safety cars and the restarts. It was fun with some battling, but it just wasn’t happening for me today. It shows how important qualifying is to be right up there and being in a position to gain places.”

P7. Daniel Ricciardo: “After the early incident, I would have said ‘no way we could finish seventh’, so I’m quite happy with that. I take responsibility for the incident with Kevin. It was close, but I went into him and he spun. Sometimes you can do that and it works, but sometimes you touch wheels. In that situation you think the race is over, but we kept our heads down and managed a really strong race. The safety car restarts were fun and it was good out there. There’s one more to go now and I’m excited for that.”

Cyril Abiteboul, Team Principal: “In view of our less than optimal starting positions on a track that really doesn’t suit us, we once again had to go for a bold strategy. This time it didn’t pay off, in stark contrast to previous races. After a difficult start on medium tyres both our drivers were pitched against cars on soft tyres.

“The collision with Magnussen and the ensuing penalty effectively excluded Daniel from a race that could have been better for him, especially with a bit of patience at the beginning of the race. He nonetheless showed resilience even when racing in last place, right until the events at the end of the race that allowed him to climb back up the order.

“Unfortunately, these events also helped our rivals. We must absolutely avoid putting ourselves in this situation at the last race in Abu Dhabi.”