Red Bull: One objective today and that was to win 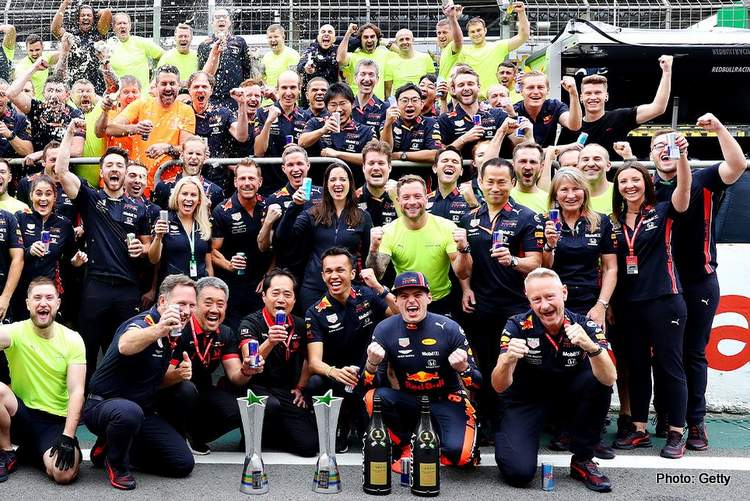 Max Verstappen scored his third win of the season, the eighth of his career and the Team’s 62nd victory with a superbly controlled drive to the top step of the podium at the end of a hugely dramatic Brazilian Grand Prix.

There was heartbreak for Alex Albon, though, as he was denied second place when he was hit by Lewis Hamilton just two laps from the flag.

P1. Max Verstappen: “It’s an incredible feeling right now and to win today was a huge Team effort. It was a crazy race with a lot of action and fighting but luckily we always had the pace to counter back and overtake Mercedes in every scenario.

“It wasn’t easy out there but the Team made all the right calls, especially at the end to pit for the soft tyres during the Safety Car which gave us the win today. As a Team you always try and make everything perfect, I focus on my job and the Team also try to do a perfect job in the pits and on the strategy and clearly today it worked out pretty perfectly.

“It’s a great victory, after last year of course, but more for the way the race unfolded and how we all had to work together. Today and the whole weekend the car and Honda power unit have been working really well and we have made a step so thank you to everyone for that.

“It is of course a massive shame that Alex could not be on the podium with me as it would have been an even better result for the Team but it’s great for Pierre to be up here and for Toro Rosso and Honda.”

P14. Alex Albon: “Of course I’m frustrated but I’m not angry, I’m just upset. I wanted that podium and we deserved it as it was on merit. At the Safety Car restart we had some fun and I enjoyed battling with the Ferraris, the overtake felt good!

“Obviously Lewis had good grip once he pitted and I think he would’ve got me eventually into Turn 1, but I thought worst case scenario we had P3. I had a good gap to Lewis and I wasn’t worrying about him. I went into the corner deep just to cover him so he didn’t get any ideas, and then there’s a blind spot and obviously we made contact.

“Of course he didn’t do it on purpose, it’s just one of those things and today wasn’t meant to be. It’s done now and we’ll focus on the positives before the next race. Congratulations also to Max, he drove really well and deserved the win.”

Christian Horner, Team Principal: “That was redemption for Max. We went into the race with one objective today and that was to win. From the moment the lights went out, Max stormed into the lead and controlled the race brilliantly.

“Lewis pitted just before us and committed to a two-stop, then an unsafe release with the Williams cost Max the lead, but taking full advantage of his new tyres he immediately repassed Lewis. Thereafter Max controlled the race and the mechanics did a phenomenal job to turn the car around in 1.9s at the final pit stop.

“When the Safety Car came out we had the horrible decision of whether to pit from the lead, knowing the car behind would stay out. Our strategist Hannah made the recommendation to pit so we did and Max was once again able to repass Lewis. Alex drove another very strong race, going wheel to wheel with Ferrari and Mercedes. He managed to pass Sebastian on the outside of Turn 1 and was also able to get ahead of Lewis who pitted at the final Safety Car.

“Unfortunately on the last lap, Lewis went for a gap that was rapidly diminishing and contact was made. That was a 1-2 finish for the Team and second place for Alex taken away, but nonetheless Alex has driven a great Grand Prix and he can leave Brazil with his head held high.

“Finally, congratulations to Pierre who delivered a very strong weekend and it’s great to see him on the podium for the first time. Overall, it’s been a really positive weekend for both Red Bull teams and Honda.”