Racing Point: A tough day for us 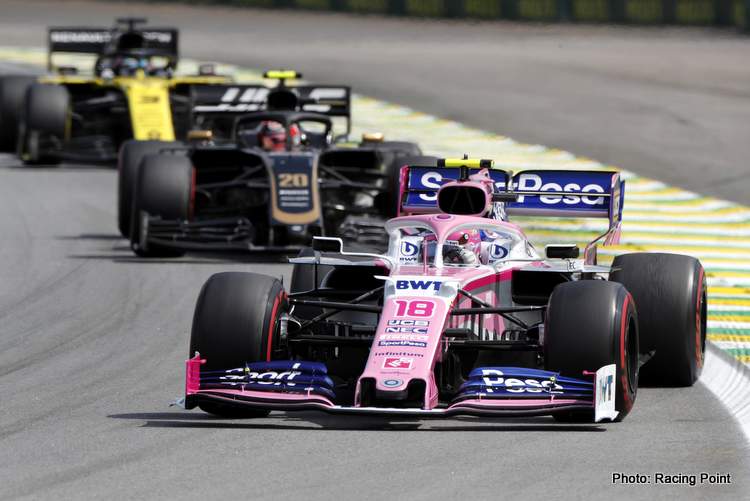 Racing Point report from the Brazilian Grand Prix, Round 20 of the 2019 Formula 1 World Championship, at Autódromo José Carlos Pace in Interlagos, Sao Paulo.

P9. Sergio Perez: “It was a very chaotic race – especially the final ten laps when the Safety Car brought all the cars together again. Unfortunately, it was difficult for us to really fight out there today because we lacked speed on the straights, which meant that we got overtaken easily and couldn’t fight back. In the end, our two points are really deserved and I’m pleased we came away with something. Unfortunately, we couldn’t fight for higher positions.”

DNF. Lance Stroll: “There’s not much to say today: it was a really disappointing afternoon. I ran over some debris from the Ferrari incident and that was it, my race was over. It had been a really close race up until then and the Safety Car really mixed things up and changed the race for everybody. It’s a shame because up until then I was on a one-stop strategy, my tyres were performing well, and we were definitely in a position to grab some points today.”

Otmar Szafnauer, Team Principal: “A tough day for us, even though we managed to salvage a couple of points in the final few laps. Before the Safety Car came out, we had both cars on different strategies with Lance doing a good job to make the one-stop race work. It looked as though he would score points, but we switched him to a two-stop race under the Safety Car and then he got hit by debris when the Ferraris got together.

“Sergio switched to a two-stop race early on and took advantage of the chaotic final laps to finish in ninth place. We face an uphill task in Abu Dhabi to reclaim sixth place in the Constructors’ Championship, but we will go there fighting and give it everything.”