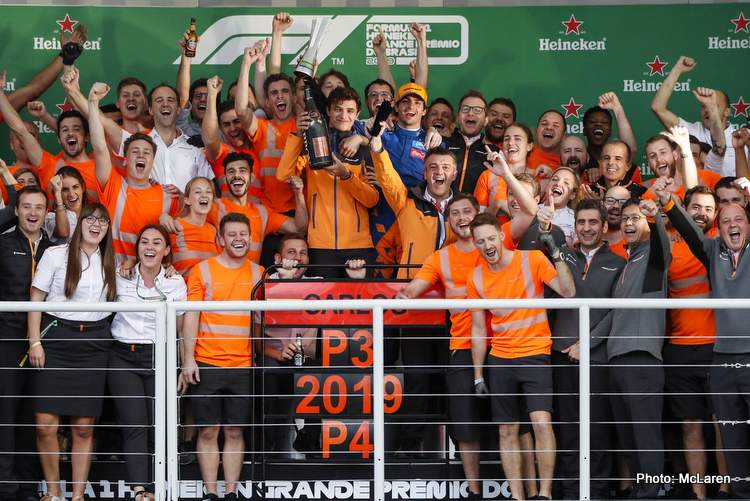 McLaren report from the Brazilian Grand Prix, Round 20 of the 2019 Formula 1 World Championship, at Autódromo José Carlos Pace in Interlagos, Sao Paulo.

P3. Carlos Sainz: “Yes! What a day! It’s a weird first podium not being there straight after the race, but I’m extremely happy with our race today. To finish P3 coming all the way from the back of the grid was a big challenge, but we fought until the end with everything we had! It was a very eventful race and I think I was the only car to do a one-stop strategy. It was really difficult to hold the other midfield cars behind after the two Safety Car re-starts, but I managed to defend my position well and took advantage of what happened at the front of the race.

“A good first stint, a great pit-stop from the guys and a very challenging and long stint to bring it home and finish P3 for the first time in my career. Congrats to the whole team, here and back in Woking! My first podium is obviously very special but we need to keep pushing to step up there on pure pace! That’s what we’re really here for, that has to be our goal!”

P8. Lando Norris: “A tough, long race, a good result for the team and awesome for Carlos. My first stint was alright, apart from getting boxed-in at the start, and my pace was okay. I boxed onto the Hard tyre and struggled, I just didn’t seem to get them working at all.

“I was then fortunate with the Safety Car allowing me to make up positions after stopping again for Mediums. Carlos on the podium, both cars in the points, is a great reward for everyone here and at the factory who have worked hard for Carlos and I this weekend.”

Andreas Seidl, Team Principal: “P4 in the Constructors’ World Championship for McLaren secured. First podium for Carlos in his F1 career and first podium for McLaren since 2014. What an amazing achievement for the entire team back home in the factory plus here at the track, and for Carlos and Lando after putting in so much hard work throughout the year.

“Big, big thank you to every single member of the team. We woke up this morning after a difficult Saturday with a clear commitment to never give up and fight back. We executed well today as a team, we had some difficult strategy decisions to make, did great pit-stops, had two brilliant race drivers in the cars and in the end deserved to score this P3 and P8 after the cars at the front were dropping out.

“We keep our heads down and now focus on securing our positions in the Drivers’ World Championship. The achievement this year together with the podium today is the perfect motivation for all of us to keep working hard in order to score podiums again in the future for McLaren based on our own outright performance.”