Haas: A disappointing race we had hoped for more 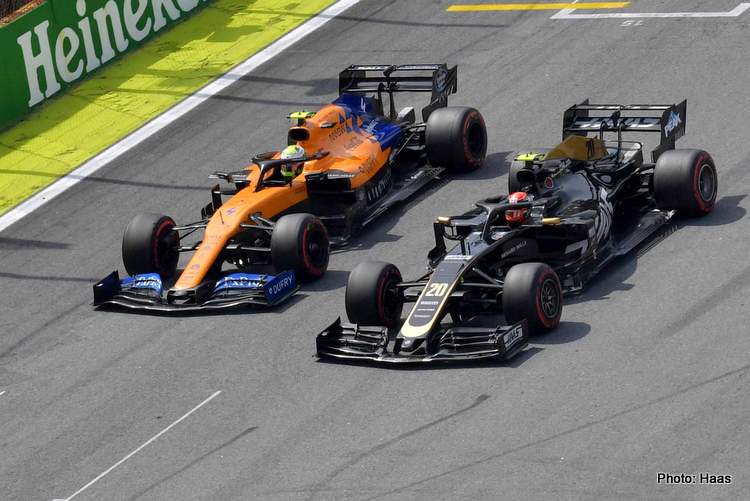 Both Haas F1 drivers started on Pirelli P Zero Red soft tires and both held position from their grid positions of seventh for Grosjean and ninth for Magnussen during the opening three laps before Alfa Romeo driver Kimi Raikkonen and Scuderia Ferrari driver Charles Leclerc were able to slip past the duo by lap four, dropping them to ninth and 11th.

Magnussen dropped another couple of positions over the unfolding laps and was battling to keep Renault driver Daniel Ricciardo from 13th when the two made contact around the fast, left-hand turn four that sent Magnussen spinning off track on lap eight.

The Haas driver was able to continue with minimal left-front wing damage and resumed in 19th place before quickly picking up a pair of positions and settling into 17th. Ricciardo was subsequently issued a five-second penalty for avoidable contact.

Meanwhile, Grosjean held his relative position and was up to sixth when he pitted on lap 27 for a set of Yellow medium tires, resuming in 17th and then moving forward several positions before settling in at 12th by lap 30. Magnussen made his pit stop from 15th for medium rubber on lap 29 and resumed in 18th.

Grosjean moved up to 11th and Magnussen to 17th when Ricciardo served his five-second penalty during his second pit stop on lap 41. As several of the front-runners began executing two-stop strategies ahead of him, Grosjean briefly crept as high as seventh on lap 49 before dropping back down to eighth a lap later.

The order shuffled considerably as the result of a safety car period for the stopped Mercedes of Valtteri Bottas in the turn-four runoff, during which Magnussen pitted for a new set of soft tires and dropped to 17th while Grosjean stayed on track in seventh place.

On the lap-60 restart, Grosjean dropped four positions to 11th, encountering an MGU-K (Motor Generator Unit Kinetic) issue as the pack charged the line, while Magnussen dropped back to 18th.

Grosjean was later called to the pits for a set of soft tires that would take him to the finish. He resumed in 18th but graduated up to 15th after Leclerc and his Scuderia Ferrari teammate Sebastian Vettel collided and saw their day end prematurely and prompting another safety car period. Magnussen, meanwhile, moved up to 12th.

The safety car exited the track to set up a final, two-lap shootout, during which Magnussen advanced to his finishing position of 11th and Grosjean to 13th.

The final event on the 2019 FIA Formula One World Championship calendar is the Abu Dhabi Grand Prix on Dec. 1 at Yas Marina Circuit.

P13. Romain Grosjean: “First of all, I’m very happy for Pierre (Gasly), it’s good to see him on the podium. I’m very happy for him. I was the last Frenchman on the podium four years ago. As for us today, we just didn’t get any luck. We were doing the race of our life, we were hanging on in there in P7 with a car that doesn’t deserve that. We were doing an amazing job and then the safety car fell at exactly the wrong time for us. The tires at the restart were just tired from a long stint. We knew we could go to the end, but then Sainz pushed me wide at the restart into turn two. I’m not very happy about that. We pushed the car to the limit today, it just wasn’t our time.”

P11. Kevin Magnussen: “It’s a shame, this feels like a missed opportunity for the team today – it just didn’t go our way. I got turned around at the beginning of the race and lost a lot of positions, I then had damage on the front wing. At the safety car later, everyone else was just a lot stronger than us at the restart, I just didn’t have enough to hang onto it. I got passed and ultimately missed out on the points by just one place – which doesn’t feel good.”

Guenther Steiner, Team Principal: “Obviously it was a disappointing race, we had hoped for more, and it had looked like we might get it. Kevin (Magnussen) was spun out by Ricciardo, so his race was basically over, it put him back a lot. Romain (Grosjean) was doing a good job and our plan was to do a one-stop race. On the restart we had an MGU-K issue and he was overtaken by a lot of people. From there onwards it was just going backwards. Unfortunately, we started in the top ten but ended up outside of the top ten. We know we’re in a difficult position with the car. There’s one more race to go, then hopefully we can come back stronger next year.”

Magnussen continues for now, with the incident under investigation#BrazilGP 🇧🇷 #F1 pic.twitter.com/Mq1kO7c0Ht