Binotto: Leclerc and Vettel need to feel sorry for Ferrari 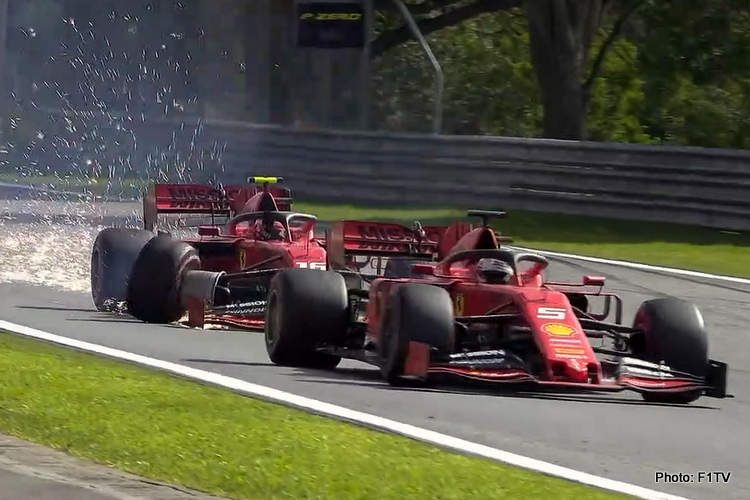 The red-hot driver rivalry at Ferrari just got turned up a notch are two after Sebastian Vettel and Charles Leclerc collided on lap 66 of an enthralling and unpredictable Brazilian Grand Prix, as a result neither finished the race.

The team reported after the race at Interlagos, “The incident that put the two SF90s out of the running took place on lap 66, six laps after the restart following the Safety Car period following Valtteri Bottas’ retirement.

“The top five were all very close at that point and at the first corner, Leclerc passed Vettel to go fourth. But the German tucked in behind his team-mate to try and repass him. On the straight before turn 3, the two men collided and both had to retire. A very unsatisfactory end to the penultimate race of the season.”

It was another episode in the feud that won’t go away between the two drivers on an afternoon when a podium or two might have been a target considering Vettel’s front-row start and Leclerc scything his way through the field.

Again, it ended in crimson faces for the Reds and exacerbates a crisis that appears to have no end, one which Ferrari team principal Mattia Binotto is failing to manage.

The question to be asked is: why Vettel on older tyres was allowed to re-pass Leclerc, on fresher rubber, when the two were on different strategies at that point?

Leclerc said of the incident, “Everything happened very quickly. From my side I overtook into Turn 1, I enjoyed this overtake, and then in Turn 3, I [was] too close because I was aware Seb would try again and he did and he went round the outside where there was little space.”

“I left the space, which he took, and then towards the end of the straight he started to squeeze me a little bit to the inside and we were very close and as soon as he went to the inside we touched and I got a puncture,” added the 22-year-old.

While Leclerc was talkative, Vettel fuming and not in the mood for a chat when he gave his version, “I didn’t have much space on the right and, obviously, I had a better run out of Turn 2, tried to pass in Turn 3 and that was it. Obviously, it’s a shame for the team we didn’t finish the race. That has priority.”

“I think when [drivers crash] at the end both of them have got at least a small or small percentage of responsibility. But I don’t want to judge now and give my own opinion on the crash in the heat. There will be time to judge and we will do that together,” added the Ferrari team principal.

This saga is not over by a long way.