Toro Rosso: There’s Quite a Bit for Us to Work On 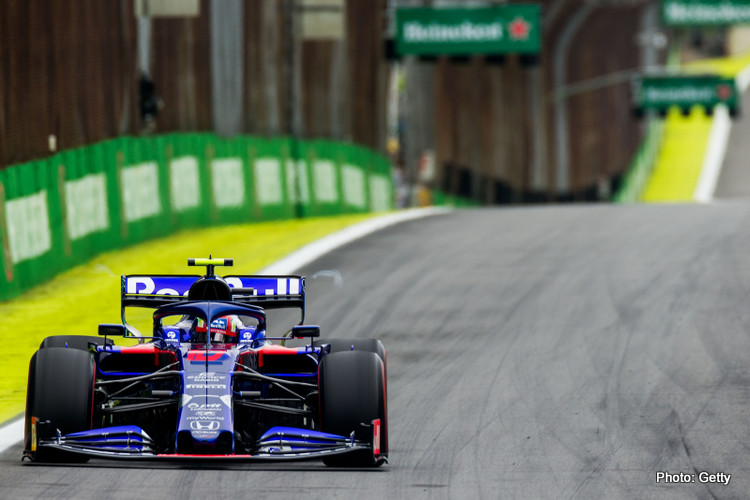 Toro Rosso report from Friday at the Brazilian Grand Prix, round 20 of the 2019 FIA Formula 1 World Championship.

Pierre Gasly (STR14-04, Car 10)
First Practice Session
Best lap: 1:18.100, pos. 8th, 17 laps
Second Practice Session
Best lap: 1:10.352, pos. 12th, 26 laps
“It was good fun driving in the wet this morning, it’s been a while since we’ve had these kinds of conditions, so it was good to get a feeling in the wet with the Toro Rosso. Everything felt ok this morning, but it won’t be so useful as the rest of the weekend should stay dry. In FP2 we had good pace on the Prime tyre, then on the Soft I hit some traffic, so I wasn’t able to get a good clean lap. I think it’s going to be tight tomorrow between P6 and P15 as there’s only three tenths in it, so we need to make sure we have a clean run and put everything together for Qualifying because the midfield is very close. It’s going to be an exciting day tomorrow. Towards the end of FP2 we had an issue with the engine, so we had to stop a bit before the end of the session which meant we lost a few laps on the long run, but that’s how it is sometimes. We’ll bounce back tomorrow as we still have enough laps from today to make the right choices for the rest of the weekend.”

Daniil Kvyat (STR14-03, Car 26)
First Practice Session
Best lap: 1:18.274, pos. 9th, 16 laps
Second Practice Session
Best lap: 1:10.424, pos. 14th, 34 laps
“In the end we had a productive session until the moment when the car switched itself off. We now need to find out what the problem was, but until then I think it was a solid session. We understood the track well and the requirements needed for tomorrow to go faster, so we will work hard overnight and try to improve tomorrow.”

Jonathan Eddolls (Chief Race Engineer):
“We came to Brazil with quite an extensive test matrix planned for FP1, but the heavy rain in the morning meant we had to cancel the test items as it’s very difficult to test in the wet, particularly at this time of the season and especially on the aero side. We completed some laps on the full Wets and the track dried pretty quickly to Intermediate conditions, so we ran to get a view of competitiveness and balance – the car was performing quite well which was positive. The rain stopped and towards the end of the session it looked like the conditions were ready for the dry tyre, so we went out on slicks along with a few other teams, but if anything it was a little bit too early, particularly on the high working range C3 tyre. We were struggling to get the tyres working and as we saw, Alex spun off which meant we weren’t able to get a timed lap. We reverted the cars to a dry setup for FP2 and had quite a bit of work to catch up on that we hadn’t completed in FP1. We did the low fuel runs on Prime and then Option. With the low temperatures, it was quite a struggle to get the tyres into a good working window. We were looking competitive on the Prime, but less so on the Options, so that’s something for us to work on, particularly for tomorrow. However, the weather forecast is looking better and the temperature will be higher, so it’s not necessarily relevant from today. On the long runs, the pace was looking pretty reasonable on both cars, but unfortunately, we’ve had an issue on the PU side for Pierre, which cut his long run short. Then towards the end of the session, there was some problem with Dany’s car where it completely shut down, and it looks like that’s what caused his spin. We lost all data and connection, so we have to investigate the cause for it. There’s quite a bit for us to work on ahead of tomorrow, and there’ll be quite some work for the mechanics tonight.”

Toyoharu Tanabe (Honda F1 Technical Director):
“The first half of FP1 was run on a very wet track, but then it began to dry and we could do more running. It was unfortunate that Alex crashed when he tried a run on dry tyres, but the team managed to fix the damage in time for him to go out in FP2. Track conditions were much better in the afternoon, providing more useful data. Towards the end of the session, the ICE on Gasly’s car failed and then Kvyat crashed due to a complete shutdown and with the team, we are now investigating the cause of both these problems. However, they have no effect on the rest of the weekend from a PU point of view, as both of them were running “Friday only” PUs, due to be changed tonight.”