Renault: We didn’t have that pace so we paid the price 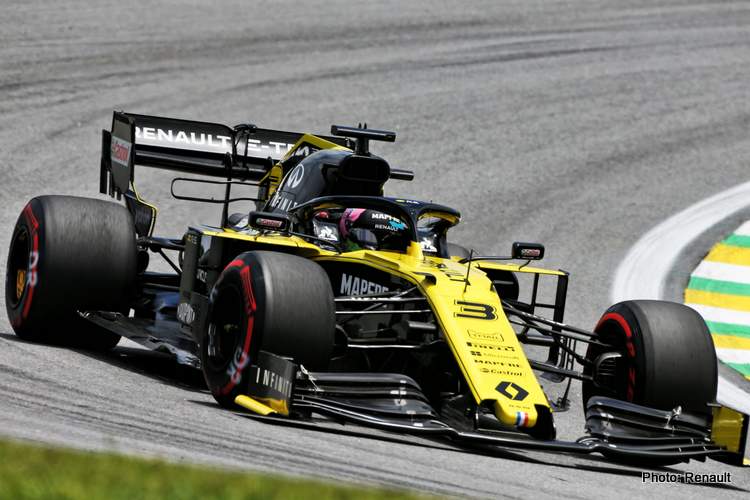 Renault F1 Team will line up outside the top ten for tomorrow’s Brazilian Grand Prix after an extraordinarily tight qualifying at Interlagos.

P14. Nico Hülkenberg: “The midfield is super tight, and we just couldn’t extract enough pace today. It was nip and tuck and only a few hundredths would have seen us into Q3. It’s a short lap here and my second run in Q2 was clean, but we just lacked that extra bit of pace which would have seen us comfortably through. It makes our life tough for tomorrow, but I’m somewhat optimistic as our race pace has been better recently. Coming from the back of the midfield and sitting in dirty air is never easy, but we’ll fight and give it our all tomorrow.”

P12: Daniel Ricciardo: “It’s been really close in the midfield this week and today was no exception. It’s a short lap, not many corners, so everything has to go right. It wasn’t perfect from us today but I like these battles and the fact that it is so close. I struggled a bit on the last run in Q2, our tyres overheated a little bit, but that’s the way it is. We would have liked Q3, but it’s not a disaster and I’m excited for the race. We have a free choice of tyres and I think there will be some opportunities in front of us to progress up the order and take some points.”

Alan Permane, Sporting Director: “We knew this was going to be a tough circuit for us but there were just less than two-tenths covering the entire midfield and we are at the end of it. If we found two-tenths we could have been as high as seventh. We didn’t have that pace today, so we paid the price, but we have 71 laps to put it right in the race tomorrow. Temperatures are forecast to be a lot hotter and our race pace and excellent tyre management we’ve seen in the last couple of races means there is every chance to have a decent result here.”