Renault: There Are Areas We Feel We Can Improve 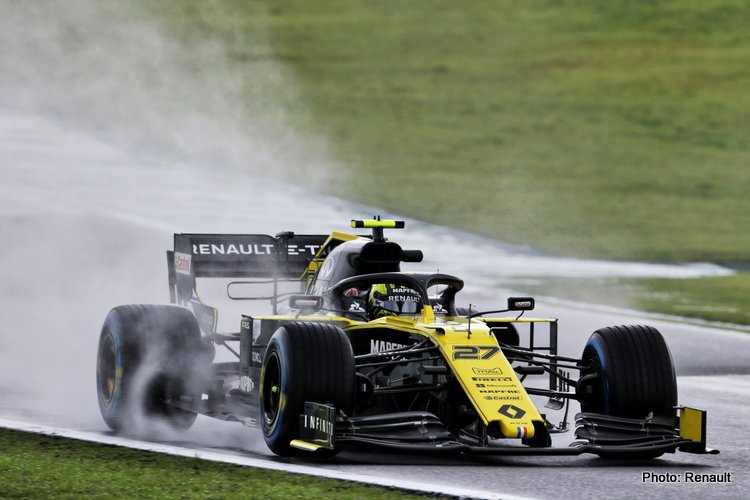 Renault report from Friday at the Brazilian Grand Prix, round 20 of the 2019 FIA Formula 1 World Championship.

Daniel Ricciardo finished seventh across both Free Practice sessions with Nico Hülkenberg sixth in the morning – under wet conditions – and eleventh in the afternoon.

A number of red flags meant running was intermittent, but nevertheless the team managed a total of 80 laps throughout the day.

Alan Permane Technical programme notes
• The programme for today included striking a comfortable balance between aero performance and ride at a circuit notorious for its elevation changes and bumps.
• Free Practice 1 was largely compromised due to the wet weather, but, both drivers completed a handful of laps on the Intermediate tyre (green) to bed themselves in again at this circuit and get a feel for the car. The team opted not to attempt a run on dry tyres at the end of the session due to the damp conditions.
• Conditions dried for the afternoon session with Daniel first out on Pirelli’s Hard tyres (C1, white) and Nico on Mediums (C2, yellow).
• After completing their first dry runs of the day, both cars completed low fuel runs on Softs (C3, red) before focusing on the usual race simulation.
• The long runs seemed positive in relation to our competition.

What we learned today:
We’ve made a bright start to the weekend despite the stop-start nature of today’s practice.

Nico: “I think today, on the whole, was pretty decent. For a Friday, I’m quite happy. It was a short morning with just one run on the Intermediates; it felt a bit limited but still good to be out on track and get a feel for the car in the wet conditions. The afternoon was a little rushed, quite intense with the red flags, but the car felt good. We had some minor balance issues, but the baseline seems fine and the pace is there.”

Daniel: “The day began with some wet running, which was actually quite beneficial. I haven’t done too many laps in the rain in this car, so it was nice to learn a bit in that aspect. The start of the afternoon was quite difficult on the Hard tyre and cool conditions, which meant grip levels weren’t quite there. We put the Soft on after that and found a bit of time and that was positive. Our long runs seemed okay and I think we’re in a pretty good place.”

Alan Permane, Sporting Director:
“Obviously, it was a slightly compromised Friday with a wet first session, but we ran a set of Intermediates on both cars and both drivers were pretty happy and competitive. We’re not expecting rain for the rest of the weekend, but you never know at this track. The afternoon was also decent as we ran a fairly conventional programme. It’s always close here as it’s a short lap, but there are areas we feel we can improve the car. As has been the case recently, our long runs look competitive. We’ve focused a bit more on trying to find some one-lap pace and that looks to be paying off.”