Mercedes: A Promising Start to the Weekend 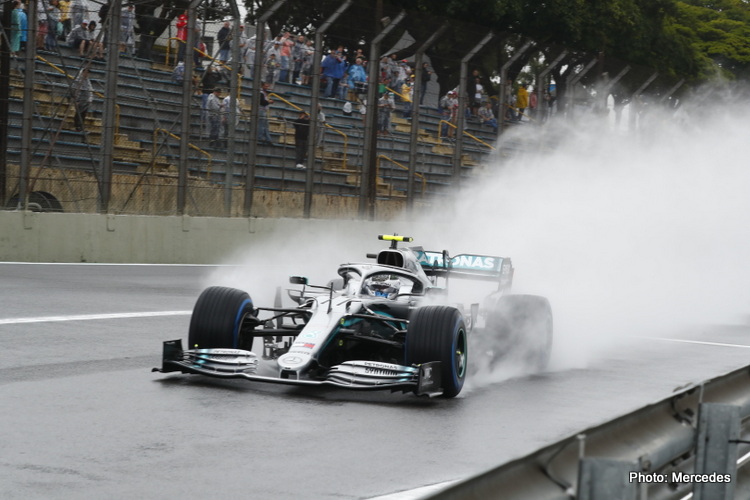 Mercedes report from Friday at the Brazilian Grand Prix, round 20 of the 2019 FIA Formula 1 World Championship.

Mercedes-AMG Petronas Motorsport gearing up for a close fight at Interlagos:

Valtteri Bottas
The running in FP1 was compromised a bit owing to the weather, but the forecast for the weekend is looking better. I got a few laps in in the morning to do a bit of a systems check, but that was it. The conditions in FP2 were a lot better, so we managed to do a good programme in the afternoon. I started on the Hard tyre to collect some data but it was tricky on a green track with that compound. We then switched to the Soft tyre which changed the behaviour of the car quite a bit and we made a good step forward in terms of grip levels. I had a bit of traffic in my fast laps and the times at the top look very close, so I think we are actually more competitive than the standings might suggest. I think both Ferrari and Red Bull look very strong, but we should be right up there as well, so I’m looking forward to a good fight.

Lewis Hamilton
I didn’t really go out in the first session when the track was wet. The afternoon session was nice and smooth, we started on a good baseline and made a couple of adjustments in the short space of time that we had in that session. We will do more work tonight to refine the car which is going to be quite crucial as we only really have two sessions to get it right for qualifying, so it’s compacted a little more and we need to be a little bit more precise with the changes that we make. But we started off on the right foot, so we should be ok to progress forward.

James Allison
After a fairly washed out first session it was nice to get the car running in the second session and broadly it was a good day. The car is reasonably well balanced and it looks pretty useful on the long-run simulations. We’ve got a little bit to find in the short runs ahead of qualifying tomorrow so we’ve got some work to do overnight. We’ve also got some thinking to do because although it was dry this afternoon, the track and air temperatures are not going to be representative of Sunday. But all in all it’s been a promising start to the weekend.