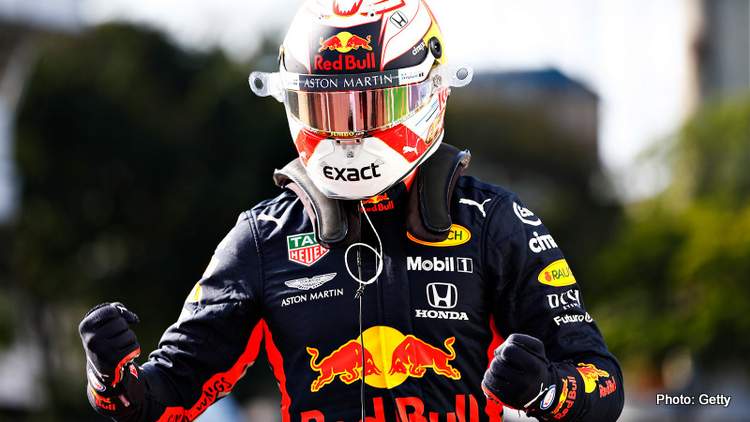 The Dutchman was supreme on Saturday afternoon as he powered in the Red Bull to his second career pole and a memorable one it will be too as he delivered high-end stuff on a tricky afternoon.

His first Q3 attempt was hampered by some serious kerb hopping, but Verstappen kept it planted and topped the timing screens at that point despite the shenanigans.

Those few hundredths that went missing, with his first effort, he found on his second run of 1:07.508 which was good enough for the top spot start for tomorrow’s race.

In comparison, Alex Albon was four-tenths down on his teammate on pole. That’s how mega Max was on the day. The Thai rookie not quite finding the sweetspot since he crashed after topping the times in FP1 on Friday.

Verstappen said afterwards, “The car was really good. The track temperature was changing so we had to adjust to that but straight away from Q1, the car was flying and really enjoyable to drive, so I’m really happy with this pole position.

“I tried a different line but the track was a bit warmer, so it gave me a bit of oversteer and went wide but the second lap, luckily, was a bit better, so it was all good. Of course, I’ll try to finish it off tomorrow,” added the pole-winner.

Ferrari chased gamely but even with those horses in full song their drivers Sebastian Vettel and Charles Leclerc had to settle for second and fourth on the time screens, with the latter set to drop ten positions for a PU change.

Vettel looked back on his session, “I had a bit of a wobble at the exit of the last corner on the last run, but Max improved his time so fair play. It’s his pole position.

“I’m happy with the front row, now we’ll see what we can do tomorrow. The car has been good, it got better through qualifying, so hopefully, we can keep that momentum for the race.

“It will be difficult. Both Red Bull and Mercedes look a bit stronger managing tyres, but we are there for a reason. We’ve got the speed, we’ve got the power, so let’s see what the race brings. I’m carefully optimistic,” added the German.

Mercedes were short on firepower [did I actually just write that!] but, as usual, Lewis Hamilton gave it all to snatch third with his final shot, a couple of tenths better than Valtteri Bottas in the sister car who ended fifth fastest.

Hamilton summed up, “Congrats to Max, a great lap by him. We seemed to be quite competitive in P3 and then we seemed to lose in qualifying or they gained. Nonetheless, I’m really happy I was able to divide the Ferraris, it’s always a tough challenge.

“We’re been down on power I guess compared to the others. I gave it absolutely everything. My best lap of the session was the last one so, awesome,” added the six-time F1 World Champion.

Behind Albon in seventh was Pierre Gasly, best of the rest in the Toro Rosso, albeit 1.4 seconds down on the top time and well ahead of teammate Daniil Kvyat who failed to make it out of Q1.

At the wrong end of the spectrum, it was a miserable afternoon for the Renault-powered brigade. First Carlos Sainz’s McLaren lost power on his out lap, forcing him to pit where the McLaren remained stranded and out of contention.

His teammate Lando Norris was quickest of the quartet, but only good for 11th ahead of the two works drivers Daniel Ricciardo in 12th and Nico Hulkenberg 14th. The pair 1.4 seconds shy of the best time in Q2. No Renault-powered car made Q3.

Notably, the driver starting from pole has won five of the last six Brazilian Grands Prix…

VERSTAPPEN: “Straight away from Q1 the car was flying, that was an enjoyable drive. We are very happy with this, I’ll try to finish it off now”#BrazilGP 🇧🇷 #F1 pic.twitter.com/81FOEqvcYH 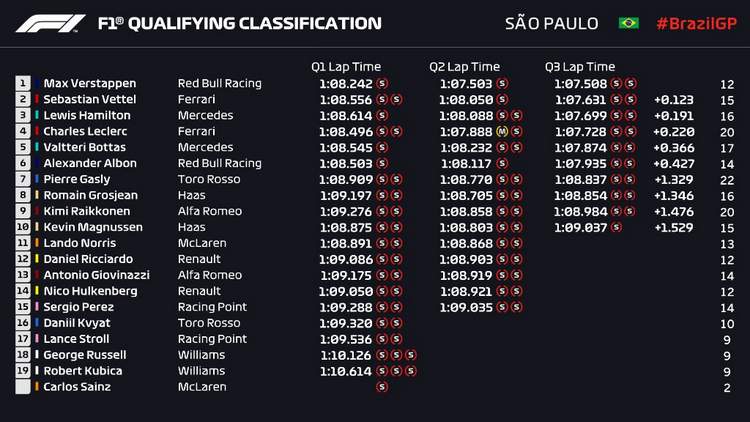