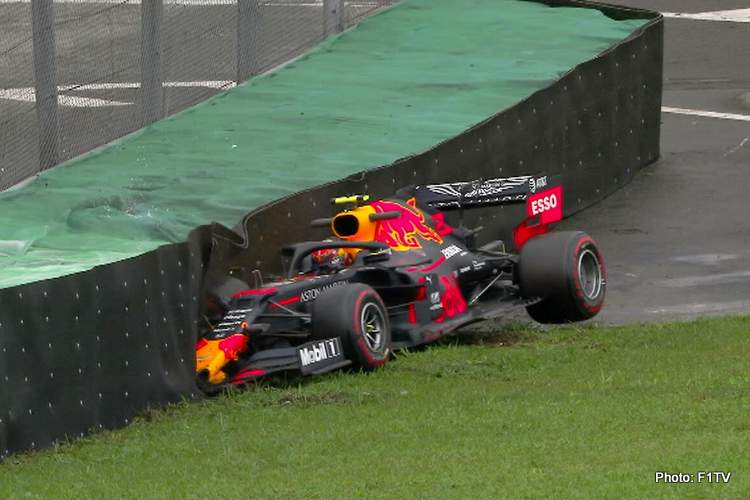 Alex Albon topped the timing screen at the end of the first free practice session of the Brazilian Grand Prix weekend, Round 20 of the 2019 Formula 1 World Championship, at Autódromo José Carlos Pace in Interlagos, Sao Paulo.

But the Red Bull rookie slid off in Turn 1 during the final minutes and hit the wall after earlier topping the timing screens with a best effort of 1:16.142 on a damp track.

At almost the same time, his teammate Max Verstappen ventured out on Pirelli softs with six minutes to go and spun as he descended the hill out of the first turn complex. Earlier in the same spot, Toro Rosso’s Daniel Kvyat was also a victim in what was a ‘Keystone Cops’ style session for the energy drinks boys.

Valtteri Bottas was second fastest in the Mercedes, but in reality, times were meaningless on a morning when venturing out on to the track was not worth the risk as the final minutes testified.

Verstappen only went out in the final few minutes, with Lewis Hamilton following suit in his Mercedes, but the world champion’s efforts on the red band slicks did not get started thanks to the red flags when the Bulls went on the rampage.

Neither Hamilton and Verstappen did not set a time.

McLaren’s Carlos Sainz headed the Renault powered brigade with the fifth-fastest time, ahead of the Renault duo of Nico Hulkenberg and Daniel Ricciardo in sixth and seventh respectively.

Next up were Toro Rosso pair of Pierre Gasly in eighth and Daniil Kvyat ninth. McLaren’s Lando Norris rounded out the top ten in what was a relatively meaningless session.

Like Hamilton and Verstappen, Sergio Perez (Racing Point) and Romain Grosjean (Haas) did not set times. 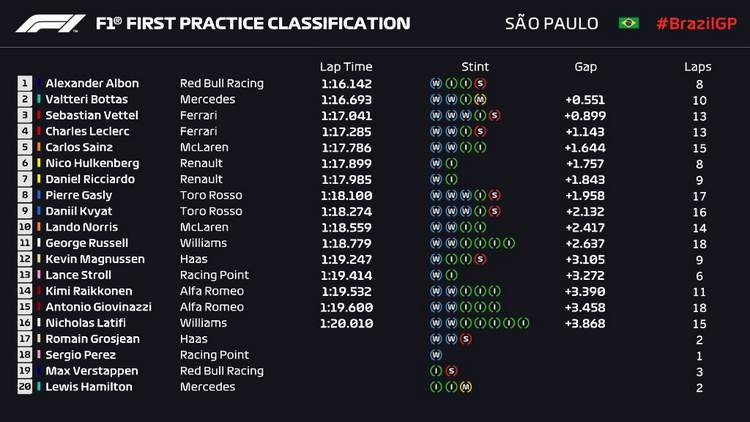