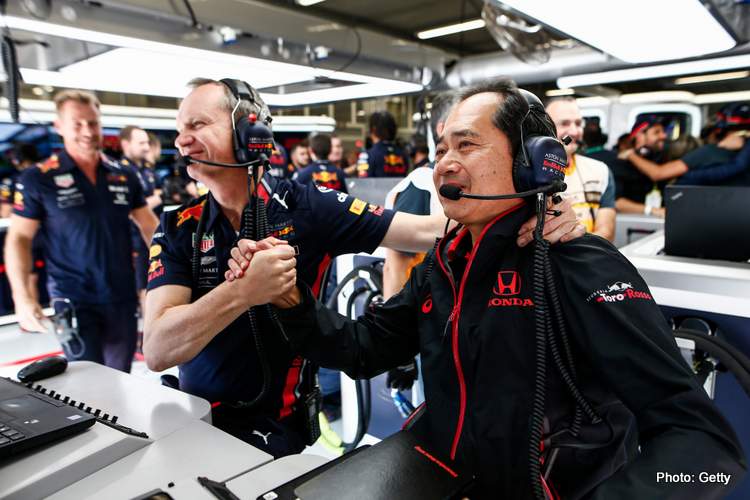 Aston Martin Red Bull Racing and Honda secured the second pole position of the partnership courtesy of a superb performance from Max at the Brazilian Grand Prix, 28 years on since Honda’s last Pole position in Sao Paulo with Ayrton Senna.

Q1 at Interlagos saw three of the four Honda-powered cars advance safely, with Daniil, unfortunately, dropping out by just 0.03s. In an extremely close midfield battle, he admitted a few mistakes added to a tricky car balance made the difference, as Max, Alex and Pierre all progressed.

The second part of qualifying saw the two Red Bulls comfortably through while Pierre pulled out an excellent lap to ensure he joined them in eighth place as 0.3s covered seventh to 15th. It was a performance Pierre replicated in Q3 as he secured the best of the rest spot of seventh place behind the Red Bull, Ferrari and Mercedes cars, with a grid penalty for Charles Leclerc due to a power unit change meaning Pierre will start from sixth.

That means he will line up alongside Alex on the third row, as Alex recovered from a tricky FP3 to finish just 0.4s away from pole position. The close nature of the battle at the front was highlighted by the fact that was only good enough for sixth fastest in qualifying, but Max produced an excellent final lap to pull over 0.1s clear of the rest of the field and take the second pole position of his career.

Toyoharu Tanabe, Technical Director: “A brilliant result today! Max was competitive all weekend and took his and our second pole position of the season. Alex was also competitive to finish sixth on his first visit to this technically tricky track.

“Pierre Gasly ensured we have three Honda-powered cars in the top ten. Daniil was unlucky to make a small mistake and get no further than Q1, but his long run pace looks good, so everything is in place for us to have an excellent result tomorrow. It’s worth noting this was Pierre’s fourth consecutive top ten qualifying result.

“It will be a long race, over the 71 laps and we will now ensure we are as well prepared as possible in the hope of converting today’s strong performance into another one tomorrow.”