Haas: Everyone’s worked hard for this and we never give up 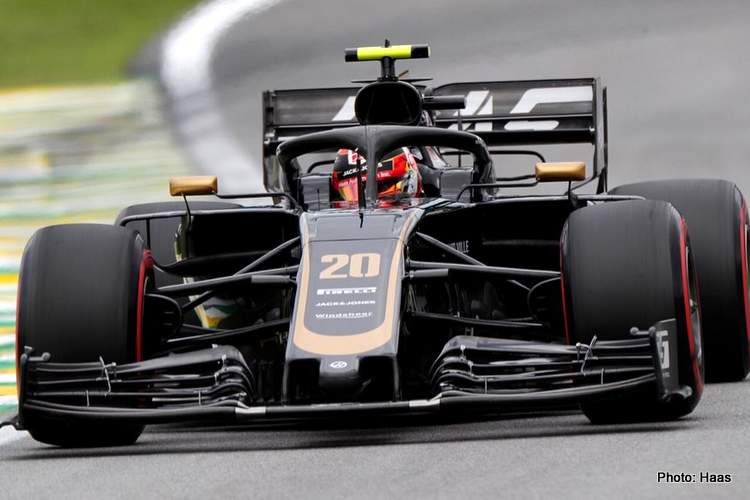 Grosjean and Magnussen will, however, start from seventh and ninth on the grid, respectively, as Charles Leclerc (Scuderi Ferrari), who qualified fourth, will take a 10-place grid penalty for an engine change.

Grosjean qualified eighth in Q3, posting a lap time of 1:08.854 following an earlier lap on a set of scrubbed softs. Magnussen claimed tenth with a lap of 1:09.037.

Both Grosjean and Magnussen ran exclusively on the Pirelli P Zero Red soft tire throughout qualifying.

P8. Romain Grosjean: “It was a brilliant job by the team. Having both cars in Q3 is unbelievable. Tomorrow might be a different day, but that doesn’t matter, we’ll take the pleasure from today. We didn’t really get to show the speed we had in final practice. I had confidence that we might be around P11. Then obviously Q2 went really well, and Q3 wasn’t too bad. We were only two-hundredths of a second off being best-of-the-rest. I’m happy for the team, it’s a brilliant job from everyone.”

P10. Kevin Magnussen: “It’s good to have both cars in Q3 again. It looks like we might have something to fight with this weekend, which is really good. There’s nothing to be disappointed about from today. The circuit and conditions were right for our car. It’s been very up-and-down all the way through the year, so it’s not a surprise that we can do this. I’ll be more surprised if we can finish it off tomorrow, we know we struggle a little bit with tire management in the race. We’ll certainly be giving it our all though.”

Guenther Steiner, Team Principal: “FP3 didn’t look good on the timesheets but we knew what was possible today. I think in qualifying the whole team and the drivers did a great job to get everything out of the car. It was a fantastic execution of a qualifying session with some fantastic drives. It’s good for the team, everyone’s worked hard for this, and we never give up. We keep on fighting and today we’ve had a good result. Hopefully, tomorrow we can do something, for sure we’ll be trying.”