Ferrari: Second and fourth is still a good result 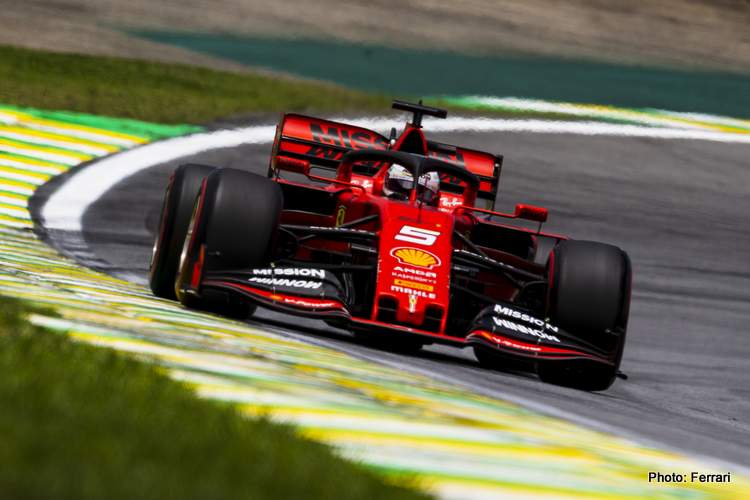 Qualifying for the Brazilian Grand Prix, that gets underway tomorrow at 14.10 local time (18.10 CET), once again saw the pair of SF90s in the running for pole right up until the final moments.

Sebastian Vettel will start from the front row in second place alongside Max Verstappen, while Charles Leclerc will line up fourteenth, with a ten-place penalty for having fitted a new engine this weekend.

The Monegasque driver will be hoping to play a strategic game given that he will start on a different tyre compound to the majority of drivers that start ahead of him.

Q2. In the second session, the two drivers ran different strategies: Sebastian ran the Softs, the majority choice, while Charles chose the Mediums with the intention of running a different race strategy, maybe staying out on track longer to move up the order as the others pitted. He managed it perfectly stopping the clocks in 1’07”888, which was actually better than Sebastian’s time of 1’08”050, so that both moved forward to the top ten shootout.

Q3. In the final part of qualifying, both Ferrari drivers went quickest on their first runs. Sebastian did a 1’07”631, to line up on the front row next to Verstappen, while Charles’ 1’07”728 was good enough for fourth, but he starts from the seventh row and will be on the attack.

P2. Sebastian Vettel: “Max put in a strong lap and so we can be happy with a front-row start. I think our performance matched our expectations and it is good that our lap time was reasonably close. It puts us in a good position for tomorrow.

We improved the car, it felt better and it was coming alive in quali, I am reasonably optimistic that we are in good shape for the race, but we will have to wait and see. It is supposed to be a bit warmer and it will be important to look after the tyres and to make the right strategy calls.

It will also be key to get a good start. The weather is unpredictable here in Interlagos, there could be sunshine but it might rain. 71 laps means it’s a long race and I think it will be fun.”

(P4) P14. Charles Leclerc: “It was not the best qualifying. The team gave me a great car and I believe that the potential was there for us to take pole today. I am disappointed about the mistake I made on the last corner of my first lap in Q3, because I lost about three tenths there. It doesn’t change too much though because I will be starting from the midfield tomorrow due to the grid penalty we have received.

“We completed some high fuel runs this morning to work on our race pace, as this is where we have the most room for improvement. We will do our best to apply what we learned there tomorrow. It’s good that we qualified on the medium tyres and I hope that we will be able to gain an advantage and pass some of the cars ahead. It won’t be an easy race and I will give the maximum to make up as many places as possible and hopefully fight for a podium.”

Mattia Binotto Team Principal: “As usual here in Brazil, because of the very short lap length, qualifying was really close with very small gaps between the cars. Max deserved pole, but the group behind him is split by just a few tenths and hundredths. As for our performance, second and fourth is still a good result and Seb can have a good race starting from the front row.

“It’s shame Charles has to start further down the order tomorrow. At least he is on the Medium tyres which suited him and that will be important in the first stint, because we expect that tyre to perform more consistently and be less susceptible to the effects of temperature. He did a good lap, apart from a mistake in the final corner and but for that, I think he could have set the fastest time.

“We know anything can happen tomorrow and we will try and run a good race. The track is evolving a lot, given that this morning it was very different to yesterday. In qualifying, our drivers felt the car was working better than in FP3, when we concentrated on car balance to best manage tyre degradation, but it’s hard to predict what might happen in the race.”